We previously reported a 2013 case of intraabdominal abscesses and bacteremia caused by a multidrug-resistant anaerobe identified as Bacteroides fragilis (1). In brief, unremitting abdominal pain developed in a 71-year-old man who had been traveling in India for 1 month. The man was hospitalized locally and subsequently received a diagnosis of metastatic colon adenocarcinoma. He returned to Seattle, Washington, USA, for treatment consisting of 5 cycles of chemotherapy, followed by right hemicolectomy and right hepatectomy. On postoperative day 4, the patient showed marked leukocytosis, and abdominal abscesses were noted on computed tomographic scan images. Cultured percutaneous drainage fluid grew Escherichia coli that was resistant to ampicillin, trimethoprim/sulfamethoxazole, and fluoroquinolones. Therapy was then limited to ceftriaxone, and the patient’s leukocyte count continued to rise and fever returned. Blood cultures grew anaerobic gram-negative rods identified as B. fragilis by MALDI-TOF (matrix-assisted laser desorption ionization-time of flight) mass spectrometry and 16S rRNA sequencing. New rim-enhancing fluid collections in the abdomen and pelvis were noted on computed tomographic scan images, and percutaneous drainage fluid from these collections grew 3+ (moderate) quantities of B. fragilis. Isolates from blood culture and abscess fluid were resistant to multiple classes of antimicrobial drugs, including metronidazole and imipenem (Table). The abscesses ultimately resolved after treatment for 60 days with linezolid and empiric ertapenem. 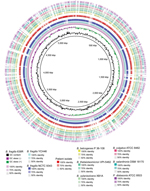 Figure. Characterization of circular plot of genome diversity between the clinical isolate of a multidrug-resistant, novel Bacteroides genomospecies and other Bacteroides spp. isolates. Reading from the center outwards, the map, GC content,...

Initial comparison of the clinical isolate with the 3 completed B. fragilis reference genomes (638R, YCH46, NCTC 9343) showed a high degree of sequence divergence (Figure). We expanded our analysis to other sequenced Bacteroides species and observed similar results (Figure). An average nucleotide identity by BLAST (http://blast.ncbi.nlm.nih.gov/Blast.cgi) (ANIb) analysis (4) was performed (Technical Appendix Table 1). Of note, pairwise ANIb values of <95% have been used as the cutoff for circumscribing species (4). The clinical isolate demonstrated pairwise ANIb values of 86.28%–86.54% against B. fragilis reference strains and even lower values compared with other Bacteroides species. In contrast, divergence among the 3 B. fragilis reference strains averaged 98.64% identity. These data are consistent with the conclusion that the isolate represents a genomospecies distinct from B. fragilis. This relationship was confirmed by using a BLAST search of the assembly against the nonredundant NCBI (National Center for Biotechnology Information) sequence database that contains published bacterial sequences; confirmation of the relationship indicated that the organism most closely resembles B. fragilis 638R and is not better classified as an alternative species already present in GenBank.

We explored the basis of the isolate’s antimicrobial resistance by performing a BLAST search of the assembly against a database of previously described known factors (6) (Technical Appendix Table 2). Carbapenem resistance in B. fragilis has been shown to result from up-regulation of the cfiA metallo-β-lactamase (7), and we identified homologs of 2 β-lactamases, cfxA and cfiA13, in the clinical isolate (the latter of which had an upstream insertion sequence). Although the exact mechanism of metronidazole resistance is unknown, it has been attributed to chromosomally or plasmid-encoded nitroimidazole resistance (nim) genes encoding nitroimidazole reductase (8–10). Although we did not detect homologs of canonical genes nimA–J, 2 putative nitroimidazole resistance genes were identifiable on the basis of functional annotation (10). We also detected ermF (macrolide resistance) and tetQ genes (tetracycline resistance). The isolate had a substitution in gyrA (Ser82 to Phe) known to confer resistance to fluoroquinolones (11). The draft genome (GenBank accession no. JANI00000000) and sequence reads (Sequence Read Archive accession no. SRP045260) are publicly accessible.

Members of the Bacteroides genus constitute a large fraction of the human gut microbiome and are important opportunistic pathogens that can cause a variety of serious infections. Metronidazole is thought to be almost universally effective against the species: only 1 of 1,957 B. fragilis clinical isolates collected across the United States during 2006–2009 was resistant to metronidazole (12). Similarly, previous studies have shown a prevalence of only ≈1% of carbapenem-resistant B. fragilis (13), making this a favored second-line treatment (7). Nevertheless, there are limited but increasing reports of concomitant metronidazole and carbapenem resistance (14), and such resistance poses a threat to current treatment algorithms.

Genomic sequencing revealed the isolate in this study to be a genomospecies related to, but distinct from, B. fragilis. Techniques widely accepted as highly accurate for bacterial identification (16S rRNA sequencing and MALDI-TOF mass spectrometry) incorrectly identified this organism as B. fragilis (1). To determine whether previous multidrug-resistant isolates identified as B. fragilis might instead represent this novel genomospecies, we compared ANIb values for other isolates with those of the clinical isolate in our study. ANIb values indicate that 2 of the multidrug-resistant B. fragilis isolates sequenced in an earlier report (10) actually appear to be members of the genomospecies reported here (Technical Appendix Table 3). Furthermore, these data highlight the potential for whole-genome sequencing to improve diagnostic accuracy in microbial identification and isolate characterization. Although we detected several antimicrobial drug–resistance factors in this isolate, alternative mechanisms of resistance to carbapenems and metronidazole, including non-cfiA–mediated carbapenem resistance and overexpression of efflux genes, respectively, have been also described and may contribute to the high levels of resistance observed with this isolate.

The increasing prevalence of carbapenem-resistant Enterobacteriaceae worldwide poses a major public health concern, often requiring use of more toxic “last-line agents,” such as colistin and polymyxin B. Although rare thus far, multidrug-resistant Bacteroides infections present a similar challenge to the treating physician and have the potential to become increasingly common in the future. Thus, providers should be aware of the possibility for concomitant carbapenem and metronidazole resistance in these organisms. Future studies will be required to determine what proportion of multidrug-resistant isolates can be ascribed to the novel genomospecies of Bacteroides reported here and whether this particular genomospecies offers any opportunities for targeted therapies.

This work was supported in part by the National Center for Advancing Translational Sciences of the National Institutes of Health (grant no. UL1TR000423).