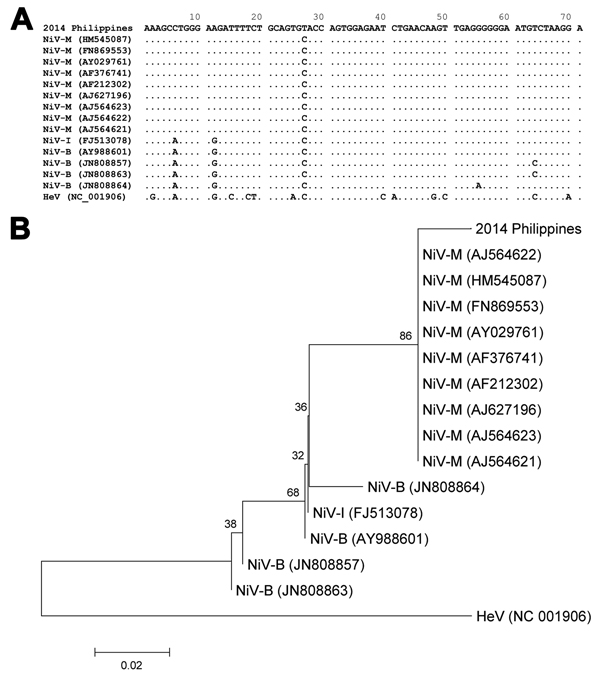 Figure 2. Alignment (A) and phylogenetic relationship (B) of partial phosphoprotein gene sequences (71 mer) of henipaviruses, including the fragment obtained by next-generation sequencing from a patient in Philippines (2014 Philippines). The alignment was conducted by using the MUSCLE program (http://www.ebi.ac.uk/Tools/msa/muscle/), and the phylogenetic tree from these data was constructed by using the neighbor-joining method. The optimal tree with sum of branch length equal to 0.23440320 is shown. The percentage of replicate trees in which the associated taxa clustered together in the bootstrap test (1,000 replicates) are shown. The phylogenetic tree is drawn to scale; branch lengths in the same units as those of the evolutionary distances are used to infer the phylogenetic tree. The scale bar represents 0.02 substitutions per site. The evolutionary distances were computed by using the Kimura 2-parameter method and are presented as number of base substitutions per site. The analysis involved 16-nt sequences. All positions containing gaps and missing data were eliminated. The final dataset contained 71 positions. Evolutionary analyses were conducted by using MEGA6 (http://www.megasoftware.net). The accession numbers of each sequence are shown for the viruses. HeV, Hendra virus. NiV-B, Nipah virus Bangladesh strain; NiV-I, Nipah virus Indian strain; NiV-M, Nipah virus Malaysian strain.