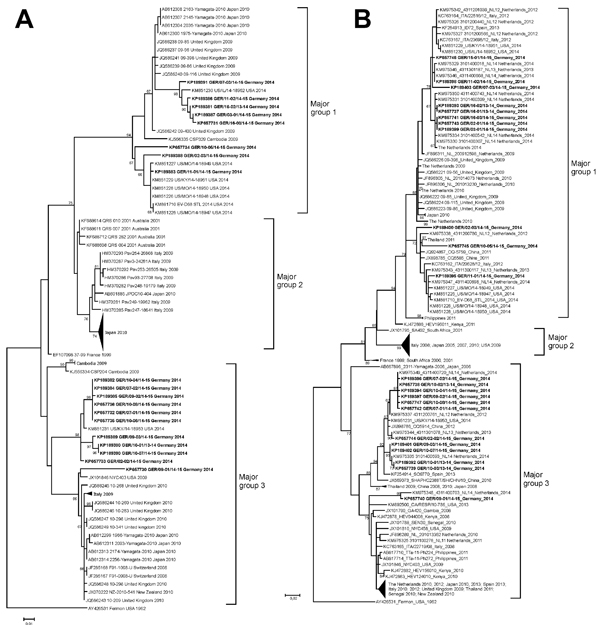 Figure 2. Phylogenetic analysis of selected enterovirus D68 (EV-D68) strains based on nucleotide sequences of A) partial viral protein (VP) 4/VP2 region (357 nt) corresponding to nt 733–1089 in the Fermon strain (GenBank accession no. AY426531); and B) partial VP1 region (339 nt) corresponding to nt 2521–2859 in the Fermon strain. Trees were constructed by using maximum-likelihood estimation (Tamura 3-parameter with 5 gamma distributed rates among sites) with 1,000 replicates through MEGA 5.2 (http://www.megasoftware.net/). The Fermon strain was used as an outgroup. Reference sequences were selected from the United States, countries in Europe, and other regions, mainly during 2005–2014. Selected reference sequences are not identical in both trees because complementary VP1 and VP4/VP2 sequence data are not available for all reference viruses. Major groups 1, 2, and 3 are shown as described by Meijer et al. (13,14). Only bootstrap values >65% are shown at branch nodes. EV-D68 strains from Germany are indicated in bold. Scale bar indicate nucleotide substitutions per site. Some parts of the trees are collapsed. For an expanded version of , sees the Technical Appendix.