We used physician sentinel surveillance to identify 25 (7.7%) mild to severe infections with enterovirus D68 (EV-D68) in children and adults among 325 outpatients with acute respiratory infections in Germany during August–October 2014. Results suggested low-level circulation of enterovirus D68 in Germany. Viruses were characterized by sequencing viral protein (VP) 1 and VP4/VP2 genomic regions.

During mid-August 2014–January 2015, the United States and Canada had nationwide outbreaks of EV-D68 infections associated with severe respiratory disease (6,7). The US Centers for Disease Control and Prevention and state public health laboratories confirmed 1,153 persons in 49 states and the District of Columbia infected by EV-D68 (8). Over the same period, >200 specimens tested were positive for EV-D68 throughout Canada (7). Clinical symptoms ranged from mild to severe disease requiring intensive care and mechanical ventilation. Children were predominantly affected, in particular if they had asthma or wheezing (6,9). After ARIs, symptoms of neurologic illness or acute flaccid myelitis developed in an increasing number of children (10,11).

To describe EV-D68 circulation in a large country in Europe in the fall of 2014, we investigated specimens from patients with respiratory illness for EV-D68. This investigation was conducted within the national outpatient ARI sentinel surveillance in Germany.

Nasal swab specimens from outpatients with influenza-like illness (ILI), ARI, or both were collected by sentinel physicians participating in sentinel surveillance in Germany during weeks 32–44 in 2014 and sent to the Robert Koch Institute (Berlin, Germany). All specimens were tested in parallel for respiratory viruses, including influenza viruses A and B, rhinovirus/enterovirus, respiratory syncytial virus, adenovirus, and metapneumovirus by specific real-time reverse transcription PCRs (Technical Appendix). The rhinovirus/enterovirus real-time PCR detected rhinovirus at a limit of detection of 26 copies/reaction. EV-D68 was identified at a slightly lower sensitivity of 118 copies/reaction.

Rhinovirus/enterovirus was detected in 44% (143/325) of the specimens; 98 were identified as rhinovirus types A–C and 25 as EV-D68. The remaining 20 specimens could not be subtyped, but were negative for EV-D68 by using the specific PCR. The proportion of EV-D68 corresponded to 7.7% of the study collective. EV-D68 was initially detected from week 36 (August) through 38 (September) and continuously from week 41 through week 44 in October (Figure 1).

In addition to the other viruses tested, EV-D68–positive specimens were screened for parainfluenza virus 1–4, coronaviruses (NL63, OC43, HKU1, 229E), and bocavirus. None of these viruses was detected in EV-D68–positive patients, which suggested that EV-D68 played a major role in causing respiratory disease.

Major symptoms associated with EV-D68 infection included sudden onset, fever/shivers, cough, and sore throat (Table 1). Pneumonia was diagnosed in a 7-year-old boy and a 10-year-old girl, and a 2-year-old girl was hospitalized because of obstructive bronchitis. For 11 (44%) of 25 case-patients, a concurrent chronic condition was reported: 5 with a respiratory condition, 3 with a cardiac condition, 2 with diabetes, and 1 with a neurologic disorder. EV-D68 was detected in 10 children and 15 adults; 56% of these patients were male.

Patients infected with EV-D68 came from different federal states in Germany; no epidemic cluster or outbreak was detected in the context of these patients. Syndromic surveillance data of corresponding sentinel practices showed only a partial coincidence of EV-D68–positive patients and an increase of ARI activity in the practice. However, the increase in ARI activity was probably caused by unrelated RV activity. 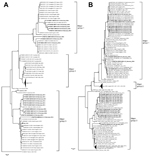 Phylogenetic analysis of EV-D68 strains detected in Germany was conducted for the VP1 and the VP4/VP2 genomic regions (Figure 2). Analysis placed EV-D68 isolates from Germany into major groups 1 or 3 and clustered with strains from the United States and the Netherlands from 2014, which indicated circulation of similar strains in the United States and Europe.

In the 2014 outbreak in the United States, ≈36% (2,600) of specimens were positive for EV-D68; children were predominantly affected. Because testing was prioritized for children with severe respiratory illness, there were probably more cases of mild infections (8). Information on EV-D68 circulation during this period for Europe is rare. This finding might be caused by insufficient sampling of patients with ARI or limited detection of EV-D68 by laboratory diagnostics (9). Sporadic cases of neurologic disease after EV-D68 infection were reported from France and the United Kingdom (9,10).

Clinical patterns in patients in Germany were largely determined by the ILI/ARI case definition for collecting specimens. Most (88%) patients had mild disease. Severe disease was observed in 3 children who had obstructive bronchitis and pneumonia, and 1 child required hospital care. Similarly, mild respiratory disease was predominantly observed for patients in the Netherlands (14). However, more severe cases were detected among hospitalized children who had life-threatening respiratory illness, as described in the United States (6,12,14). More than half of patients with severe respiratory illness in Germany and the Netherlands had concurrent conditions (12,14), which seem to be a major factor for development of severe disease after EV-D68 infection (6).

Phylogenetic analysis of EV-D68 from Germany showed high similarity with current strains from the United States and the Netherlands (12,14). These new genetic clusters reflect the evolution of EV-D68 and might be associated with an increasing activity of this virus. For an improved understanding of the factors determining local and temporal differences in respiratory disease outbreaks, continuous collection of global data by representative surveillance systems is needed.

Dr. Reiche is a staff scientist in the Division of Influenza Viruses and Other Respiratory Viruses, National Reference Centre for Influenza, Robert Koch Institute, Berlin, Germany. Her research focuses on molecular epidemiology and characterization of respiratory viruses and evaluation of diagnostic methods.