A previously healthy man from eastern Kansas, USA, sought medical care in late spring because of a history of tick bite, fever, and fatigue. The patient had thrombocytopenia and leukopenia and was given doxycycline for a presumed tickborne illness. His condition did not improve. Multiorgan failure developed, and he died 11 days after illness onset from cardiopulmonary arrest. Molecular and serologic testing results for known tickborne pathogens were negative. However, testing of a specimen for antibodies against Heartland virus by using plaque reduction neutralization indicated the presence of another virus. Next-generation sequencing and phylogenetic analysis identified the virus as a novel member of the genus Thogotovirus.

The genus Thogotovirus (family Orthomyxoviridae) contains >6 distinct viruses, including Araguari, Aransas Bay, Dhori, Jos, Thogoto, and Upolu viruses (1–3). These viruses have been primarily associated with either hard or soft ticks and have a wide geographic distribution (1–8). The only virus in this genus known to occur in the United States is Aransas Bay virus, which was isolated from soft ticks (Ornithodoros spp.) collected from a seabird nest off the coast of Texas (3).

Two viruses in the genus Thogotovirus (Thogoto and Dhori viruses) are currently known to cause human infection and disease. Antibodies against Thogoto virus have been identified in humans living in parts of Europe, Asia, and Africa (1,4,6,8). Two persons from Nigeria infected with this virus were identified in 1966. The first patient was a man with a febrile illness in whom neuromyelitis optica later developed. The second patient was a 14-year-old boy in whom meningitis developed and who died 6 days later because of complications of sickle cell disease (9).

Antibodies against Dhori virus in humans have been reported in a similar distribution as those against Thogoto virus (1,6,8,10). Five patients with disease have been described after accidental laboratory exposure to Dhori virus; encephalitis developed in 2 of these patients (11). We report a novel Thogotovirus associated with a febrile illness and death that occurred in a man in the United States in 2014.

The patient was a previously healthy man >50 years of age from Bourbon County, Kansas, USA. While working outdoors on his property in late spring 2014, the patient had several tick bites and found an engorged tick on his shoulder several days before he became ill with nausea, weakness, and diarrhea. The following day, a fever, anorexia, chills, headache, myalgia, and arthralgia developed. On the third day of illness, the patient went to his primary care physician, who empirically prescribed doxycycline for a presumed tickborne illness because of his history of tick bites, symptoms, and no reported travel outside the immediate area. The following morning, the patient’s wife found him obtunded (experiencing reduced consciousness) but arousable. He was taken by ambulance to a local hospital.

At the hospital, he had a temperature of 37.3°C, a pulse rate of 84 beats/min, and an increased blood pressure of 151/65 mm Hg. The patient had a papular rash on his trunk, but otherwise results of his physical examination were unremarkable. Initial laboratory findings showed leukopenia (2,200 cells/μL), lymphopenia (absolute lymphocyte count 550 cells/μL), thrombocytopenia (72,000 cells/μL), mild hyponatremia (sodium 133 mmol/L), hypokalemia (potassium 3.0 mmol/L), a creatinine level (0.8 mg/dL) within the reference range (0.6 mg/dL–1.2 mg/dL), a slightly increased level of blood urea nitrogen (25 μg/dL), and increased levels of aspartate aminotransferase (138 U/L) and alanine aminotransferase (86 U/L). He was admitted because of the principal problems of dehydration, syncope, and possible tickborne illness. He was given an intravenous (IV) fluid bolus, then maintenance fluids, and doxycycline (200 mg IV every 12 h for the first 24 h, then 100 mg IV every 12 h).

At initial assessment at the tertiary care center, the patient was febrile (temperature 39.4°C) and had a nontender left axillary lymphadenopathy; a diffuse maculopapular rash on his chest, abdomen, and back; petechiae on his soft palate and lower extremities; and bibasilar crackles in the lung fields. Laboratory testing continued to show mild leukopenia (3,600 cells/μL) but also showed worsening thrombocytopenia (34,000 cells/μL). His renal function was normal, but his aspartate aminotransferase level had increased to 119 U/L. Doxycycline treatment (100 mg IV every 12 h) was continued, and the patient was evaluated further for a potential etiology of his illness.

Because of increasing supplemental oxygen needs and progressive lactic acidosis, he was transferred to the intensive care unit and given broad-spectrum antimicrobial drugs on day 10 of his illness. His renal function began to deteriorate and his aminotransferase levels continued to increase. The patient was intubated because of acute respiratory distress syndrome and was given 3 vasopressor medications because of shock. The patient subsequently had sustained ventricular tachycardia with persistent hypotension and eventual pulseless electrical activity with refractory shock. After multiple resuscitations, the decision was made to withdraw further care, and he died shortly after being extubated, 11 days after first becoming ill. An autopsy was not performed.

At CDC, EDTA-treated blood, along with serum separated from that blood, were tested for Heartland viral RNA and neutralizing antibodies by real-time reverse transcription PCR (RT-PCR) and plaque reduction neutralization test (PRNT) with 6-well plates with confluent Vero E6 monolayers, according to protocols described elsewhere (12,13). Standard virus isolation methods were also used. In brief, 200 μL of undiluted and 1:10 dilutions of blood or serum specimens were inoculated onto confluent Vero cells in T25 flasks. Inoculated flasks were then incubated at 37°C and reviewed for cytopathic effect daily.

Isolation and Identification of Virus in Blood and Serum

Figure 1. Plaque reduction neutralization test of patient sample for Heartland virus, showing images of the same well obtained days 6, 7, and 8 postinoculation at a dilution of 1:20. Arrows with single...

Blood and serum showed negative results for Heartland viral RNA and antibodies against this virus. However, heterologous viral (non–Heartland viral) plaques were noted in PRNT cell culture wells, which indicated the presence of another virus (Figure 1). Standard virus isolation methods showed a substantial cytopathic effect at day 3 postinoculation in cells that were inoculated with blood or serum specimens. These findings were confirmed by repeated isolation attempts. 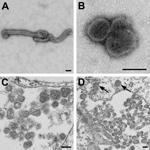 Figure 2. Electron microscopic images of novel Thogotovirus isolate. Filamentous (A) and spherical (B) virus particles with distinct surface projection are visible in culture supernatant that was fixed in 2.5% paraformaldehyde. Thin-section specimens... 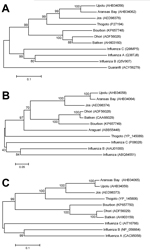 Figure 3. Phylogenies of deduced amino acid sequences of representative genes of Bourbon virus in comparison to homologous sequences of selected orthomyxoviruses. A neighbor-joining method was used for inference of each phylogeny with...

Three phylogenies, each generated by a neighbor-joining method applied with 2,000 bootstrap replicates for grouping analysis, were chosen as representative of overall genetic relationships of selected viruses (Figure 3). The novel virus was found to group with strong support along with Dhori virus, and the closely related Batken virus, in all trees.

Using traditional techniques (i.e., PRNT and culturing on animal cells) in combination with NGS, we isolated a novel virus from a blood sample collected 9 days after illness onset from a previously healthy man. It is likely that this novel Thogotovirus, which we are proposing to call Bourbon virus after the county of residence of the patient, was the cause of his illness. Although it is unclear what role the virus played in the death of the patient, the high level of viremia, as shown by multiple isolations from the blood of the patient 2 days before his death, suggests that this might have contributed to the death of the patient.

The patient had a history of tick exposure, as well as symptoms and laboratory findings (i.e., leukopenia and thrombocytopenia) consistent with a tickborne illness. Several tickborne pathogens, such as Ehrlichia chaffensis, Rickettsia, and Heartland virus, are present in eastern Kansas and adjacent areas (17–19). However, the patient did not respond to doxycycline therapy initiated 3 days after illness onset and had negative results for these and other tickborne pathogens.

Of the 7 symptomatic human infections that have been associated with viruses in the genus Thogotovirus, most case-patients have had neurologic findings (e.g., meningitis, encephalitis) without any described abnormalities in blood counts (9,11). Although cerebrospinal fluid was not tested for the patient reported, his clinical signs and symptoms were not suggestive of neurologic infection. Furthermore, the patient did not have any respiratory symptoms that would be expected with other viruses that are known human pathogens in the large family of Orthomyxoviridae, such as influenza virus (1).

Phylogenetic analyses indicated that Bourbon virus is most closely related to Dhori and Batken viruses. However, the branch lengths suggest a relatively distant evolutionary distinction of Bourbon virus from Dhori and Batken viruses, which have only been described in the Eastern Hemisphere. Dhori, Batken, and Thogoto viruses have been identified in various hard tick species (1). However, Batken virus also has been identified in mosquitoes (1). It is currently unknown how Bourbon virus is transmitted to humans. However, illness onset of the patient in late spring and a history of finding an embedded tick before becoming ill support the notion that Bourbon virus might be transmitted by ticks. Therefore, to potentially prevent Bourbon virus disease, as well as other tickborne diseases, persons should be advised to avoid tick bites by using an insect repellent registered with the US Environmental Protection Agency to be effective against ticks, wearing long sleeves and pants, avoiding bushy and wooded areas, and performing tick checks after spending time outdoors.

The discovery of Bourbon virus, in addition to recent discoveries of tick-associated Heartland and severe fever with thrombocytopenia syndrome viruses (19,20), suggests that the public health burden of these pathogens has been underestimated. As nonselective molecular methods of pathogen identification (i.e., NGS sequencing) become more widely used, ideally in combination with classical microbiologic techniques, it is anticipated that similar discoveries will be made in the future.

It is currently not known how many human infections and disease cases might be attributable to this novel pathogen. On the basis of limited information for our case-patient, health care providers might consider Bourbon virus as a potential infectious etiology in patients in whom fever, leukopenia, and thrombocytopenia develop without a more likely explanation and who have shown negative results for other tickborne diseases (e.g., ehrlichiosis, anaplasmosis, or Heartland virus disease) or have not responded to doxycycline therapy. Work is planned to identify additional human infections with this novel virus, as well as to explore its potential geographic distribution. Also, more comprehensive virologic characterizations and field work are ongoing to better understand the biology of, and to identify potential vectors and reservoirs for, Bourbon virus. These data will be critical to further characterize the epidemiology and illness caused by Bourbon virus and to implement potential prevention and control measures.

Ms. Kosoy is a microbiologist at the Arboviral Diseases Branch, Division of Vector-Borne Diseases, Centers for Disease Control and Prevention, Fort Collins, Colorado. Her research interests are diagnosis of arboviral diseases and biology of arboviruses.

We thank Jason Velez for preparing cells; Kristen Burkhalter, Jan Pohl, Roger Nasci, Nicky Sulaiman, and Emily Pau for facilitation of development of the rapid Bourbon real-time RT-PCR; Amanda Panella for assistance with handling the samples; and Robert S. Lanciotti, Ingrid Rabe, and Marc Fischer for their input on diagnostic evaluation, and review of the manuscript.

Page created: April 19, 2015
Page updated: April 19, 2015
Page reviewed: April 19, 2015
The conclusions, findings, and opinions expressed by authors contributing to this journal do not necessarily reflect the official position of the U.S. Department of Health and Human Services, the Public Health Service, the Centers for Disease Control and Prevention, or the authors' affiliated institutions. Use of trade names is for identification only and does not imply endorsement by any of the groups named above.