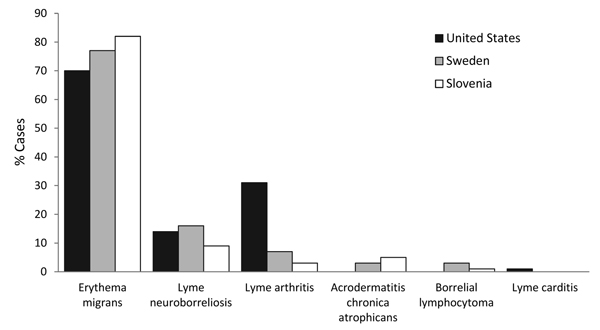 Figure. Comparison of frequency of clinical manifestations in Lyme borreliosis cases between the United States and 2 countries in Europe. Data from the United States are based on 154,405 patients identified during 2001–2010 by Centers for Disease Control and Prevention surveillance (1). Cases in Europe are represented by data from southern Sweden (1,471 patients, 1992–1993) (2) and Slovenia (1,020 patients, 2000) (3). The category Lyme neuroborreliosis includes all neurologic manifestations, such as radiculoneuropathy, facial palsy, and meningitis or encephalitis. Some patients had >1 manifestation.