To the Editor: Tickborne relapsing fever (TBRF) is endemic in Iran; >1,400 cases were confirmed in 19 provinces during 1997–2006 (1). In the western, northwestern, and foothill regions of the Alborz Mountains, the Argasid soft tick Ornithodoros tholozani is commonplace and accounts for ≈60% of TBRF cases attributed to Borrelia persica. However, in central and western Iran, O. tholozani and B. microti–infected O. erraticus ticks coexist (1,2). Two other Borrelia species, B. latyschewii and B. baltazardi, have also been described in northeastern and northwestern Iran (3,4), but no recent human infections with these species have been documented. Cases of TBRF occurring in southern Iran have presumably been caused by B. microti because its tick vector, O. erraticus, predominates in this region.

Relapsing fever infections in Hormozgan Province in southern Iran are commonly identified during routine checks for malaria. During 2011–2013, blood samples were obtained from 14 febrile patients referred to medical centers in Jask and Rodan in Hormozgan Province (Technical Appendix Figure). Informed verbal consent was obtained from all participants, and the ethical committee of Pasteur Institute of Iran approved the project. Patients seeking care had fever and >1 sign or symptom, such as headache, chills, sweating, or fatigue. Six patients reported recurrent fever and generalized muscle and joint pain. Each patient lived in a local tent, called a kapar, or in a brick or concrete-block house.

Thick and thin blood smears were prepared from blood samples, stained with Giemsa, and examined. None showed malaria parasites; however, spirochetes were observed in thick or thin smears from 3 patients (Technical Appendix Table). Patients whose samples tested positive by microscopy were treated with 500 mg tetracycline every 6 hours for 10 days and became afebrile. 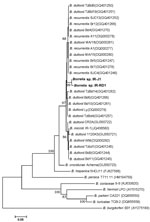 Figure. Phylogenetic tree of Borrelia spp. strains isolated in Iran, 2014. Constructed on the basis of intergenic spacer sequences, the tree is drawn to scale using evolutionary distance computed using the...

DNA was extracted from patients’ serum samples by using the Miniprep DNA kit (QIAGEN, Hilden, Germany) and screened for borrelia DNA by using real-time PCR; negative and positive control DNA from B. microti or B. persica was also screened. Borrelia spp. DNA was detected in 5 (36%) of 14 serum samples (Technical Appendix Table). Of these 5 samples, 2 were also positive by nested PCR that targeted the intergenic spacer (IGS) region (5). The 2 IGS regions were sequenced (ABI-3130XL sequencer; Applied Biosystems, Foster City, CA, USA) in both directions at the Pasteur Institute of Iran. The resulting 539- and 527-bp IGS sequences (GenBank accession nos. KM271987 and KM271988, respectively) were 97% homologous with B. recurrentis and B. duttonii from Africa (GenBank accession nos. CP000993 and DQ000280, respectively); 96% homologous with B. microti from Iran (GenBank accession no. JQ436580); and 92% homologous with B. crocidurae from Africa (GenBank accession no. GU350723). A neighbor-joining phylogenetic tree was constructed by using MEGA6 (http://www.megasoftware.net); the 2 IGS sequences clustered into a distinct group separate from B. microti, B. duttonii, and B. recurrentis genotypes (Figure).

B. microti was expected to be found because O. tholozani ticks that transmit B. persica are not seen in southern Iran, but B. microti–infected O. erraticus ticks have been frequently recovered from rodents’ burrows in the region (6). Current molecular data from TBRF borreliae from Iran are limited to 2 isolates of B. persica and B. microti from O. tholozani and O. erraticus ticks, respectively (5,7,8). In situ IGS analysis revealed that spirochetes in our analysis had highest homology (97%) with relapsing fever agents from eastern Africa, B. duttonii and B. recurrentis, followed by B. microti (96%) from Iran (8). B. microti clustered with 1 strain (B. duttonii; GenBank accession no. GU350721) and apart from other B. duttonii IGS strains, suggesting that this strain may not be B. duttonii. The phylogenetic tree separated B. duttonii into 4 clades, 2 of which also contained B. recurrentis, confirming previous observations (9) and providing further support that B. recurrentis represents an ecotype of B. duttonii rather than a species (10). Furthermore, the high level of phylogenetic similarity among borreliae from eastern Africa and Iran indicates that the borreliae in our study might represent ecotype-adapted strains. More sequencing of different genomic markers is required to substantiate or refute this possibility. Lack of GenBank data for the remaining borreliae from Iran, B. latyschewii and B. baltazardi, prevent exclusion of these species.

Although relapsing fever spirochetes from southern Iran and those from borreliae in Africa have a close phylogenetic similarity, they have different virulence levels and abilities to infect vector and host species. Consequently, deciphering the evolutionary links for these Borrelia spp. is of paramount importance and might provide valued insights into host–microbe interactions.

Our report confirms a novel Borrelia IGS sequence type detected in situ from 2 relapsing fever patients. This species showed greatest homology with the relapsing fever borreliae from Africa, B. recurrentis and B. duttonii, but not with B. microti, which is transmitted by O. erraticus ticks, previously believed to be the only soft tick species in this region. These findings challenge the assumption that TBRF in Iran is attributed to only B. persica or B. microti.

We thank Gholam Mohseni, the late technical supervisor at Bandar Abbas Health Research Station, Tehran University of Medical Sciences, for his contributions to this study.

This study was partially funded by the Pasteur Institute of Iran and by the Center for Disease Control, Ministry of Health and Medical Education, Tehran, Iran (grant no. 749).