White-nose syndrome has devastated bat populations in eastern North America. In Midwestern United States, prevalence increased quickly in the first year of invasion (2012–13) but with low population declines. In the second year (2013–14), environmental contamination led to earlier infection and high population declines. Interventions must be implemented before or soon after fungal invasion to prevent population collapse.

Invasion of novel wildlife diseases has caused widespread declines or species extinction among birds, amphibians, and mammals (1–4). White-nose syndrome (WNS), caused by the fungal pathogen Pseudogymnoascus destructans, is a recently emerged disease of hibernating bats (5) that has caused substantial declines in 6 species; bats of 2 species are predicted to become globally extinct (3). In little brown bats (Myotis lucifugus), tissue damage from fungal infection results in a cascade of physiologic disruptions resulting in death 70–100 days after infection (6).

To test our hypothesis, we studied the invasion dynamics of the WNS fungus by sampling bats of 5 species at 2 hibernacula in central Illinois, USA. We collected samples twice each winter for 2 years (2012–13 and 2013–14). The hibernacula were moderately sized (5–10 hectares, 2–5 m high) abandoned limestone mines that bats use for fall mating and hibernation from September through April. During each visit, we counted all visible bats at each site, which produced complete census data for 4 of the 5 species. Accurately collecting census data for bats of the remaining species (Eptesicus fuscus) was difficult because these bats, unlike those of other species, roosted primarily behind crumbling slabs of rock around mine entrances, which were dangerous and difficult to survey.

During each site visit we sampled 15–20 bats of each species by epidermal swabbing (7). We also sampled the wall or ceiling of hibernacula under, near (10–20 cm), and far from (>2 m) roosting bats by using the same swabbing technique. Samples were tested for P. destructans by using real-time PCR (9); according to a serial dilution experiment, the limit of detection was ≈50 conidia.

Figure 1. Pseudogymnoascus destructans prevalence (±1 SE, calculated from the variance of a binomial distribution sample) over 2 winters, 2012–13 and 2013–14, at 2 sites (diamonds and triangles) in Illinois, USA, on bats... 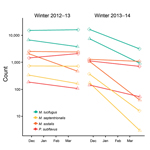 Over these 2 years, the effect of WNS on bat populations mirrored the patterns of P. destructans prevalence. During the first winter, declines were limited at the larger site and moderate (50%–75%) at the smaller site (Figure 2). In contrast, over the second winter, counts of M. septentrionalis bats declined by 95%–99% and M. lucifugus bats by 81%–88% (20,000 bats of this species disappeared) (Figure 2, panel A). Populations of bats of the 2 other species also experienced moderate to severe declines in the second year (M. sodalis, 16%–96%; P. subflavus, 47%–73%) (Figure 2, panel B). Declines probably resulted from disease-related deaths because high hibernacula site fidelity makes emigration unlikely (10) and substantial numbers of dead bats were observed at both sites.

Early in the first winter studied, prevalence of P. destructans was very low, and although transmission resulted in most bats harboring P. destructans by winters’ end, declines in bat populations were limited. In contrast, early in the second winter, fungal prevalence among bats was already high and severe communitywide declines occurred over the next 4 months. The earlier timing of exposure in the second year would be expected to increase the effects of WNS because by winter’s end most bats would have been infected and in hibernation for at least 70–100 days (the approximate time between infection and death; 5). Few would be able to survive until spring, when bats cease hibernating and clear the fungus (7).

WNS continues to spread south, west, and north from New York, where it was first detected in 2006, and continues to cause widespread bat population declines. Potential control strategies include development of probiotic treatments (14) and alteration of hibernacula microclimates to make them cooler and drier (3,15). Our results suggest that if P. destructans invasion in other sites is similar to what we documented in Illinois, interventions must be implemented proactively, or quickly after P. destructans invasion, to prevent collapse of bat communities. Reduced bat populations will probably have a negative effect on humans because bats play a useful role in ecosystems by consuming disease vectors and many forest and agricultural insect pests.

Financial support was provided by the National Science Foundation (grants DGE-0741448, DEB-1115895, DEB-1336290, and EF-0914866), Bat Conservation International, and National Geographic. All work was performed under protocol FrickW1106 and approved by the University of California, Santa Cruz, Institutional Animal Care and Use Committee.