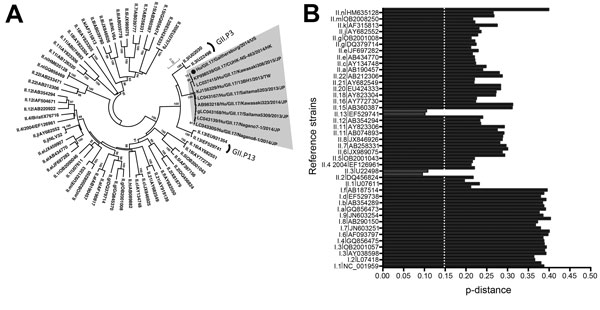 Figure 2. Relationship of the RNA-dependent RNA polymerase (RdRp) region of norovirus strain Hu/GII.17/Gaithersburg/2014/US to that of other noroviruses. A) Phylogenetic tree of the RdRp region (nt 4526–5116) from novel GII.17 strains (cluster C) and reference strains from each genotype described (6). Phylogenetic analyses were conducted by using MEGA version 6 (11), neighbor-joining as the algorithm for reconstruction, and Tamura-Nei as the model of substitution. Bootstrap (500 replicates) analysis was used for the statistical support of the tree. Gray shading indicates GII.17 cluster C strains, and Hu/GII.17/Gaithersburg/2014/US is indicated by a black circle. Strains from genotypes GII.P3 and GII.P13 are indicated by brackets. B) Distances (p-distances) among the Hu/GII.17/Gaithersburg/2014/US strain and reference strains. Values compared with reference strains from genotypes GII.P3 and GII.P13 are shaded. Values considered cut off for genotype designation are indicated with a dotted line (6,12).