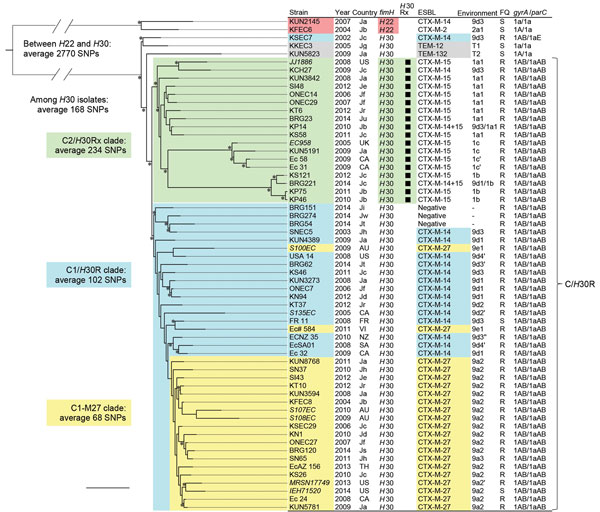 Figure 1. Core genome single-nucleotide polymorphism (SNP)–based phylogenetic tree of Escherichia coli sequence type (ST) 131 isolates. This maximum-likelihood phylogram is based on a 4,086,650-bp core genome and a total of 5,280 SNPs. The tree is rooted by using the outgroup H22 isolates, and asterisks indicate bootstrap support >90% from 100 replicates. Strains that had previously been sequenced are in bold. The Country columns indicate places of isolation: Ja to Jw, Japan (a to w indicates hospitals); AU, Australia; CA Canada; FR, France; NZ, New Zealand; SA, South Africa; TH, Thailand; UK, United Kingdom; US, United States; VI, Vietnam. Environment column shows a type of genetic environment of ESBL genes (Technical Appendix Table 2). FQ columns indicate ciprofloxacin susceptibilities (S, susceptible; R, resistant). KSEC7 had a parC 1aE allele including G250A (S80K) mutation in addition to a 1a allele. The ciprofloxacin-resistant C/H30R cluster comprised the C2/H30Rx and C1/H30R clades. All of the H30Rx isolates belonged to the C2/H30Rx clade. The C1/H30R clade included CTX-M-14–producing H30R, non–ESBL-producing H30R, and CTX-M-27–producing H30R isolates. CTX-M-27–producing isolates belonged to the C1-M27 clade within the C1/H30R clade except 2 isolates (S100EC and EC# 584). The bootstrap value for the root of the C1-M27 clade was 64%. An average of 68 SNPs was found among the C1-M27 clade, whereas an average of 158 SNPs was found between the C1-M27 clade and 2 non–C1-M27 clade isolates with blaCTX-M-27. Scale bar indicates 100 SNPs.

Page created: October 18, 2016
Page updated: October 18, 2016
Page reviewed: October 18, 2016
The conclusions, findings, and opinions expressed by authors contributing to this journal do not necessarily reflect the official position of the U.S. Department of Health and Human Services, the Public Health Service, the Centers for Disease Control and Prevention, or the authors' affiliated institutions. Use of trade names is for identification only and does not imply endorsement by any of the groups named above.