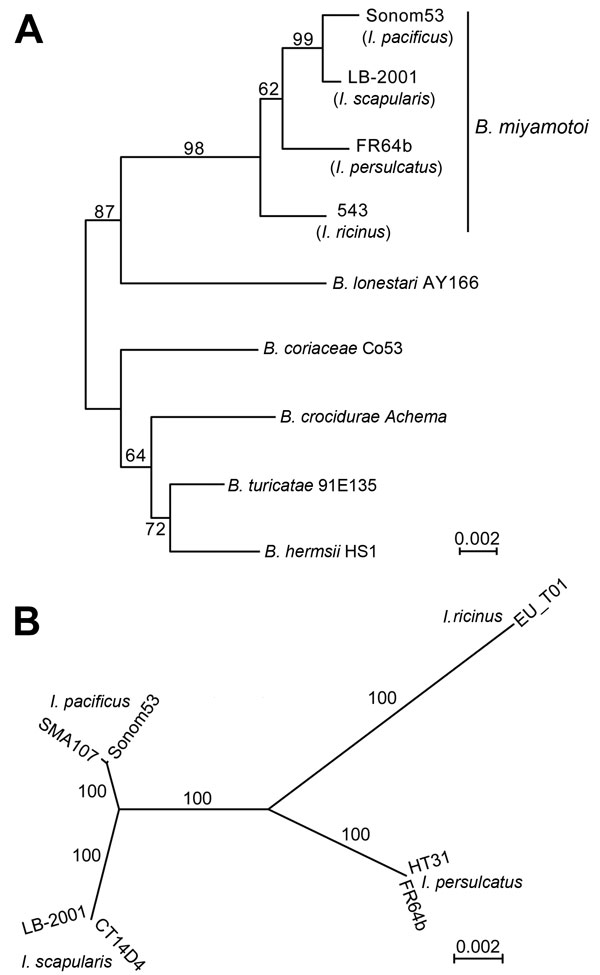 Figure. Phylograms of 16S ribosomal RNA sequences (A) and of multilocus sequence typing (MLST) genes (B) of Borrelia miyamotoi strains from Ixodes ticks collected in California, USA, and selected other Borrelia species. A) Rooted neighbor-joining distance phylogram of observed differences. Percentage support for clades was evaluated by 1,000 bootstrap replications, and values are indicated along branches. The GenBank accession number for the partial 16S ribosomal RNA gene of Sonom53 is KU196080. GenBank accession numbers for 16S ribosomal RNA genes of other B. miyamotoi strains are NR_121757 (LB-2001), and KJ847049 (543), and AY604976 (FR64b). GenBank accession numbers for corresponding sequences of designated strains of other species are AY166715 for B. lonestari and, for the 4 species constituting the outgroup, AF210134 for B. coriaceae, GU350713 for B. crocidurae, NR_102958 for B. turicatae, and NR_102957 for B. hermsii. The tick species sources of the B. miyamotoi organisms are indicated. B) Unrooted maximum-likelihood phylogram for 8 concatenated, codon-aligned MLST genes. The model of nucleotide substitution was HKY85 and the empirically estimated γ shape parameter was 0.01. Percentage support for clades was evaluated by 100 bootstrap replications by using full-heuristic search, and values are indicated along branches. GenBank accession numbers for Sonom53 partial sequences of clpA, clpX, nifS, pepX, pyrG, recG, rplB, and uvrA genes are KU23498–KU234405. The partial sequence of SMA107 pyrG is KU307254. The corresponding sequences for FR64b, LB-2001, and CT14D4 were obtained from the complete chromosomes (GenBank accession nos. CP004217, CP006647, and CP010308, respectively). The MLST sequences for strains EU-T01 and HT31 were obtained from the Borrelia MLST Database (http://pubmlst.org/borrelia/), where they have identification numbers of 1279 and 1275, respectively. Scale bar indicates nucleotide substitutions per site.