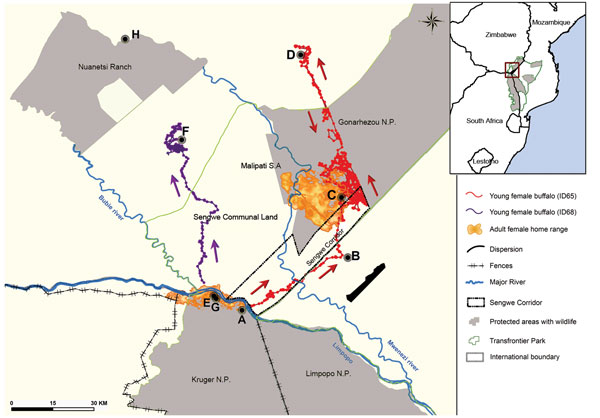 Figure 1. Study area encompassing part of Mozambique, South Africa, and Zimbabwe. Inset map shows location of the Great Limpopo Transfrontier Conservation Area within southern Africa. Orange/yellow shaded areas represent the home ranges of 5 satellite collar–equipped adult female African buffaloes, representative of the 5 herds followed for the study in Kruger National Park (NP) (n = 3) and Gonarezhou NP (n = 2). Because of overlap among the herds, boundaries for the 5 herds cannot be seen. Data for the other adult female buffalo in the study are not represented. The home range of Kruger NP herds span the Limpopo River between South Africa and Zimbabwe. Long-distance movements of 3 subadult female buffalo are shown. Arrows indicate the direction of movements for 2 buffalo; points of capture and resighting are shown for the third buffalo. 1) Red path: a 2.5-year-old female buffalo (ID65) collared at point A in South Africa in October 2013 walked a maximum direct distance of 95 km during January 6–12, 2014. She crossed into Zimbabwe, then into Mozambique (point B), and again into Zimbabwe, where she entered Gonarezhou NP, the home range of a buffalo herd collared during 2008–2010 (point C). She was visually sighted by plane on January 23, 2014, within a 70-strong mixed buffalo herd in the southern part of Gonarezhou NP (H. van der Westhuizen, pers. comm.). On March 14, she left the Gonarezhou NP and entered the Gonakudzingwa cattle commercial ranch area (point D) before coming back into Gonarezhou NP. Inside the park, this buffalo followed a straight line (representing the railway line that crosses the park) and entered Mozambique. 2) Purple path: a 4-year-old young female buffalo (ID68) collared in October 2013 at point E (initially captured but not equipped in July 2011 at age 20 months) walked a direct distance of 64 km. She crossed the Limpopo River on February 26 and, in 8 days, joined the northern tip of the path where a small buffalo herd is thought to range (point F). 3) Path not shown: a 4.5-year-old female, captured at point G in June 2010 at age 24 months, was resighted in March 2013 in an area deep into communal land at a direct distance of 96 km (point H) from capture site. This buffalo was identified on the basis of ear-tag color and number, sex, and estimated age (B. Lessmay, pers. comm.). Movements of all 3 buffalo end outside the Transfrontier Conservation Area (in green).