Effects of Response to 2014–2015 Ebola Outbreak on Deaths from Malaria, HIV/AIDS, and Tuberculosis, West Africa 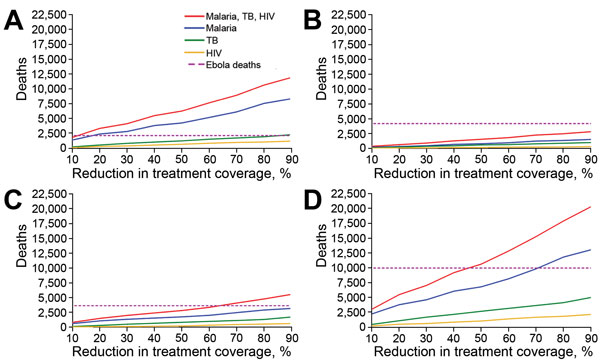 Figure 2. Sensitivity analysis of model outcomes to variation in treatment coverage during response to the 2014–2015 Ebola outbreak in West Africa. A) Guinea, B) Liberia, C) Sierra Leone, and D) all 3 countries. Treatment coverage of malaria, HIV/AIDS, and tuberculosis varied from 10% to 90% reduction compared with the coverage before the Ebola outbreak. Average additional attributable deaths from malaria, HIV/AIDS, and tuberculosis as well as total direct deaths from Ebola are shown. Estimates of additional attributable deaths were associated with considerable uncertainty and are not shown here.

1These joint first authors contributed equally to this article.