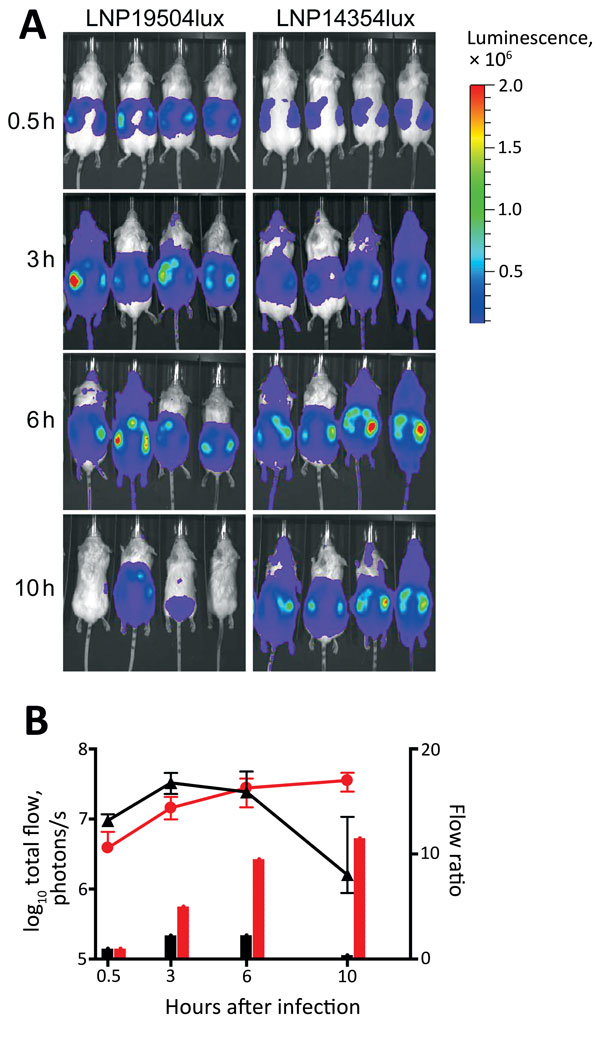 Figure 2. Dynamic imaging showing the multiplication and spread of Neisseria meningitidis in BALB/c transgenic mice expressing the human transferrin. A) Dorsal views of 8 mice (4/group) analyzed for bioluminescence at intervals after infection, as shown on left. Mice were infected by intraperitoneal injection of 5 × 106 CFU of N. meningitidis strain LNP19504lux (derived from an isolate from France) or LNP14354lux (derived from an isolate from Africa). Both strains expressed the luciferase (lux) operon. Photographs are overlaid with color representations of luminescence intensity, measured in total photons per second and indicated on the scales: red, most intense (2.00 × 106 p/s/cm2/steradian); blue, least intense (1.00 × 104 p/s/cm2/steradian). B) Luminescence for LNP19504lux (black) and LNP14354lux (red) was quantified and expressed by using GraphPad PRISM version 4.00 (http://www.graphpad.com/). Means ± 95% CIs of total photons per second (lines, left y-axis) were calculated by defining the specific representative region of interest encompassing the entire animal. Signals differed significantly between the 2 groups after 10 h of infection (p = 0.01 by t-test). After 24 h, all mice had survived and signals declined for both isolates but remained detectable for LNP14354lux (not shown). The data are also expressed as flow ratio (total photons per second for each point/total photons at the first point [after 0.5 h of infection]) (bars, right y-axis).