Yellow fever is a reemerging, zoonotic, noncontagious viral hemorrhagic disease endemic to Africa and South America; outbreaks occasionally occur among human and nonhuman primates (1). It is caused by the yellow fever virus (family Flaviviridae, genus Flavivirus), which is carried by the vector mosquitoes Haemagogus and Sabethes (sylvatic cycle) and Aedes aegypti (urban cycle) (2).

Presumptive first reports of infection with yellow fever virus occurred ≈500 years ago (San Domingo, 1498; western Africa, 1585), and the first epidemics were recorded in the 17th century (Barbados, Cuba, and Mexico) (3–5). By the 18th century, epidemics were already deemed a threat for public health in the Old and New Worlds; transoceanic migrations played a major role in virus spread (3,6). After entering Brazil by the coast in the 17th century, the virus was gradually displaced to northwestern and midwestern areas. Since the 19th century, yellow fever outbreaks occurred in many cities in Brazil, until 1942, when the urban cycle was eradicated. By the late 1900s through the first decade of the 21st century, beginning in 1997, intense virus circulation extended from the Amazon region to the contiguous states of Goiás and Mato Grosso do Sul (central Brazil). During 2008–2009, a new outbreak was registered and the virus reached southern and southeast regions of the country (1). In 2017, an epizootic occurred in Espirito Santo state, Brazil, where yellow fever virus has not circulated in the past 50 years and human vaccination coverage is low. We performed diagnostics on a small cohort of New World nonhuman primates in this state. 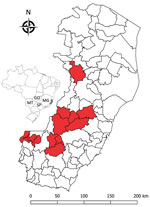 We observed classic histopathologic commonalities with yellow fever–associated disease in humans (midzonal lytic necrosis, apoptotic bodies, steatosis, and scarce paucicellular inflammation) (10,11). The severity and extent of these lesions probably accounted for severe hepatic failure and death of the animals. The knowledge of naturally occurring yellow fever–associated disease in NHPs gained since the early 1900s is fragmentary (12) and mainly limited to Alouatta spp. and Callithrix spp. NHPs (6,11). Alouatta spp. monkeys are very susceptible to yellow fever; fatal disease has supported a sentinel role for yellow fever virus circulation since the 1930s (11). Hepatic lesions of several NHP species, experimentally or naturally infected, are similar to those in humans (11). In this study, 1 animal had atypical liver histopathologic features, characterized by massive steatosis with rare midzonal to random single-cell necrosis/apoptosis. Additional liver findings were multifocal microabscesses, probably the result of acute bacterial ascending (intestinal) infection or concomitant septicemia; endothelial necrosis; and attempted hepatic regeneration as suggested by oval cell hyperplasia. The pathologic signature of yellow fever–associated disease in NHPs (≈150 species) is not fully resolved. Ongoing comparisons between yellow fever–associated disease in humans and NHPs may help elucidate convergent and divergent pathogenetic mechanisms and characterize typical and atypical features, thus delineating the pathologic signature in NHPs.

Before the advent of PCR, the method of choice for diagnosing yellow fever was IHC, which remains a highly reliable diagnostic tool (13), even in the presence of some autolysis (14). In our study and the ongoing outbreak, histopathologic analyses and IHC were vital for successful diagnosis, enabling detection of atypical presentation, paralleling the sensitivity and specificity of PCRs. In a public health context, IHC will greatly aid in yellow fever diagnosis when molecular analysis is not an option, as occurred for 11 of 22 cases in this study. Although RNA extraction from paraffin-embedded tissues is possible, it is not extensively applied and the degradation of RNA may lead to false-negative results.

During January–July 2017, yellow fever was diagnosed for 150 of 1,000 tested NHPs (15% occurrence) from southern states of Brazil. NHPs were effective yellow fever sentinels and enabled rapid government response (8,15). Although the Espirito Santo outbreak had damaging socioeconomic and environmental consequences, adequate case conduction and diagnosis may have prevented further human deaths and diminished disease expansion. In contrast, the effects of yellow fever virus spreading among NHPs in the Atlantic forest are expected to be devastating.

Dr. Fernandes is the leading veterinary pathologist responsible for yellow fever diagnosis in NHPs at the Adolfo Lutz Institute. Her research focuses on wildlife pathology and arbovirus disease mechanisms, specifically in comparative pathology of human and NHP yellow fever–associated disease, and seeks to characterize species-specific pathogenic mechanisms and factors modulating yellow fever–endemic cycles and triggering outbreaks among humans and NHPs in the Americas.

J.D.D. received a postdoctoral fellowship by the São Paulo Research Foundation (grant no. 2017/02223-8). He greatly appreciates the authorization to conduct this work under PR no. 05/2012.