Variegated Squirrel Bornavirus 1 in Squirrels, Germany and the Netherlands

We screened squirrels in Germany and the Netherlands for the novel zoonotic variegated squirrel bornavirus 1 (VSBV-1). The detection of VSBV-1 in 11 squirrels indicates a considerable risk for transmission to humans handling those animals. Therefore, squirrels in contact with humans should routinely be tested for VSBV-1.

The family Bornaviridae comprises the classical mammalian bornaviruses (Mammalian 1 bornavirus with borna disease virus; BoDV-1 and -2); avian bornaviruses (Passeriform 1/2 bornavirus, Psittaciform 1/2 bornavirus, Waterbird 1 bornavirus); and a recently described Elapid 1 bornavirus from snakes (Loveridge’s garter snake virus 1) (1). BoDV-1 and -2 are considered nonzoonotic (6–8). The bicolored white-toothed shrew (Crocidura leucodon) has been proposed as a reservoir species for BoDV-1 (2–5). In addition to the exogenous viruses, endogenous bornavirus-like genomic elements have been found within the genome of humans and several animal species, including the 13-lined ground squirrel (Spermophilus tridecemlineatus) (9,10).

In 2015, a novel zoonotic bornavirus, the variegated squirrel bornavirus 1 (VSBV-1; new species Mammalian 2 bornavirus), was discovered in tissue samples from the central nervous system (CNS) of 3 persons with encephalitis, which resulted in death (11). The patients were breeders of variegated squirrels (Sciurus variegatoides), and an almost identical bornavirus sequence was detected in 1 contact squirrel kept by one of the breeders. Phylogenetic analysis classified VSBV-1 as a unique member of a new species of the genus Bornavirus (11).

We identified more VSBV-1 infected squirrels in Germany and the Netherlands. We also describe reliable molecular and serologic methods for in vivo detection of zoonotic VSBV-1 and its phylogenetic characterization.

During 2015, samples were collected from 468 squirrels representing 14 species. Sampled squirrels were from varying locations: private holdings with up to 45 animals per holding, zoological gardens, or roadkill (Table 1). Locations represented 3 countries: Germany (399 samples from 28 holdings), the Netherlands (49 samples from 4 holdings), and the United Kingdom (20 samples from roadkill). Most live squirrels were sampled at the request of the owners. At least 1 swab sample and, if possible, duplicates of oral swab samples were collected from living animals, and brain samples were tested from dead squirrels. Blood samples (EDTA/heparin) were also available from 164 squirrels (Table 1). We obtained congruent results when we tested swabs and brain samples by 2 different VSBV-1–specific quantitative reverse transcription PCR (qRT-PCR) assays (11). Blood samples were centrifuged, and the resulting plasma was tested for the presence of viral RNA by using qRT-PCR and for bornavirus-specific IgG by using an indirect immunofluorescence assay (11).

Figure 1. Immunohistochemical detection of bornavirus X protein (A) and phosphoprotein (B) in hippocampal neurons of a brain of a Prevost’s squirrel (Callosciurus prevostii) collected in Germany in 2015. Viral antigen is shown...

All animals with detectable virus as well as 40 negative squirrels from the same holdings were euthanized and checked for macroscopic lesions. We applied hematoxylin and eosin staining to formalin-fixed, paraffin-embedded brain sections from 9 of 11 animals and performed immunohistochemistry as described previously (12). A BoDV-positive horse brain sample served as positive control. Histopathology showed that 5 of 9 VSBV-1–positive animals, variegated squirrels as well as Prevost’s squirrels, had mild nonsuppurative meningitis or encephalitis. In 8 of 9 animals, we also detected intranuclear eosinophilic Joest-Degen inclusion bodies in scattered neurons of brain, spinal cord, and trigeminal as well as spinal ganglia (data not shown). We observed bornavirus-specific phosphoprotein and X protein throughout the brain in neurons, glial cells, and in a few ependymal cells in nuclei, cytoplasm, and cellular processes (Figure 1). We tested a panel of organ samples from all euthanized animals by qRT-PCR. All animals for which swab samples were VSBV-1–positive harbored considerable VSBV-1 genome loads, whereas animals for which swab samples were negative for viral RNA were also negative for viral loads in all tested organs (Table 2; data for control animals not shown). We found the highest viral RNA loads in the CNS and organs (kidney, nose, bladder, salivary gland, and sex organs), which could play a role in viral shedding and transmission (Table 2). Skin sections were also positive, indicating that VSBV-1 has broad cell and organ tropism. We were able to cocultivate infected primary squirrel cells with a permanent cell line and to isolate infectious virus from these passaged cells.

We sequenced the VSBV-1 genome (8,786 nt; missing only the 5′ and 3′ noncoding regions) from all 11 squirrels and compared the sequences with the published VSBV-1 prototype sequence from a variegated squirrel (GenBank accession no. LN713680) (11). Accession numbers of the VSBV-1 sequences from this study are LT 594381–LT5943919 (European Nucleotide Archive). 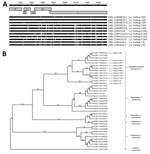 Figure 2. Analysis of 11 newly identified VSBV-1 genomes from squirrels collected in Germany and the Netherlands, 2015, in comparison with related bornaviruses. A) New sequences aligned with published squirrel-derived VSBV-1 genome (GenBank...

Genomes of viruses detected in squirrels from holding I showed the highest similarity with 1–6 nt substitutions, resulting in 1–3 aa changes, whereas the other sequences exhibited more variability. We found <29 nt substitutions causing <19 aa changes. The mutations were evenly distributed over the coding regions, but in viral genomes of squirrels from the same holding, they often occurred at the same position (Figure 2, panel A).

We aligned the 11 VSBV-1 sequences with those from other bornaviruses by using MAFFT (Multiple Alignment using Fast Fourier Transform), and we used the best-fit model TIM2+I+G4 to construct a phylogenetic tree (IQ-Tree version 1.3.10; http://iqtree.cibiv.univie.ac.at) with 1,000 bootstrap replicates. The novel VSBV-1 genomes clustered with the 2 human- and squirrel-derived prototype sequences LN 713680 and LN71368, forming a unique VSBV-1 clade separate from other mammal, avian, and snake bornaviruses (sequence identity <69%; Figure 2, panel B).

We screened 468 squirrels and identified 11 VSBV-1–positive animals, including squirrels belonging to 2 subfamilies of the family Sciuridae. Although the VSBV-1–positive squirrels originated from different holdings and belonged to different subfamilies, the viral genome sequences formed a distinct VSBV-1 cluster. Whole-genome analyses provided no evidence for specific mutation patterns with regard to zoonotic potential or species-specific adaptations.

None of the VSBV-1-positive animals showed clinical signs of infection. Highest viral genome loads were found in the CNS, followed by the oral cavity and skin, indicating the potential for transmission to humans through scratching or biting. Only those squirrels positive for VSBV-1 by qRT-PCR displayed bornavirus-specific antibodies. Although serologic analyses support the qRT-PCR results, collecting serum samples is difficult and often not feasible for private breeders. Our data suggest that screening of swab samples is a suitable and reliable tool for noninvasive monitoring of squirrels for VSBV-1 infection. The prevalence of 3.3% for S. variegatoides and 8.8% for C. prevostii squirrels indicates a considerable risk for transmission to humans handling those animals without taking precautionary measures. We therefore recommend routine testing of squirrels in contact with humans, such as those in breeding and holding facilities or zoological gardens, at least from the subfamilies Sciurinae and Callosciurinae.

Ms. Schlottau is a biologist working on her PhD thesis at the Institute of Diagnostic Virology, Friedrich-Loeffler-Institut, Insel Riems, Germany. Her research interests include diagnostics of viruses of the Order Mononegavirales and the genetic characterization of lyssaviruses and bornaviruses.

The study was funded in part by the EU Horizon 2020 program (European Commission Grant agreement no. 643476 “COMPARE”) and contract-research-project MetaInfRisk for the Bundeswehr Medical Service E/U2AD/CF512/DF557. PCR development and screening was also supported by the Friedrich-Loeffler-Institut research network “Lyssavirus—a potential public health risk.”

Variegated Squirrel Bornavirus 1 in Squirrels, Germany and the Netherlands