Powassan virus (POWV) lineage II is an emerging tickborne flavivirus with an unknown seroprevalence in humans. In a Lyme disease–endemic area, we examined the seroreactivity to POWV in 2 patient cohorts and described the clinical features of the POWV-seroreactive patients. POWV disease might be less neuroinvasive than previously thought.

Powassan virus (POWV) lineage II, also known as deer tick virus, is an emerging tickborne flavivirus (1) transmitted by Ixodes scapularis ticks, which are also the primary vector for Borrelia burgdorferi (Lyme disease pathogen). In POWV-endemic regions, up to 7% of ticks carry the virus, and seroprevalence among small mammalian hosts can exceed 90% (2,3). Because the territory of I. scapularis is expanding and the prevalence of POWV in ticks and mammals is increasing, POWV poses an increasing threat (2–5). The seroprevalence of POWV in humans in some regions of North America is known (range 0.5%–3.3%), but because the geographic distribution is quite extensive, the seroprevalence of most at-risk populations is uncertain (6).

POWV is typically detected with an IgM antibody capture ELISA or an IgM immunofluorescence antibody (IFA) assay. Cases are confirmed by >90% or >50% plaque reduction neutralization test (PRNT90 or PRNT50), detection of virus-specific nucleic acids, isolation in culture, or a >4-fold increase in antibody titers from paired acute and convalescent sera (7–9). Using these assays, investigators have identified ≈100 cases of POWV encephalitis; however, the actual incidence is likely higher (1,6). Although nonneuroinvasive disease has been described for other arboviral illnesses, our knowledge of POWV has been limited to patients with neuroinvasive disease (1,8,10,11). In this study, we evaluated the seroreactivity for POWV in US Midwest patients, many of whom did not have neuroinvasive disease.

We selected patients with suspected tickborne disease (TBD; n = 95) and patients undergoing routine chemical screening (n = 50) who sought treatment during July–August 2015 at the Marshfield Clinic in northern Wisconsin, a TBD-endemic area. Patients were considered to have suspected TBD if a serologic test for B. burgdorferi was ordered. The chemical screening cohort included patients who had a complete metabolic or lipid panel ordered as part of their clinical care. We evaluated POWV seroreactivity of specimens from these patient cohorts and, of the patients with serologic evidence of POWV infection and available clinical data, described the clinical features of their disease. All human subject research protocols were approved by the Marshfield Clinic Research Institute Institutional Review Board. 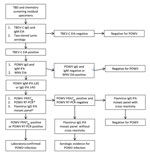 Clinical data were available for 51 (53.7%) TBD patients and 50 (100%) patients tested by chemical screening with routine chemistry screening completed. For those with clinical data available, we classified their cases as probable or confirmed by using the Centers for Disease Control and Prevention case definitions (7). We performed statistical analysis with SAS 9.3 (SAS Institute, Inc., Cary NC, USA) and compared categorical variables by using Fisher exact tests. Significance was defined as p<0.05.

Serologic evidence of POWV infection was present in 9 (9.5%) TBD patients and 2 (4.0%) patients with routine chemistry screening completed (p = 0.33) (Table 1). POWV infection was confirmed in 3 (3.2%) TBD patients (2 by PRNT90 [titer range 1:160–1:320] and 1 by reverse transcription PCR) and 0 chemical screening patients (p = 0.55). Of the 3 patients with confirmed POWV infection, evidence of acute infection (IgM positivity) was found in 2 (2.7%). Patients positive only for IgM by IFA assay did not have PRNT90 titers, which was expected because neutralizing antibodies are often not present during early infection (12). The 2 patients with routine chemistry screening completed who were positive for POWV IgG failed to show neutralization by PRNT; however, rather than PRNT50, we used POWV PRNT90, which has greater specificity but lower sensitivity. In addition, our PRNT was based on POWV lineage I; thus, our test was potentially less sensitive at detecting POWV lineage II–specific antibodies and thus less capable of detecting previous POWV lineage II infection.

Similar to other flavivirus serologic assays, considerable cross-reactivity occurred with the Flavivirus Mosaic IgG IFA assay (Technical Appendix Table) (13). The fluorescence intensity was stronger for TBEV than it was for other flaviviruses in all TBD patients except for 1 patient with prior confirmed WNV infection. Both patients with routine chemistry screening completed who were POWV IgG–positive were TBEV IgM–positive. Neither had a history of yellow fever or dengue virus exposure or vaccination, although the panel showed cross-reactivity with these viruses.

B. burgdorferi IgM was detected in 6 (85.7%) of the 7 patients with serologic evidence of acute POWV infection, suggesting concurrent infection, which is consistent with surveillance data indicating that POWV and B. burgdorferi co-infect I. scapularis ticks (2,3). The rate of concurrent antibodies we report is higher than that described for regions of Europe endemic for TBE and Lyme disease (14).

Clinical data were available for 7 of the patients with serologic evidence of POWV infection (Table 2). Infection probably occurred in 3 patients. A laboratory-confirmed nonacute infection was found in a patient (patient no. 2) who did not meet Centers for Disease Control and Prevention criteria. Patient symptoms could not be attributed specifically to POWV because all TBD patients with clinical data available were positive for B. burgdorferi antibodies, and testing for the possibility of infection with additional endemic tick pathogens was performed for only 2 patients.

Consistent with previous studies showing increased susceptibility of children to arboviral diseases, 3 patients who might have had POWV infection were children (Table 2) (15). Fever was present in all patients with evidence of POWV acute infection; other common symptoms were fatigue, malaise, fussiness, listlessness, and headache. Complete blood cell count and C-reactive protein did not indicate severe infection. Consistent with other arboviral diseases, urticarial or maculopapular rash was documented in 3 patients (15). No patients had neuroinvasive disease.

This study had limitations. Similar to other serologic studies, cross-reactivity and prior exposure to POWV cannot be completely excluded in serologically positive cases. Analysis for other flaviviruses, prior yellow fever virus vaccination, and history of travel to dengue-endemic regions, as well as PRNT, were completed to address this concern. The study population was limited to persons in the US upper Midwest, although POWV is likely an increasing problem throughout the territory I. scapularis ticks occupy. Our study results might not be applicable to these other regions.

In a Lyme disease–endemic area, POWV seroreactivity and confirmed POWV infection were present. The spectrum of disease is broader than previously realized, with most patients having minimally symptomatic infection (1,10,11). Further studies are needed to characterize clinical disease of POWV monoinfection, document POWV seroprevalence in humans, and monitor epidemiologic trends.

Dr. Frost is a pediatrician and physician scientist at Marshfield Clinic in Minocqua, Wisconsin. Her research interests include tickborne pathogens, blastomycosis, and antimicrobial stewardship.

We thank Marshfield Clinic Research Foundation staff for supporting this study and Marshfield Labs staff for collecting specimens. We also thank Diep Johnson for assisting with this study.