We report a case of meningitis in a neonate in China, which was caused by a novel multidrug-resistant Cronobacter sakazakii strain, sequence type 256, capsular profile K1:CA1. We identified genetic factors associated with bacterial pathogenicity and antimicrobial drug resistance in the genome and plasmids. Enhanced surveillance of this organism is warranted.

On September 29, 2015, a 26-day-old boy, who was born after 38 weeks’ gestation and had abdominal distention, fever, and jaundice, was hospitalized in a children’s hospital in Guangzhou, China. He was fed breast milk; however, it could not be determined whether he had been exclusively breast-fed or whether the breast milk had been expressed by use of a pump. His cerebrospinal fluid contained numerous leukocytes, and his cerebrum contained abscesses. After a series of symptomatic treatments, including initial intravenous ceftazidime followed by meropenem, his clinical signs gradually improved. However, when discharged from the hospital after 3 weeks, his mental and physical development were remarkably impaired.

Cronobacter, isolated from brain abscess fluid, was identified by using an automated VITEK 2 Compact system (bioMérieux, Marcy l’Etoile, France). An isolate, GZcsf-1, was determined to be C. sakazakii ST256 with serotype O1. The Cronobacter PubMLST (https://pubmlst.org/cronobacter/) contains 2 ST256 isolates: MOD1-Ls15 g, isolated from the alimentary canal of the green bottle fly, Lucilia sericata, in the United States; and 2061 (no source information), detected in France. This ST had not been reported to cause meningitis in neonates. Susceptibility to 15 antimicrobials was tested by using the broth dilution method; MICs are shown in the Technical Appendix. GZcsf-1 was resistant to 8 antimicrobials: ampicillin, cefazolin, ceftriaxone, aztreonam, gentamicin, tetracycline, chloramphenicol, and trimethoprim/sulfamethoxazole.

We identified mobile elements and different types of secretion systems by using VRprofile (http://202.120.12.134/STEP/STEP_VR.html) (Technical Appendix). Although virulence genes in C. sakazakii have not yet been clarified, T4SS, T6SS, and prophages may contribute to the pathogenicity of GZcsf-1. More importantly, full-plasmid comparison by blastn (http://blast.ncbi.nlm.nih.gov/Blast.cgi) revealed pGW2 to be closely related to IncFIB-type plasmid pESA3, which has been widely identified as a virulence plasmid in pathogenic strains of C. sakazakii (8).

We identified drug-resistance genes by using ResFinder 2.1 (https://cge.cbs.dtu.dk/services/ResFinder-2.1/). Except for 2 drug-resistance genes in the genome, 19 were integrated in pGW1, indicating that the MDR phenotype of C. sakazakii GZcsf-1 resulted from plasmid-mediated resistance (Technical Appendix). By performing plasmid multilocus sequence typing (https://pubmlst.org/bigsdb?db=pubmlst_plasmid_seqdef&page=sequenceQuery), we determined that pGW1 is IncHI2-ST1 and is mainly found in other countries (9). Full-plasmid comparison revealed that pGW1 is closely related to p505108-MDR (5). 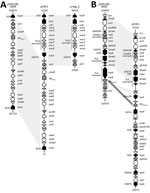 Figure. Analysis of resistance plasmid pGW1 in Cronobacter sakazakii sequence type 256, isolated from neonate with meningitis, China, 2015, showing genetic organization of major drug-resistance determinants in pGW1, along with its structural...

The drug-resistance gene blaDHA-1, encoding an AmpC β-lactamase and conferring cephalosporin resistance, was found in pGW1 (Figure, panel A). According to a previous report, this gene is associated with ISCR1 (10). The difference between the 2 plasmids pGW1and p505108-MDR was in the insertion of a 7-kb fragment, associated with mercury resistance, between sul1 and IS26 in pGW1 (Figure, panel A). This fragment was also detected in plasmid unitig_2, implying that there might be a transposition or homologous recombination. Of 19 drug-resistance genes, 9 (47.4%) were integrated in the MDR region of pGW1 (Figure, panel B). The fragment from Tn3 remnant to mrr gene in pGW1 was identical to that in p505108-MDR. Compared with the Tn2 remnant in p505108-MDR, only blaTEM-1B in reverse orientation was conserved in pGW1. We found 5 new drug-resistance genes in pGW1—mph(A), sul1, aadA2, dfrA12, and aac(3)-IId—adjacent to IS26, IS5075, and ISCfr1, constituting new accessory modules. Mobilization of these accessory resistance modules into plasmid backbones may be promoted by transposition and homologous recombination.

Dr. Zeng is an assistant professor at Guangdong Institute of Microbiology, Guangzhou, Guangdong Province, China. Her research is focused on adaptive evolution, drug resistance, and pathogenesis of Cronobacter.