We used the nationwide Medical Expenditure Panel Survey (MEPS) to acquire data about race/ethnicity and outpatient antimicrobial drug use for 2014–2015, the latest years with data available. MEPS contains data on members of a nationally representative sample of households (5,6). A person’s race/ethnicity is reported by the respondent and imputed in <0.1% of cases. Information about race and Hispanic ethnicity are collected in separate questions. Data regarding prescriptions filled at outpatient pharmacies are collected from the respondent and, if the respondent approves, verified with the filling pharmacy. Data are afterward cross-referenced and cleaned by survey preparers (5).

We used 2 exposure variables. The first was a categorical race/ethnicity variable with 5 values: Hispanic, non-Hispanic white only, non-Hispanic black only, non-Hispanic Asian only, and non-Hispanic other or multiple race. The second exposure variable was dichotomous and indicated whether white was the race or 1 of the races of the respondent. This exposure variable included all persons from the non-Hispanic white category, some from the Hispanic category, and some from the other or multiple race category. The main outcome was reported outpatient antimicrobial drug prescription fills per 1,000 persons per year stratified by major antimicrobial drug class (penicillins, macrolides, quinolones, sulfonamides, other). The complex survey design was accounted for when computing rates and CIs with survey package version 3.32 in R version 3.4.1 (Technical Appendix). 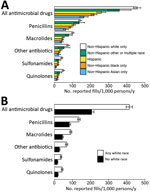 Figure. Annual antimicrobial drug use reported by Medical Expenditure Panel Survey respondents, by race/ethnicity, United States, 2014–2015. Error bars indicate 95% CIs. A) Drug use by race/ethnicity category. B) Drug use among...

S.W.O. was supported by cooperative agreement U54GM088558 from the National Institute of General Medical Sciences.