Tuberculosis (TB) is an infectious disease caused by Mycobacterium tuberculosis, which typically affects the lungs but can affect other sites. In 2016, an estimated 10.4 million new TB cases and 1.6 million TB-related deaths were documented worldwide (1). The Russian Federation reported >120,000 TB cases and ≈13,700 TB deaths in 2016 (1). TB strains with multidrug resistance (MDR TB), characterized by resistance to isoniazid or rifampin, are common in the Russian Federation. The estimated rate of MDR TB was 27% among TB case-patients newly diagnosed in 2016 and 65% among previously treated case-patients in 2016 (1). Most TB cases are associated with pulmonary localization of the disease; however, in some cases, extrapulmonary TB develops. In Russia, the rate of extrapulmonary TB cases among new TB cases was 3.3% in 2014; most extrapulmonary TB cases are osteoarticular and genitourinary (2). Approximately 70% of osteoarticular TB cases are tuberculous spondylitis (TBS), which cause severe specific lesions of >1 components of the spine (2). We report whole-genome sequencing (WGS) and variant analyses of M. tuberculosis isolates from patients treated in Russia for TBS during 2007–2014.

Figure 1. Distribution of Mycobacterium tuberculosis isolates randomly collected from 71 patients with tuberculous spondylitis who received treatment at clinics of Research Institute of Phthisiopulmonology in 32 regions of the the Russian Federation, 2007–2014

The isolates were randomly collected from 71 TBS patients who received treatment at clinics of the Research Institute of Phthisiopulmonology in 32 regions of the Russian Federation (Figure 1). In these cases, M. tuberculosis isolates were cultured from extrapulmonary clinical material and stored. We assessed the susceptibility of these stored isolates to streptomycin, isoniazid, rifampin, ethambutol, pyrazinamide, ethionamide, ofloxacin, kanamycin, amikacin, cycloserine, capreomycin, and paraaminosalicylic acid according to World Health Organization recommendations (3). We isolated genomic DNA from cultured bacteria by using phenol/chloroform extraction and subjected bacterial DNA to WGS by using the MiSeq platform (Illumina, San Diego, CA, USA) to a mean coverage of 47× (range 18×–170×), covering ≥99% of the M. tuberculosis H37Rv reference genome (GenBank accession no. NC_000962.3). We deposited WGS reads in the NCBI Sequence Read Archive (accession no. PRJNA352769).

We aligned sequenced reads to the reference genome and called variants (single-nucleotide polymorphisms [SNPs] and short insertions/deletions) by using bioinformatics software: bowtie2 (http://bowtie-bio.sourceforge.net/bowtie2/index.shtml); SAMtools (http://samtools.sourceforge.net); VCFtools (http://vcftools.sourceforge.net); and FreeBayes (https://github.com/ekg/freebayes). We used mutations that had q-scores ≥20 for comprehensive analysis. We used concatenated SNPs for phylogenetic analysis by using the GTRCAT (general time-reversible model with rate heterogeneity accommodated by using discrete rate categories) maximum-likelihood algorithm from the RAxML software package (4) to calculate an approximation model and 100 bootstrap replications. To avoid misalignments, we annotated SNPs in repetitive genome regions and in genes encoding proteins that contain proline-glutamate or proline-proline-glutamate motifs and filtered them from analysis. We used PhyTB (5) and SpoTyping tools (6) for phylogenetic classification of M. tuberculosis genomes and verified SpoTyping output by using previously conducted conventional spoligotyping analysis for 20 isolates that were previously described (7). 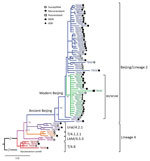 We identified 2 principal phylogenetic lineages among M. tuberculosis isolates, lineage 2 and lineage 4; further, we detected evolutionary ancient and modern sublineages within major lineage 2 (Beijing; Figure 2) according to previously described classifications (8). The largest subgroup within the Beijing clade belonged to the B0/W148 clonal cluster (Figure 2) (8). Lineage 4 was represented by 4 genetic families: Ural, 4.2; Latin-American/Mediterranean (LAM),(4.3); and T, 4.1 and 4.8. The 58 Beijing genotype isolates contained 38 MDR (65.5%) 5 extensively drug-resistant (XDR; resistant to isoniazid and rifampin plus any fluoroquinolone and >1 of 3 injectable second-line drugs) (8.6%), 7 polyresistant but not MDR (12%), 1 monoresistant (1.9%), and 7 susceptible (12%) TB isolates. The MDR TB frequency in the Beijing group (65.5%), was higher than that for other genetic groups pooled (p<0.0096 by Fisher exact test). The M. tuberculosis Beijing B0/W148 cluster was represented by 1 susceptible (4.8%), 2 polyresistant (9.5%), 3 XDR (14.3%), and 15 MDR (71.4%) TB isolates. The B0/W148 genetic group demonstrates an association with MDR TB (p = 0.03), shown previously (9,10). The other genetic groups (T, LAM, and Ural) included too few isolates to test for association with MDR TB.

Our analysis for small insertions and deletions detected 15 and 9, respectively, among the Beijing group (Technical Appendix Table 2). A deletion in kdpD and an insertion in Rv1258c were previously described (12,13). The other 22 mutations are novel: 18 were specific to the Beijing group; 2 to the modern Beijing group; 1 to the ancient Beijing group; and 3 to the B0/W148 group. We identified most mutations in genes encoding membrane-associated proteins, although several mutations were in regulatory genes, genes involved in cell metabolism, probable transposase genes, and genes with unknown function.

One insertion and 2 deletions were significantly associated with B0/W148 genetic group in kdpD, mmr and Rv1995 (p = 2.5 × 10−17) genes. Merker et al. (12), who proposed a pathogenic influence for B0/W148 strains, described a frameshift deletion in kdpD among Beijing B0/W148 strains. Deletion in the kdpD gene can lead to the formation of nonfunctional proteins KdpD and KdpE. Parish et al. showed that M. tuberculosis lacking KdpD and KdpE function express increased virulence in a mouse model of infection (14), which supports that the kdpD deletion detected in our study may influence Beijing B0/W148 strain’s rapid expansion and virulence. A mutation in the promoter region of the mmr gene (Rv3065), encoding multidrug-transport integral membrane protein, might contribute to drug resistance in Beijing B0/W148 strains. Sriraman et al. recently showed that mmr is upregulated in rifampin-resistant and MDR TB strains, even in the presence of target gene mutations (15). Insertion in Rv1258c is common to all Beijing strains except ancient TB0010. In their study, Villellas et al. found the cytosine nucleotide insertion between positions 580 and 581 in the Rv1258c gene in all Beijing isolates among streptomycin-resistant M. tuberculosis strains (13).

In conclusion, we examined the phylogenetic and drug-resistance properties of M. tuberculosis isolates collected from 71 TBS patients in 32 locales across Russia. Our analyses confirmed the phylogenetic separation of pathogenic M. tuberculosis strains and support the prevalence of Beijing strains showing high levels of multidrug resistance among TBS isolates. Further, we found known SNP variants that had high concordance with suggested drug resistance. Finally, novel insertions/deletions were apparent, which we suggest are candidates for conferring drug resistance pending independent replication studies. Our analysis of WGS data identified known and novel genetic determinants that could or do influence bacterial virulence, pathogenicity, and drug resistance.