Israel implemented use of 7- and 13-valent pneumococcal vaccine in 2009 and 2010, respectively. We describe results of prospective, population-based, nationwide active surveillance of Streptococcus pneumoniae serotype 12F (Sp12F) invasive pneumococcal disease (IPD) dynamics in the 7 years after vaccine introduction. Of 4,573 IPD episodes during July 2009–June 2016, a total of 434 (9.5%) were caused by Sp12F. Sp12F IPD rates (cases/100,000 population) increased in children <5 years of age, from 1.44 in 2009–2010 to >3.9 since 2011–2012, followed by an increase in all ages. During 2011–2016, Sp12F was the most prevalent IPD serotype. Sp12F isolates were mostly penicillin nonsusceptible (MIC >0.06 µg/mL; MIC50 = 0.12) and predominantly of sequence type 3774), a clone exclusively found in Israel (constituting ≈90% of isolates in 2000–2009). The sharp increase, long duration, and predominance of Sp12F IPD after vaccine implementation reflect a single clone expansion and may represent more than a transient outbreak.

Streptococcus pneumoniae is a leading cause of illness and death worldwide; the highest incidence occurrs in children <2 years of age and in the elderly (1–5). For this reason, pneumococcal diseases are a target for global immunization programs in children and adults (1,6,7). Most reported cases of invasive pneumococcal disease (IPD) are sporadic, and outbreaks occur infrequently (5). Reported outbreaks have been of limited epidemiologic significance and associated with specific serotypes, including Streptococcus pneumoniae serotype 12F (Sp12F) (5,8,9).

Since the introduction of pneumococcal conjugated vaccine (PCV), a substantial increase in nasopharyngeal carriage of nonvaccine serotypes (NVT) has been observed in surveillance studies (10–14) and randomized trials assessing the effect of PCV on NVT carriage, comparing vaccinated children and unvaccinated controls (10). This increase in NVT carriage, commonly referred to as the replacement phenomenon, was accompanied by an increase in rates of IPD caused by NVT, diminishing the overall impact of PCVs on IPD rates (10,11).

In Israel, the 7-valent PCV (PCV7) was introduced to the national immunization plan (NIP) in July 2009, with a catch-up plan for children <2 years of age, and was gradually replaced with the 13-valent PCV (PCV13) in November 2010, without further catch-up. Uptake rates were high (>90%) (14). PCV7/PCV13 sequential introduction was followed by a substantial decline in overall IPD incidence among all age groups, driven mainly by the near-elimination of vaccine serotype disease, but accompanied by a substantial increase in IPD caused by non-PCV13 serotypes (15,16).

Sp12F is a nonvaccine serotype that is uncommonly carried in healthy persons (12,13,17). Sp12F was relatively rare in Israel among IPD cases in the pre-PCV era but has increased noticeably following PCV introduction (15). This serotype has been associated with outbreaks of community-acquired pneumonia and IPD in the United States (17–20) and Canada (8,21). Globally, most reported Sp12F isolates were of sequence type (ST) lineages ST989 and ST218 (17,18,22,23). An outbreak clone in Canada has been reported to have acquired resistance to macrolides and fluoroquinolones, replacing susceptible clones (21), but in general Sp12F is penicillin susceptible.

We assessed the dynamics of Sp12F IPD rates after sequential introduction of PCV7/PCV13 in Israel. Additionally, we investigated the molecular and antimicrobial drug susceptibility characteristics of these serotype isolates before and after vaccine introduction.

Our data derive from ongoing nationwide, prospective, population-based, active surveillance on IPD in children and adults in Israel (15,16). This report concentrates on data collected during the 7 years that followed PCV introduction in Israel (July 2009–June 2016). The study was conducted in all 27 medical health centers routinely obtaining cerebrospinal fluid (CSF) and blood cultures from children and adults: 26 hospitals and 1 major outpatient health maintenance organization. Less than 1% of blood cultures and no CSF cultures were obtained outside these centers. This setting enabled us to cover all culture-confirmed IPD cases among the population of Israel (15).

IPD isolates are sent regularly to the national reference center at the Central Laboratories of the Ministry of Health in Jerusalem for confirmation and serotyping (15,16). Since 2009, active surveillance on IPD in all ages has been conducted in all 27 laboratories performing blood cultures in Israel. The capture–recapture method ensured the reporting of >95% of cases. Using these data, we completed the isolates missing from the passive surveillance system, so that all S. pneumoniae isolates from blood, CSF, or both collected during the relevant period in Israel were included in this study. Eventually, S. pneumoniae strains from 4,573 IPD cases, isolated from blood or CSF, were included in the study. The population breakdown during the study period is given in Table 1. During this period, the Jewish population was ≈79% of the total population (24).

We defined an IPD episode by isolation of S. pneumoniae from blood or CSF. We excluded positive cultures from sterile sites other than blood or CSF (i.e., joint/pleural fluid or peritoneal fluid) (15,16), as well as diagnoses based solely on nonculture methods (PCR, antigen testing, Gram stain, or clinical diagnosis only).

We inoculated S. pneumoniae cultures onto tryptic soy agar plates supplemented with 5% defibrinated sheep blood (Hy-labs, Rehovot, Israel) and incubated them at 37°C for 24 hours in a 5% enriched CO2 atmosphere. Identification of S. pneumoniae was done as previously described (15).

All strains were serotyped by the Quellung test; since 2013, the serotype has been determined by a validated combination of the capsular sequence typing molecular typing protocol and serotyping using the antisera of Statens Serum Institute (Copenhagen, Denmark). Serotype 6A was differentiated from serotype 6C by PCR (10).

We determined susceptibility to penicillin for Sp12F strains by the oxacillin disk diffusion screening method of Bauer and Kirby and Etest (BioMérieux, Marcy l’Étoile, France) according to Clinical and Laboratory Standards Institute (CLSI) guidelines (25). Because Sp12F often causes meningitis, we set the susceptibility cutoff values according to the CLSI cutoff for meningitis. Thus, we defined isolates with penicillin MICs of <0.06 μg/mL as susceptible to penicillin and considered those with MICs >0.06 μg/mL to be nonsusceptible.

We determined the genetic relatedness for all IPD strains isolated since 2009 and all Sp12F strains isolated during 2000–2008 available in our strains bank. We prepared and analyzed chromosomal DNA fragments generated by SmaI digestion as described previously (11,26,27), with modifications.

We performed genotype analysis and clustering using the Bionumerics version 7.6 software package (Applied-Maths, Sint-Martens-Latem, Belgium) with dice coefficients, a 1% position tolerance, and optimization values. We performed cluster analysis by the unweighted pair-group mean analysis. All isolates in the same cluster, defined as clonal, were assigned a letter, A to T, for analysis purposes.

We designed new primers for allele amplification and sequencing. These primers do not contain degenerative bases; an M13 tag on each 5′ primer sequence was added to ease sequencing setup (Table 2). Sequencing of the forward and reverse amplicons was performed at the Center for Genomic Technologies, Institute of Life Sciences, The Hebrew University of Jerusalem (Jerusalem, Israel), using BigDye Terminator v1.1 chemistry (Applied Biosystems, Foster City, CA, USA).

We performed genomic data analysis for capsular sequence typing, PFGE, and MLST using Bionumerics version 7.6 software (Applied Maths). We retrieved MLST allelic profiles and STs from the S. pneumoniae MLST database (29) and submitted the new alleles and STs to the database curator for ST assignment. We compared MLST data with all Sp12F strains submitted to PubMLST.

The data from the active surveillance during 2009–2016 are presented according to epidemiologic years, July through June. Each isolate was counted only once per episode; episodes were separated by >30 days for the same serotype or by any interval for different serotypes. Rate reductions and ratios were calculated. The following age groups were defined: <5 years, 5–17 years, 18–64 years, and ≥65 years of age. 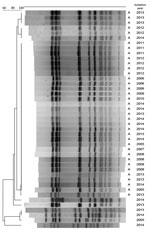 To assess the association between PCV7/PCV13 introduction and the dynamics of Sp12F rates, we analyzed strains isolated during 2000–2015. Overall, we analyzed 445 Sp12F strains by PFGE (Figure 4). The isolate population consists of a predominant pulsotype (A; 90.1% of isolates), and several other diverse pulsotypes (Figure 5). The predominant pulsotype was observed throughout the study period and was consistently prevalent among the Sp12F population; thus, the observed more general serotype Sp12F increase following PCV7/PCV13 introduction can be attributed to an expansion of this single clone during the study period.

We compared the MLST type with isolates reported as Sp12F in the global PubMLST database (29). This database contains 283 isolates serotyped as Sp12F and 105 sequence types. Among these isolates, the most common STs are ST218 and ST989, as previously published (17,18,22,23) (Figure 6). ST3774 is rare among isolates submitted to this global database, with only 1 isolate reported from Israel in 2006.

S. pneumoniae serotype 12F, a non-PCV13 serotype, is currently the most prevalent pneumococcal serotype causing IPD in Israel. This previously rare serotype caused 434 IPD cases during July 2009–June 2016 and became prevalent in all age groups, most distinctly in young children. The population of Sp12F during 2000–2016 was >90% of the same clonal complex according to PFGE and MLST analyses, indicating the expansion of the ST3774 sequence type, which is currently unique to Israel. The predominant global Sp12F outbreak clones ST218 and ST989 (21) are very rare in IPD cases in Israel.

Sp12F was previously reported to have high invasive disease potential and is sometimes called hyperinvasive (8,30–32). It was reported as the most common serotype causing IPD in Japan (31,32), and it has been the cause of an IPD outbreak in Canada (8). Furthermore, several sites reported high disease potential for meningitis with Sp12F (30,33), and several Sp12F outbreaks have been reported in the literature among closed or crowded populations (18,34), including daycare centers (35), military groups (34), a jail (20), and a homeless shelter (36).

In a recent study from France that evaluated the invasive potential of specific serotypes and compared nasopharyngeal carriage in healthy children to carriage in children infected with IPD, Sp12F was shown to be a major cause of IPD but was not found in nasopharyngeal cultures (30). Furthermore, in Israel, Sp12F was rarely found in carriage studies before and after vaccination trials (14,37,38). These findings emphasize both the invasive nature of Sp12F and its failure to become a successful colonizer.

The emergence of IPD caused by Sp12F in Israel, mainly by clonal expansion, may be attributed, at least in part, to the observed more general serotype replacement after PCV implementation. The emergence of this serotype in the youngest age groups after PCV7/PCV13 introduction supports this hypothesis. However, the previously reported low carriage rate of Sp12F may counter this possibility, and current data on Sp12F carriage in Israel are needed to support this theory. Alternatively, a large-scale clonal outbreak, of long duration and high invasiveness rather than true replacement, may be at the origin of this serotype emergence.

Our results emphasize the role of Sp12F as a serious current public health challenge. Continued monitoring of IPD and specific serotype distribution are needed to enable the development of future vaccination strategies. The evolutionary origin of this emerging clone will be further studied by whole genome sequencing, which may offer insights into the virulence of Sp12F strains.

Dr. Rokney is head of the National Reference Centers at the Government Central Laboratories of the Israel Ministry of Health, Jerusalem. His research interests include molecular typing and epidemiology of infectious diseases.