Visceral leishmaniasis, a fatal disease if not treated, is caused by Leishmania parasites. This disease might be overlooked in the Middle East because of limited awareness and low incidence. We report 5 patients who died of visceral leishmaniasis in Lebanon and make recommendations to improve faster diagnosis and treatment.

Leishmaniasis is a parasitic disease characterized by different clinical manifestations depending on patient immune response and causative species (1). Visceral leishmaniasis, the most severe form, is fatal if untreated (2). This disease is caused by Leishmania donovani, which is endemic to Africa and Asia, causes anthroponotic visceral leishmaniasis, and is associated with high mortality rates (3). However, L. infantum, which undergoes zoonotic transmission, is associated with fewer deaths and is endemic to Latin America and the Middle East (4). This species shows a mortality rate of 6% for children (5).

Recently, displacement of refugees during the ongoing crisis in Syria resulted in a massive population migration and spread of communicable diseases, including cutaneous leishmaniasis (6,11). In Lebanon, 2,420 families from Syria were given a diagnosis of cutaneous leishmaniasis. As of April 2017, a total of 2,057 (85%) of these families were infected with L. tropica and 363 (15%) with L. major (6). These infections indicate the need for early diagnosis of visceral leishmaniasis and prevention of deaths in the Middle East. We report visceral leishmaniasis in refugees from Syria in Lebanon who acquired L. infantum in Syria.

Five refugee children from Syria (age range 2–11 years) died of visceral leishmaniasis during 2014–2017 because of a late diagnosis and lack of awareness of this disease in Lebanon. All 5 children had migrated from the northern coast of Syria to Lebanon and had resided in Beirut for an average of 9 months (range 7–11 months). Visceral leishmaniasis developed 4–6 months after they left Syria. Further investigations showed that the siblings of 3 of these patients were infected while staying in Syria. 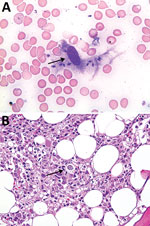 These 5 patients were then reevaluated at the American University of Beirut Medical Center (Beirut, Lebanon) after an average of 4.8 months. Microscopic examination of bone marrow aspirates and smear specimens showed a few scattered amastigotes within macrophages for 2 patients (Figure).

A diagnosis of visceral leishmaniasis caused by L. infantum was confirmed by PCR amplification of the internal transcribed spacer 1 region of the parasite (13), followed by restriction fragment length polymorphism analysis of the internal transcribed spacer 1 region amplicon (14). This analysis specifically distinguishes L. infantum from other Leishmania species. After confirmation of visceral leishmaniasis, the patients were treated with Abelcet (amphotericin B lipid complex) (Teva Pharma BV, Harlow, UK) according to the manufacturer’s guidelines. However, the delay in diagnosis led to an advance disease stage and lack of response to treatment, followed by death.

We report 5 children among refugees from Syria in Lebanon who died of visceral leishmaniasis caused by L. infantum. Our report provides insightful baseline information about knowledge, practices, and control regarding this disease. The combination of hepatosplenomegaly, fever, and pancytopenia should raise the suspicion for visceral leishmaniasis and result in prompt intervention. These interventions might prevent misdiagnosis and enable appropriate treatment strategies at early stages of the disease to reduce the number of deaths.

Rana El Hajj is a doctoral student at the American University of Beirut Medical Center, Beirut, Lebanon. Her primary research interest is investigation of specific therapies for leishmaniasis.