During November–December 2017, a mass die-off of Guiana dolphins (Sotalia guianensis) began in Rio de Janeiro, Brazil. Molecular and pathologic investigations on 20 animals indicated that cetacean morbillivirus played a major role. Our findings increase the knowledge on health and disease aspects of this endangered species.

Cetacean morbillivirus (CeMV; family Paramyxoviridae) is a highly infectious pathogen responsible for numerous cetacean mass die-offs worldwide. Currently, there are 3 well-characterized strains (1), the porpoise morbillivirus, the dolphin morbillivirus, and the pilot whale morbillivirus, and 3 less-known strains, including the novel Guiana dolphin strain (GD)–CeMV, recently identified in a single specimen from Brazil (2). CeMV was detected in Ireland, England, and the Netherlands in 1988–1990 (3,4), when the porpoise morbillivirus strain was identified in a small number of stranded harbor porpoises (Phocoena phocoena). Since then, CeMV has been implicated as the causal agent of numerous outbreaks and also endemic, sporadic deaths involving multiple cetacean species throughout the North Sea, north Atlantic Ocean, Mediterranean Sea, Black Sea, Indian Ocean (Western Australia), and Pacific Ocean (Hawaii, Japan, and Australia) (1).

To date, no epizootics linked to CeMV causing the death of large numbers of marine mammals has been detected in the South Atlantic. A Guiana dolphin (Sotalia guianensis) stranded in Espírito Santo, Brazil, which tested positive for CeMV by reverse transcription PCR (RT-PCR) and immunohistochemistry, has been the only confirmed fatal case in South Atlantic cetaceans (2). We describe the results of pathologic and molecular investigations on 20 deceased Guiana dolphins in the onset of the ongoing unusual mortality event in Rio de Janeiro, Brazil.

During November–December 2017, a unusual mortality event involving 56 Guiana dolphins began in Ilha Grande Bay, Rio de Janeiro (Brazil; 23°4′45′′–23°13′38′′S, 44°5′30′′–44°22′28′′W). This area is a relatively well-preserved ecosystem, and Guiana dolphin population census size in this area was estimated at ≈900 animals (5). Stranding occurrence for the same period in previous years ranged from 0 to 3 specimens. During this event, carcasses were recovered adrift or washed ashore. We performed necropsies on 20/56 (37.7%) Guiana dolphins and recorded epidemiologic and biologic data (Table 1). 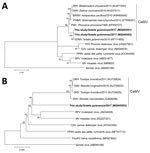 We detected CeMV genome in 15/20 (75%) animals for the P gene and 6/6 (100%) animals for the L gene. We sequenced amplified products and compared them with sequences of CeMV using blastn (http://blast.ncbi.nlm.nih.gov/Blast.cgi). We obtained identical sequences for the L gene, and 2 sequences with variation in 1 nucleotide position for the P gene. Sequencing of 405-bp amplified fragments of the CeMV P gene revealed 99%–100% identity to GD-CeMV (2) and 78%–82% identity with other CeMV strains. A 443-bp amplified fragment of the CeMV L gene revealed 74%–75% identity to CeMV and other morbillivirus species. Partial P and L gene sequencing and analysis using MEGA7 (http://megasoftware.net/) corroborate that the GD-CeMV strain differed from other morbilliviruses and represented a distinct lineage (Figure 1).

For histologic examination, we embedded formalin-fixed tissues in paraffin wax, processed them as routine, and stained them with hematoxylin and eosin. We recorded detailed histopathologic findings of 6 animals positive for CeMV by RT-PCR (Table 2). One specimen had lesions consistent with CeMV infection, including marked multifocal, subacute bronchointerstitial pneumonia with type II pneumocyte hyperplasia, syncytia, and scattered intraepithelial, intranuclear, and intracytoplasmic inclusion bodies (INCIBs); mild to moderate multifocal histiocytic and lymphoplasmacytic mastitis with necrosis and epithelial INCIBs (Figure 2, panels A–C); and multicentric lymphoid depletion. In addition, most animals had moderate to severe verminous bronchopneumonia and pleuritis with morphologic evidence of pulmonary arterial hypertension, multicentric eosinophilic and necrotizing lymphadenitis, and chronic aortic endarteritis by adult nematodes and pulmonary endarteritis by migrating larval nematodes histomorphologically compatible with Halocercus brasiliensis (8). Other common findings included moderate to poor body condition and lack of ingesta with small amounts of feces. Two (10%) of the 20 animals (which were negative for CeMV by RT-PCR) showed typical external net markings and multiorgan acute hemodynamic alterations (congestion, edema, and hemorrhage) supporting asphyxia due to bycatch as the cause of death.

In this investigation, typical histopathologic findings consistent with CeMV were evident in 1 animal, indicating a systemic infection. Although chronic bronchointerstitial pneumonia and multicentric lymphoid depletion observed in most animals are common findings in CeMV-infected cetaceans, these lesions were considerably overlapped by H. brasiliensis endoparasitosis. The pathologic signatures of GD-CeMV remain unknown. No other CeMV strain has been described in the South Atlantic Ocean. In subacute and chronic CeMV presentations, fatalities are often ascribed to secondary infections (e.g., toxoplasmosis, aspergillosis) (9,10). In our cohort, autolysis precluded microscopic examinations in some animals, so we could not draw further pathologic conclusions. Nonetheless, moderate to severe parasitosis by H. brasiliensis likely accounted for severe illness in most cases. Intense viral replication in the mammary acinar epithelium in a lactating female may imply a vertical transmission route, in addition to the horizontal aerogenous and direct contact routes (10). Therefore, future pathologic and epidemiologic studies in the South Atlantic should consider vertical transmission. Two cases from this cohort were bycaught, further supporting the multifactorial nature of the ongoing unusual mortality event.

The Guiana dolphin is a coastal and estuarine delphinid endemic from southern Brazil to Central America and one of the most threatened South Atlantic cetaceans, for which recent studies demonstrate severe population decline (11). Because of its near-shore distribution and site fidelity (12), the Guiana dolphin is susceptible to the effects of human activities (e.g., habitat degradation, chemical pollution, noise, and bycatch) (13). Many intricate and complex anthropic and natural factors interplay and modulate the decline of species. Human activities are by far the major threat and cause for decimation of cetacean populations (14); however, natural factors such as highly infectious pathogens, e.g., CeMV, may drive decimating events in susceptible hosts (15).

We provide compelling molecular and pathologic evidence associating GD-CeMV infection with the ongoing Guiana dolphin mass die-off near Rio de Janeiro, Brazil. As of January 2018, this event had resulted in the deaths of >200 Guiana dolphins in southern Rio de Janeiro state, and the deaths appeared to be extending southward. The environmental consequences and conservation effects, coupled with the anthropogenic threats, are expected to be dramatic. The factors underlying the die-off are being investigated, but our results indicate that GD-CeMV plays a major contributory role. Our findings increase the body of knowledge on health and disease aspects of this endangered species.

Dr. Groch is a postdoctoral fellow studying the advancement of pathology of cetaceans in Brazil, particularly of infectious diseases. Her current research focuses on determining geographic and host ranges for CeMV, as well as delineating the pathologic signature and CeMV strains present in cetaceans of Brazil.

We thank the Laboratório de Mamíferos Aquáticos e Bioindicadores (MAQUA/UERJ) team for their assistance in stranding monitoring and necropsy procedures and Haydée A. Cunha for helpful comments on the draft of this manuscript.