During the first 4 months after diagnosis, the patient exhibited mild pancytopenia and compensated hemolysis but remained transfusion-independent. However, 6 months after PNH diagnosis, she began eculizumab treatment because of worsening symptoms.

Twenty-two hours after her second dose of eculizumab, the patient reported to a local emergency department with generalized body pain, headache, and emesis. She was afebrile, and her physical examination was unremarkable except for tachycardia of 124 beats per minute. Her leukocyte count was 8.9 × 109 cells/L (within reference limits); absolute neutrophil count was 8.46 × 109/L (upper limit 8.00 × 109 cells/L). Her symptoms were attributed to side effects from eculizumab and resolved after treatment with prochlorperazine, ketorolac, diphenhydramine, and intravenous fluids. She was discharged to home after 2 hours of observation.

By whole-genome sequencing, the meningococcal strain isolated from the meninges was found to be sequence type (ST) 2578 (clonal complex ST-41/44) and nongroupable with a capsule null locus, cnl. The inferred amino acid sequences of Factor H binding protein (FHbp) (peptide ID 100) and Neisseria heparin binding antigen (NHba) (peptide ID 2) were 97% and 100% identical to the respective antigens in the MenB-4C vaccine the patient had received, and both antigens were expressed on the surface of live bacteria based on flow cytometry. The remaining MenB-4C antigens were either absent (NadA) or mismatched (strain PorA P1,17,9).

Using 15% IgG-depleted human serum as a complement source, we found the strain was susceptible (titer >40) to bactericidal activity of mouse antiserum to recombinant FHbp ID 1, the subfamily B subvariant in the MenB-4C vaccine but not to mouse antiserum to NadA (not expressed by the strain) or to FHbp ID 22 (a subfamily A subvariant not in the vaccine) (titers <10). Mouse anti-NHba antiserum had a titer of <10. The relative resistance to anti-NHba was similar to previous findings that some NHba-expressing serogroup B meningococcal strains resist MenB-4C vaccine–elicited anti-NHba serum bactericidal activity (SBA) in humans (7).

A postmortem serum sample had high IgG reactivity against FHbp and NHba, both expressed by the infecting strain, and low reactivity to NadA (Figure 1). The high IgG reactivity specific for the 2 vaccine antigens expressed by the strain, but not for the vaccine antigen absent in the strain, suggests these antibodies may represent an IgG memory response elicited by infection. Given the short duration of symptoms, the likely stimulus for the memory antibody response would be asymptomatic nasopharyngeal colonization before disease onset. 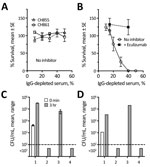 We also measured bactericidal activity against the patient isolate using pooled IgG-depleted serum from 3 healthy unvaccinated adults, performed as previously described (9). Whereas 2 invasive serogroup B encapsulated strains survived in the IgG-depleted serum pool (Figure 2, panel A), the nongroupable case-strain was killed (Figure 2, panel B), which could be from complement alone or complement activated by naturally acquired IgM. However, 50 µg/mL of eculizumab (a concentration less than or equal to trough serum levels in treated patients [10]) completely blocked killing of the case-isolate (Figure 2, panel B).

Finally, we tested eculizumab’s effect on whole blood killing of the unencapsulated case-isolate in an assay that measures a combination of SBA and opsonophagoctyic (OPA) activity (11,12). Cultures were sterile after 1–3 hours incubation in anticoagulated whole blood from MenB-4C–vaccinated or –unvaccinated adults (Figure 2, panels C, D), but 50 µg/mL eculizumab completely blocked bacterial killing. In contrast, the addition of a mouse monoclonal antibody to C7 (required for SBA but not OPA) did not prevent killing. These findings extend prior studies of whole blood killing of encapsulated serogroup B and C strains, which demonstrated that blocking C5 cleavage inhibited both SBA and OPA (11,12) killing of these strains, to a nonencapsulated meningococcal strain.

Collectively, these data indicate that eculizumab-treated patients remain profoundly susceptible to meningococcal disease, including from nongroupable meningococcal strains. Neither prior vaccination with MenB-4C, which matched 2 antigens present in the strain, nor the high serum antibody levels to FHbp and NHba in the patient prevented rapidly fatal disease in the presence of eculizumab. Similarly, eculizumab blocked killing of the nongroupable isolate by whole blood from healthy unvaccinated and vaccinated adults.

This case, along with several additional cases of meningococcal disease caused by nongroupable strains, was recently reported in eculizumab recipients in the United States (13). In otherwise healthy hosts, virtually all invasive meningococcal disease is caused by encapsulated strains (14). In contrast, unencapsulated strains are commonly associated with asymptomatic nasopharyngeal carriage. The sequence type of the isolate from this case, ST-2578, is rarely found in the PubMLST Neisseria database but previously has been observed primarily among isolates from asymptomatic carriers (15). Furthermore, the strain was killed by complement in human serum that had been depleted of IgG and by whole blood from an unvaccinated adult, features of commensal meningococcal strains that lack capsules.

Dr. Nolfi-Donegan is a pediatric hematology-oncology fellow at Children’s Hospital of Pittsburgh of the University of Pittsburgh Medical Center in Pittsburgh, Pennsylvania. Her primary research interests are coagulopathies and platelet disorders.

We thank Jarad Schiffer, Gowrisankar Rajam, and Cheryl Ellie for assistance with relevant assays not described here; the Centers for Disease Control and Prevention for characterizing the strain; and Jennifer Picarsic for her contribution to the pathology findings on autopsy.