We identified 2 methicillin-resistant Staphylococcus aureus strains of sequence type 398 from surgical site infections in China. Genetic analysis and clinical data from these strains suggested that they were human-related but sporadic. Hemolysis analysis and mouse-skin infection models indicated a high virulence potential for these strains.

Methicillin-resistant Staphylococcus aureus (MRSA) can cause a variety of infections, such as skin and soft tissue infection (SSTI), pneumonia, and sepsis. MRSA can also cause surgical site infections (SSI), which are the most common type of healthcare-associated infections in hospitals (1). In addition, MRSA infection has been reported in animals, including pigs, veal calves, and poultry (2). Livestock-associated MRSA (LA-MRSA) was first reported in humans in the Netherlands in 2003 (3), and numerous countries have subsequently reported the presence of this MRSA variant. Although LA-MRSA belongs to several clone complexes, the major clone of LA-MRSA belongs to sequence type (ST) 398 (4).

Several infections caused by MRSA ST398 have been reported in the community, ranging from mild skin infections to serious invasive infections, both with and without livestock contact. Fatal cases of septicemia were also reported in Japan and Denmark (5,6). MRSA ST398 isolates from human postoperative surgical site infections were presented with complete genome sequencing in Canada and in a long-term MRSA surveillance study in the United Kingdom (7,8). The virulence potential of MRSA ST398 isolated from SSI has not been reported to date.

We studied 2 MRSA ST398 strains from surgical site infections, focusing on their clinical characteristics, genetic features, and virulence potential. The study was approved by the local ethics committees in Sir Run Run Shaw Hospital with a waiver of informed consent (approval no. 20150115-1). Mouse experiments were performed with approval from the Institutional Animal Ethics Committee of Zhejiang University (approval no. ZJU2015-141-01).

From January 2013 through December 2014, we collected a total of 147 Staphylococcus aureus isolates at Fuyang Hospital of Traumatology and Orthopedics of Traditional Chinese Medicine, a tertiary hospital in Hangzhou, China, with ≈500 beds. We performed multilocus sequence type (MLST) analysis on 18 SSI MRSA isolates from patients who underwent orthopedic surgery. We detected 2 MRSA strains, FY20 and FY22, which belong to ST398.

We characterized these strains by antimicrobial drug susceptibility testing, whole-genome sequencing and comparison, hemolysis analysis, and a mouse skin infection model. We included 2 community-acquired MRSA (CA-MRSA) strains isolated from patients in 2015 at Sir Run Run Shaw Hospital for comparison; SR389 was isolated from a 32-year-old female outpatient with a left neck mass, and SR411 was isolated from a 21-year-old female outpatient with lower extremity nodules and an ulcer. We sequenced the genomes on an Illumina HiSeq2000 platform (Illumina, http://www.illumina.com). We deposited the draft genome of FY20 as GenBank accession no. NTMC00000000, for FY22 as NXFU00000000, for SR389 as PDFA00000000, and for SR411 as PDFB00000000. We imported FASTA files into SeqSphere+ software version 4.1 (Ridom GmbH, http://www.ridom.de/seqsphere) for analysis (9). We detected virulence and resistance genes using the Center for Genomic Epidemiology website (http://www.genomicepidemiology.org).

We collected supernatants from bacterial cultures grown at 37°C for 24 h with shaking at 180 rpm. We determined hemolytic activities by incubating samples with human red blood cells (2% vol/vol in Dulbecco’s phosphate-buffered saline) for 1 h at 37°C and subsequently by measuring the optical density at 540 nm using an ELISA reader. We performed the mouse skin infection model using BALB/c female nude mice, 4–6 weeks of age. We injected anesthetized mice subcutaneously with ≈1 × 107 bacterial cells in 50 μL phosphate-buffered saline in the back. We measured length and width of the abscess or lesion for 6 days with calipers, and calculated abscess size by length × width. We euthanized all mice 6 days after injection. We used South Korea CA-MRSA strain HL1 (ST72) and its mutant HL1△agr in the skin infection model and the hemolysis study for comparison (10). We performed statistical analysis using GraphPad Prism version 7.01 (GraphPad Software, https://www.graphpad.com). 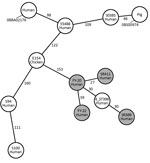 Antimicrobial susceptibility testing results showed that the 4 ST398 strains in our study had a similar resistance phenotype; they displayed resistance to β-lactam antimicrobial drugs but were susceptible to most other antimicrobial drugs. FY20 and SR411 were resistant to clindamycin and erythromycin. Resistance genes detected using the Center for Genomic Epidemiology site matched the resistance phenotypes (Table). The 4 ST398 strains were negative for tetM and czrC, were positive for φSa3, and displayed susceptibility to tetracycline. We classified FY20, FY22, and SR389 into SCCmec V and spa-type t034, and SR411 into SCCmec V and spa-type t1255. We built a minimum-spanning tree based on the core genome MLST (cgMLST) allelic profiles (Figure 1). There were 27 allelic differences by cgMLST analysis between FY20 and SR411; for 5 pairs of other strains from our study (FY20 and FY22, FY20 and SR389, FY22 and SR389, FY22 and SR411, and SR389 and SR411), there were >30 allelic differences. From a previous study, 9–29 allelic differences can be considered possibly related, whereas >30 are considered unrelated (11). When we compared the strains in our study to MRSA ST398 strain 4_ST398 from a hospital in Shanghai (12), we found 30–40 allelic differences between each of our 4 strains and the reference strain. There were >150 allelic differences between the SSI strains in our study and other ST398 strains, including animal- and human-related strains, from other studies (7,13,14).

Figure 2. Virulence phenotype of MRSA ST398 isolates. A) Hemolysis analysis. The hemolytic activity of culture filtrates grown for 24 h was measured in triplicate at given dilutions. The mean and SE are...

All 4 strains in our study contained the same virulence factors (Table). We analyzed the lysis of human erythrocytes, which is a key determinant of S. aureus virulence. Erythrocyte lysis by SR389, FY20, and FY22 was stronger than for CA-MRSA HL1 (p<0.05) (Figure 2, panel A), whereas SR411 showed a relatively weaker lytic capacity. We used a mouse skin infection model to evaluate the virulence potential of ST398 strains in vivo. In this model, abscesses caused by SSI strains (FY20 and FY22) were significantly larger than those caused by SR411 and the HL1 agr mutant (p<0.05) and were similar to those caused by SR389 and HL1 (p>0.05) (Figure 2, panel B). These findings demonstrated the pronounced virulence potential of SSI ST398 strains to cause invasive skin infections similar to those associated with HL1, which was a predominant CA-MRSA clone in South Korea.

We reported 2 ST398 MRSA strains causing SSI, which were classified into hospital-acquired MRSA according to the Centers for Disease Control and Prevention definition (15). The clinical data and cgMLST results indicated no clonal transmission in these 2 cases. These 2 patients denied livestock contact, and further genetic analysis showed characteristics of human-associated isolates. It is possible that the 2 patients were colonized with ST398 MRSA in the community and their infections developed later, after surgery. A limitation of this study is that we detected only 2 ST398 HA-MRSA strains, which means that it is difficult to evaluate the spreading trend and the threat of this lineage in the healthcare setting. However, our results revealed the emergence and transmission pattern of ST398 MRSA in the surgical department of a hospital in China.

Miss Sun is a student at Zhejiang University School of Medicine. Her research focuses on MRSA infections and using whole-genome sequencing to investigate the changing epidemiology of CA-MRSA in China.

We thank Min Li for providing the sequence file of the MRSA ST398 strain.