Trends in Azole Resistance in Aspergillus fumigatus, the Netherlands, 1994–2016

Azole resistance is increasingly reported in Aspergillus fumigatus and is now found all around the world (1). Most studies have investigated the presence of resistance in environmental or clinical samples over a limited time, but longitudinal resistance studies are lacking. It is important to determine if azole resistance frequency shows increasing trends over time and if the distribution of resistance mutations changes over time. We have previously reported the emergence of azole resistance from 1994–2007 for the Radboud University Medical Center (RUMC) in Nijmegen, the Netherlands (2). Here, we describe trends in resistance frequency and distributions of mutations over a 23-year period, from 1994 through 2016.

All clinical A. fumigatus isolates cultured at RUMC are screened for azole resistance. Before 2009, isolates were screened using an agar-slant supplemented with 4 mg/L itraconazole (2). During 2009–2011 a 4-well plate was developed containing itraconazole (4 mg/L), voriconazole (1 mg/L), posaconazole (0.5 mg/L), and a growth control. Since 2012, we have used a commercial agar-based screening system (VIPcheck, http://www.vipcheck.nl) containing 2 mg/L of voriconazole (3,4). We performed EUCAST susceptibility testing (http://www.eucast.org) and sequencing of the cyp51A gene and promoter on isolates that grew on azole-containing wells (2). 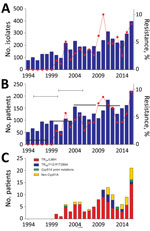 Figure. Trends in azole resistance in Aspergillus fumigatus, the Netherlands, 1994–2016. A) Resistance frequency by number of total cultured A. fumigatus isolates and percentage of azole-resistant isolates. B) Patient-adjusted proportion of resistance....

We observed an increasing trend in azole resistance prevalence in clinical A. fumigatus isolates until 2011, using number of patients with a positive culture as denominator. After 2011, the 5-year proportion of resistance remained stable. The advantages and disadvantages of different approaches of reporting resistance frequency remain under debate (5). Experts have recommended 10% resistance rate as the threshold for reconsideration of primary antifungal therapy (6), which indicates a need for consensus in how to determine resistance rates (5).

Various factors might have caused bias over the long period. The method of resistance detection changed from an agar-slant containing itraconazole to a system that contained 3 azoles. Voriconazole- or posaconazole-resistant isolates with low itraconazole MICs may have been initially missed, but this phenotype is very uncommon (7). Other factors include increased awareness of resistance, the policy to screen multiple A. fumigatus colonies after observation of patients with mixed azole-susceptible and azole-resistant infection (8), and local changes in aspergillus disease risk groups.

Resistance was dominated by environmental resistance mutations TR34/L98H and TR46/Y121F/T289A, although the number of patients with TR46/Y121F/T289A decreased in recent years. Furthermore, in the last 5 years, ≈15% of resistant isolates harbored a wild-type Cyp51A gene, suggesting that other resistance mechanisms may be emerging. Because commercial PCR tests detect only resistance mechanisms with TR34 (9) or TR34 and TR46 (10), our observation is relevant for using these assays in culture-negative patients.

In summary, our study indicates an increasing azole resistance trend in clinical A. fumigatus isolates in the Netherlands. Furthermore, our results highlight difficulties encountered in establishing local epidemiology of this resistance.

Dr. Buil is currently a resident in clinical microbiology and a PhD student at Radboud University Medical Center in Nijmegen, the Netherlands. His research interests include the diagnosis of azole-resistant aspergillosis and preclinical studies of new antifungal agents.

This study was supported by internal funding.

Disclosures: P.E.V. has received research grants from Gilead Sciences, Astellas, Merck Sharp & Dohme (MSD), F2G, and BioRad, is a speaker for Gilead Sciences and MSD, and is on the advisory boards for Pfizer, MSD, and F2G. All other authors have nothing to declare.

Trends in Azole Resistance in Aspergillus fumigatus, the Netherlands, 1994–2016