Elizabethkingia infections are difficult to treat because of intrinsic antimicrobial resistance, and their incidence has recently increased. We conducted a propensity score–matched case–control study during January 2016–June 2017 in South Korea and retrospectively studied data from patients who were culture positive for Elizabethkingia species during January 2009–June 2017. Furthermore, we conducted epidemiologic studies of the hospital environment and mosquitoes. The incidence of Elizabethkingia increased significantly, by 432.1%, for 2016–2017 over incidence for 2009–2015. Mechanical ventilation was associated with the acquisition of Elizabethkingia species. Because Elizabethkingia infection has a high case-fatality rate and is difficult to eliminate, intensive prevention of contamination is needed.

The genus Elizabethkingia comprises glucose-nonfermenting, gram-negative rods that are widely distributed in natural environments, including in soil and freshwater, and in hospital environments (1). E. meningoseptica (originally named Chryseobacterium meningoseptica) has been associated with opportunistic infections, such as sepsis in immunocompromised patients and meningitis in neonates (2). Two new species of Elizabethkingia have been proposed: E. miricola, which was first isolated from water from the Russian space station MIR in 2003 (3,4); and E. anophelis, which was first isolated from the midgut of the Anopheles gambiae mosquito in 2011 (5). Because E. anophelis was the most frequently isolated Elizabethkingia species in recent clinical studies, as confirmed by 16s rRNA gene sequencing (6,7), but is commonly misidentified as E. meningoseptica, many previously reported cases of E. meningoseptica could actually have been caused by E. anophelis (8,9).

Infection caused by Elizabethkingia species is difficult to treat and results in a high case-fatality rate, probably because of intrinsic antimicrobial resistance (10). E. meningoseptica has been documented to carry class A extended-spectrum β-lactamases and 2 chromosomal metallo-β-lactamases (11,12).

We retrospectively collected data from all nonduplicate persons who had positive culture results for Elizabethkingia species from Severance Hospital, a >2,000-bed tertiary teaching hospital in South Korea, during January 1, 2009–June 30, 2017. The hospital had 10 intensive care units (ICUs) for adults and 2 for children. During this period, the annual number of inpatient-days was >670,000. 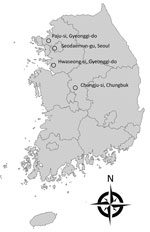 All swab samples and midguts of mosquitoes were inoculated on sheep blood agar and MacConkey agar and incubated overnight. DNA was extracted from mosquitoes using a simple boiling method, and PCR was performed using Elizabethkingia species–specific primers (forward, GAACACGTGTGCAACCTGCC; reverse, TCCAGCCACTTCAACCTTAC) and the following cycle parameters: 95°C for 5 min, followed by 35 cycles of 95°C for 30 s, 58°C for 2 min, and 72°C for 1 min; followed by a final extension step at 72°C for 7 min (22).

We defined true pathogen cases according to the definitions of Moore et al. and the Centers for Disease Control and Prevention. In brief, we defined these cases as patients with the monomicrobial acquisition of Elizabethkingia species and 1 of the following parameters within 2 days before and after acquisition without any other recognized cause: body temperature <36°C or >38°C, pulse rate >90 beats/min (reference range 60–100 beats/min), leukocyte count <4 or >12 × 109 cells/L (reference range 4.0–10.9 × 109 cells/L), C-reactive protein >100 mg/L (reference range 0–8 mg/L), or chest radiography showing new pulmonary infiltrations (13,23). According to previous studies, outbreaks are determined by whether they exceed 2 SD of the previous disease incidence (24,25).

After 2016, the incidence of isolated Elizabethkingia species increased significantly. To analyze the increased incidence, we conducted surveillance culture study and compared clinical characteristics of patients who acquired Elizabethkingia species before and after 2016. In both the surveillance culture study and the statistical analysis, only 3 study wards showed positive results for the acquisition of Elizabethkingia: an ICU (ICU 1, 18 beds) used for cardiovascular disease, an isolation ward (ward A, 50 beds) used for patients with vancomycin-resistant Enterococcus, and a general ward (ward B, 50 beds) used for pulmonary disease patients. A total of 6,583 patients have been hospitalized in these wards since 2016.

To adjust confounding factors for the acquisition of Elizabethkingia species, we conducted a propensity score (PS)–matched case–control study. We defined case-patients as patients with Elizabethkingia species isolated from any clinical specimens during January 2016–June 2017 in ICU 1, ward A, or ward B and control patients as patients without Elizabethkingia species in these 3 study wards. We selected 3 variables—hospital ward (p<0.001), period of admission (p = 0.041), and length of stay in the 3 study wards (p<0.001)—for adjustment by univariate analysis (26,27). We estimated a PS for the predicted probability of acquisition of Elizabethkingia species in each patient using the logistic regression model. Then we performed a PS-matched analysis by attempting to match case-patients and control patients (1:3 match) using the nearest-neighbor-matching method. A match occurred when the difference in the logits of the PS was <0.2 times the SD of the scores.

Using conditional logistic regression, we conducted univariate and multivariate regressions between case-patients and control patients of the 3 study wards. Dependent variables included in the multivariate analysis were selected based on statistical significance provided by univariate analysis. Incidence rate ratios and 95% CIs were calculated by comparing the mean incidences between 2009–2015 and 2016–2017 by Poisson regression. 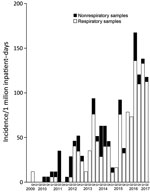 We isolated 12 Elizabethkingia strains; all were derived from the 3 study wards. Seven E. anophelis isolates (4 from water taps in ICU 1, 2 from washbasins in ICU 1, and 1 from the suction regulator in ward A), 3 E. miricola isolates (3 from washbasins in ward A), and 2 E. meningoseptica isolates (1 from the mechanical ventilator after removal from a patient and 1 from the suction regulator in ward B) were identified by surveillance cultures. 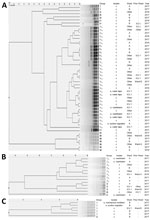 We conducted PCR on 30 Anopheles sinensis, 8 Culex tritaeniorhynchus, and 3 Aedes vexans mosquitoes and on surveillance cultures collected from the midgut of mosquitoes. All yielded negative results.

Epidemiologic Results Before and After PS Matching

We conducted PS matching to adjust baseline demographics and clinical variables between the case-patient and control-patient groups. PS matching resulted in 52 matched pairs at a 1:3 ratio. After matching, we included 52 of 74 case-patients in the analysis. Confounding variables were well balanced in the 2 groups, including hospitalization ward and the period of admission and length of stay in the 3 study wards. Furthermore, the 2 comorbidities after PS matching did not differ significantly because there was an adjustment to the proportions of admission to ward A, which had high rates of patients with hematologic malignancy, and ward B, which had high rates of patients with chronic pulmonary disease. However, use of mechanical ventilation still differed significantly after PS matching (p<0.001).

We used univariate and multivariate analyses with conditional logistic regression to identify independent risk factors (Table 4). Only use of mechanical ventilation (adjusted odds ratio [OR] 50.44 [95% CI 6.74–377.48]; p<0.001) was associated with the acquisition of Elizabethkingia species.

The incidence of infection with Elizabethkingia species has increased in recent years in many countries (14,16–19). Furthermore, a large-scale outbreak was reported in community settings in the United States (28).

In previous studies, the reported annual incidence of E. meningoseptica ranged from 0.007 to 0.399 cases per 1,000 admissions (19,29). We reported the antimicrobial resistance mechanisms and susceptibility rates of Elizabethkingia species isolated from Severance Hospital in 2010 (11) and 2016 (7). Recently, the incidence of isolation in this hospital increased significantly, from 0.02 to 0.88 per 1,000 admissions during 2009–2017, mainly in the 3 study wards.

Water or water-related equipment can serve as a waterborne pathogen reservoir in the hospital environment (31). Previous studies also have associated a water source with acquisition of Elizabethkingia because of the bacterium’s ability to form a biofilm in moist environments. Balm et al. reported the infections of 5 patients in 1 outbreak with E. meningoseptica were related to a hand hygiene sink aerator (14). Moore et al. identified 30 patients as having acquired E. meningoseptica during an outbreak; at least 10 of these infections were associated with 5 environmental samples isolated from sinks (13). Elizabethkingia can spread from a humid environment to the surface of medical devices or dry materials by the hands of hospital staff or patients (32). In our current study, all 12 environmental isolates shared identical PFGE patterns with clinical isolates. Our finding is consistent with prior reports that Elizabethkingia acquisition might be related to water sources within the hospital environment. In contrast, we could not find any evidence that the local mosquitoes of South Korea act as vehicles of Elizabethkingia transmission.

As extended-spectrum β-lactamase–producing bacteria have increased, the use of carbapenems has inevitably increased. Previous reports have suggested that antimicrobial selective pressure may increase the prevalence of bacteria with natural resistance to carbapenems, such as Elizabethkingia species (33,34). Unlike in our univariate analysis, our multivariate analysis showed no association between antimicrobial exposure to carbapenem and the acquisition of Elizabethkingia. One possible explanation for this finding could be that host factors are a more important selection factor than the antimicrobial drug in the selection of this strain. Another explanation could be that our data lacked the statistical power to detect differences in Elizabethkingia acquisition by antimicrobial exposure to carbapenem.

Difficulties in eradicating and terminating outbreaks of Elizabethkingia caused by a strong biofilm biotype have been reported (13,14,35). Furthermore, the failure of 1,000-ppm sodium hypochlorite and posthandwashing alcohol gel has been documented (34). The acquisition risk can be reduced by regular sink flushing and improvements to the workflow that minimize contamination (13). Fortunately, we succeeded in eliminating Elizabethkingia species in ward B in September 2017. After all structures from which bacteria were isolated were dismantled, the outer surface and inner spaces were cleaned. A sheer force was applied using a sodium hypochlorite solution and a brush, then structures were reinstalled. In ward B, no new patient acquisitions of Elizabethkingia occurred after this effort. These findings also support the possibility that Elizabethkingia acquisition may be related to water source and the contaminated devices. However, a previous study documented that Elizabethkingia species have been re-isolated after a month, even after all contaminated devices were replaced (14). Continuous monitoring, including surveillance culture systems and education for medical staff, may be more important than decontamination in reducing the acquisition of and infection with Elizabethkingia.

Among our data on treatment outcomes for true pathogen cases, none of the antimicrobial agents used after reporting the culture results were related to reducing in-hospital death. Alternatively, patients treated with carbapenem or trimethoprim/sulfamethoxazole had significantly higher in-hospital death rates. However, this analysis included only 30 true pathogen cases, and results could not be adjusted for other potential confounding factors.

The retrospective and single-center nature of the study limited our results. Thus, selection bias might exist in the tests performed on environmental samples and mosquito samples, and we could not identify the species of bacteria that were not stored. It is also difficult to perform additional surveillance cultures in the hospital setting because we have conducted elimination procedures to manage bacterial spread. However, we tried to analyze risk factors for Elizabethkingia acquisition by minimizing the selection bias using a PS-matched study and multivariate analysis.

Even after controlling for potential biases using PS matching analysis, we found mechanical ventilation to be an independent risk factor for the acquisition of Elizabethkingia species. Because Elizabethkingia infection has a high rate of death and is difficult to eliminate, intensive prevention of contamination is needed.

Dr. Choi is a microbiologist at the Department of Laboratory Medicine and Research Institute of Bacterial Resistance, Yonsei University College of Medicine, Seoul, South Korea. His primary research interests include antimicrobial resistance.