In Australia in 2015, Candida auris sternal osteomyelitis was diagnosed in a 65-year-old man with a history of intensive care treatment in Kenya in 2012 and without a history of cardiac surgery. The isolate was South Africa clade III. Clinicians should note that C. auris can cause low-grade disease years after colonization. 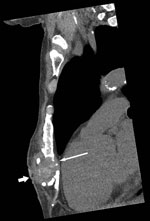 Candida auris, first reported in Japan in 2009 (1), is an emerging pathogen that has caused severe disease in hospitalized patients in many countries, including India, South Africa, Spain, the United Kingdom, the United States, and Venezuela (2–4). In July 2015, a 65-year-old man from Kenya visiting Australia for the first time sought treatment in Perth, Western Australia, Australia, for chronically discharging sternal sinus persisting for >1 year. His active medical problems included severe hypercapneic chronic obstructive pulmonary disease with pulmonary hypertension, ischemic heart disease, and chronic kidney impairment. In July 2012, he had unstable angina treated by coronary stenting that was complicated by cardiac arrest with cardiopulmonary resuscitation, which resulted in sternal injuries and a 3-month intensive care unit hospitalization in Nairobi, Kenya. At hospital admission, computed tomography scan of the chest showed a 3.3-cm subcutaneous collection and bony changes from chronic sternal osteomyelitis (Figure). Surgical debridement confirmed sternal osteomyelitis with parasternal abscesses. Posaconazole was given as pragmatic oral therapy, and trough serum levels of 2.0 mg/L at week 2 and 2.60 mg/L at week 4 were achieved. The patient died from progressive cardiorespiratory failure 3 months later.

Extensive nosocomial transmission of C. auris has been documented, and mortality rates of 40%–60% have been reported for patients with candidemia (2–4). C. auris can colonize human skin for months (5,6). Of 620 cases of C. auris infection linked to outbreaks in Europe during 2013–2017, a total of 466 (75.2%) patients became colonized (3). We postulate that our patient became colonized in 2012 in an intensive care unit in Kenya. This case also illustrates that clinical manifestations of C. auris infection can progress slowly for >12 months.

C. auris is multidrug resistant and, therefore, poses a risk for all patients, given the limited antifungal options available. Tentative C. auris–specific MIC breakpoints exist, pending further correlation between MICs and clinical outcomes (2). Proposed breakpoints are derived from expert opinion and/or those of closely related Candida species for antimicrobial drugs (e.g., amphotericin B) that do not have breakpoints. Despite breakpoint uncertainty and concerns about emergent multidrug resistance among C. auris isolates, we had prescribed oral posaconazole for our patient because of the in vitro MIC results and his strong preference for oral antifungal therapy.

In summary, we describe a case of travel-linked C. auris infection manifesting as chronic sternal osteomyelitis, diagnosed in Australia in 2015. The patient had a history of intensive care treatment in Kenya, a country with documented C. auris transmission (2), he required treatment in Australia 3 years later and exhibited clinically significant disease associated with South Africa clade III C. auris infection.

Dr. Heath is an infectious diseases physician in the Department of Infectious Diseases at Fiona Stanley Hospital and Royal Perth Hospital in Perth, Western Australia, Australia, and a clinical microbiologist for PathWest Laboratory Medicine, FSH Network, Perth; he has research interests in laboratory mycology and diagnostics and a special interest in infections in the immunocompromised host, particularly invasive fungal infections. Mrs. Gardam is the senior medical scientist in mycology for PathWest Laboratory Medicine; she has an active interest in diagnostics for pathogenic fungi and antifungal susceptibility testing, together with undergraduate and postgraduate education and teaching of medical mycology.

The authors thank the patient’s next of kin for providing permission to publish this case.