We describe a case of facial skin infection and sinusitis caused by Mycobacterium marseillense in an immunocompetent woman in China in 2018. The infection was cleared with clarithromycin, moxifloxacin, and amikacin. Antimicrobial drug treatments could not be predicted by genetic analyses; further genetic characterization would be required to do so.

Mycobacterium marseillense is a member of the M. avium complex (1) that has caused infections with lymphatic or pulmonary involvement sporadically in humans (2–4). We report M. marseillense infection involving facial skin in an immunocompetent woman in eastern China.

In April 2018, a 59-year-old woman was referred to our institute (Institute of Dermatology, Chinese Academy of Medical Sciences and Peking Union Medical College, Nanjing, China) for a 4-year history of an erythematous plaque with ulceration located on the right cheek. The primary lesion was a small erythematic patch that gradually developed into an asymptomatic ulcerative plaque (i.e., the plaque had no heat, swelling, pain, or pruritus). She also reported occasional bloody, purulent nasal discharge over the course of 2 years. Two years before visiting our hospital, cutaneous tuberculosis was suspected, so she received treatment for tuberculosis (rifampin, isoniazid, ethambutol, pyrazinamide) for 10 months. No obvious improvement was observed with this treatment. Her medical history was otherwise unremarkable. 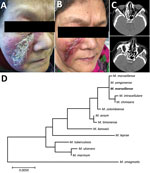 On physical examination, an infiltrated erythematous plaque with yellow scales and crusts on the right cheek was visible (Figure, panel A). Routine laboratory tests showed no remarkable findings. The results of autoantibody and HIV tests were negative, and immune subset cell counts were unremarkable. Histologic examination showed infiltration of a large number of lymphocytes, plasma cells, and neutrophils and some tissue cells in the dermis (Appendix 1 Figure 1). Computed tomography scan of the paranasal sinuses showed bilateral maxillary, right ethmoid, and frontal sinusitis (Figure, panel C). Culture and PCR for mycobacteria in nasal discharge yielded negative findings.

Referring to the guidelines for pulmonary M. avium complex disease, we treated the patient with the antimicrobial drugs clarithromycin, rifampin, and ethambutol (5). Afterward, in vitro drug susceptibility testing showed the isolate was sensitive to clarithromycin, azithromycin, and amikacin; moderately sensitive to moxifloxacin; and resistant to ethambutol and rifampin. Therefore, 3 months after initiating treatment, we changed the regimen to clarithromycin, moxifloxacin, and amikacin, which she received for 2 months. The patient’s skin lesions healed gradually, and nasal symptoms disappeared, but a scar and erythema remained (Figure, panel B). Computed tomography scans of the paranasal sinuses showed the reduction of sinusitis (Figure, panel C). No recurrence was observed during 4 months of monitoring.

M. marseillense infections are rare in humans. Our case demonstrates that M. marseillense can cause infections in immunocompetent persons. For facial skin infection with M. marseillense, this and similar (7) reports indicate the need for vigilance of paranasal sinus infection. Although many potential virulence factors could be detected by genomic analysis, cases of infection and transmission with this bacterium are rarely reported, suggesting the presence of other influencing factors.

We thank Jun Chen and Ying Shi for data analysis.