Zika virus infection during pregnancy can cause brain abnormalities, microcephaly, and other birth defects in exposed offspring (1,2). Although transmission of Zika virus primarily occurs through the bite of an infected mosquito, it can also be transmitted by having intercourse with an infected partner (3,4). In 2016, the Centers for Disease Control and Prevention (CDC) released guidance for prevention of sexual transmission of Zika virus for pregnant women and couples planning to conceive (3–5). In areas where Zika virus transmission was active, pregnant women and their male partners were advised to consistently and correctly use condoms when having intercourse or to abstain from intercourse during pregnancy to reduce the risk for sexual transmission of Zika virus (3–5). Corresponding with CDC guidance to healthcare providers (3–5), the American College of Obstetricians and Gynecologists and the Society for Maternal–Fetal Medicine released interim guidance outlining the need to provide counseling about recommended prevention measures to women and their partners who were at risk for exposure to Zika virus infection (6).

In 2016, the Puerto Rico Department of Health and CDC partnered to conduct the Pregnancy Risk Assessment Monitoring System–Zika Postpartum Emergency Response Study, a hospital-based survey that collected data from women after delivery and before hospital discharge about their prenatal experiences and behaviors related to detection and prevention of Zika virus infection during pregnancy (7). The island-wide study was implemented during August 28–December 3, 2016. Hospitals reporting >100 births during 2015 were eligible to participate. A total of 36 hospitals were eligible and agreed to participate, representing 98% of live births in Puerto Rico.

Women with a recent live birth who were residents of Puerto Rico, had delivered their infant in a participating hospital, and were able to complete the survey in Spanish or English were eligible to participate. To select the study sample, we randomly sampled delivery dates (clusters) within each hospital. All eligible women who delivered their infant on one of the randomly selected delivery dates were invited to participate. Hospital delivery logs were used to identify women for sampling. Sampled women were approached by study staff (24 hours after vaginal deliveries and 36 hours after cesarean deliveries). Overall, of 2,933 women eligible to participate, 2,364 (80.6%) completed surveys. 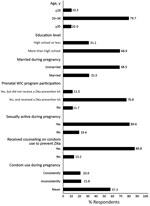 Of 2,229 respondents included in the analysis, most were 20–34 years of age (79.7%), had more than a high school education (68.9%), were unmarried (68.5%), and participated in the Special Supplemental Nutrition Program for Women, Infants, and Children (WIC) during pregnancy (88.3%). Most (80.6%) women reported being sexually active during pregnancy (Figure).

Although <25% of women reported consistently using condoms during pregnancy, counseling by prenatal care providers was associated with marked increases in any condom use and consistent condom use. Healthcare providers, including doctors, nurses, and other providers in various settings (e.g., prenatal care visits, WIC program visits), can play an important role in prevention of sexual transmission of Zika virus infection by counseling pregnant patients on the importance of consistent and correct condom use. These findings can be used to target and further refine Zika virus prevention messaging and interventions and can apply more broadly to the prevention of other sexually transmitted infections during pregnancy, such as syphilis and genital herpes that, if left untreated, can increase the risk for adverse maternal and infant outcomes (8,9).

This study also shows how more traditional surveillance systems focused on maternal and child health can successfully be adapted to rapidly collect information from pregnant women during public health emergencies. Interviewing women after delivery and before hospital discharge, although labor- and cost-intensive, can be implemented rapidly with high response rates during urgent situations, such as the Zika outbreak. This type of design might be appropriate for other public health emergencies that affect the health of pregnant women and newborns when the emergency is geographically limited.

At the time of this study, Ms. Salvesen von Essen was coordinator of the Pregnancy Risk Assessment Monitoring System–Zika Postpartum Emergency Response Study at the Puerto Rico Department of Health, San Juan, PR. She is currently a project coordinator for the Pregnancy Risk Assessment Monitoring System Opioid Activities in the Division of Reproductive Health, National Center for Chronic Disease Prevention and Health Promotion, CDC, Atlanta, GA. Her primary research interest is women’s health.

We thank Tanya Williams and Margaret Honein for providing support during this study.

K.K. was an Oak Ridge Institute for Science and Education Fellow in the Research Participation Program at the Centers for Disease Control and Prevention.