Rotaviruses are a major cause of diarrhea in young children, causing an estimated 215,000 deaths worldwide every year (1). These viruses are nonenveloped and have a genome consisting of 11 segments of double-stranded RNA (2); each segment codes for either 1 of the structural proteins, virus protein (VP) 1–7, or 1 or 2 of the nonstructural proteins (NSPs), NSP1–6. Rotaviruses are classified into species A–I or the tentative species J on the basis of the amino acid sequence similarity of the conserved structural protein VP6 and the conserved nucleotide sequence of the genome segment ends (3–5). For rotavirus A, further classification into genome segment–specific genotypes has been established (6). Rotaviruses can infect a wide diversity of animals, and zoonotic transmission of rotaviruses has been reported (7).

Shrews are small insectivorous mammals that have been previously identified as reservoirs for other pathogens (e.g., hantaviruses and Leptospira spp.) (8–10). In this investigation, we aimed to determine whether common shrews (Sorex araneus, order Eulipotyphla) are also a reservoir for rotaviruses and, if so, assess the genetic variability of the viruses found in this species. 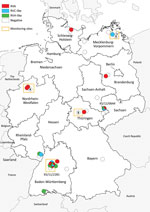 During 2004–2014, small mammals were caught in different regions of Germany as part of local monitoring or pest control measures (9,10). From these animal collections, we acquired samples (intestine contents) collected from 49 common shrews (Figure 1). We combined these samples almost equally into 2 pools and performed RNA extraction followed by next-generation sequencing (NGS) using the Ion Torrent Personal Genome Machine system (ThermoFisher Scientific, https://www.thermofisher.com; Appendix). By applying the RIEMS data analysis pipeline (11), we identified 3 short contigs with low sequence similarities to rotavirus H in both pools. To identify the positive animals, we extracted RNA from individual samples and screened for rotavirus RNA using reverse transcription PCR (RT-PCR) with primers specific to 1 of the 3 rotavirus H contigs we previously obtained (Appendix Table 1). In total, 7 (15.2%) of 46 samples turned out to be positive for species H–like rotavirus (Table 1); 2 samples, KS/12/0644 and KS/11/2281, generated the strongest signal on ethidium bromide staining. We subjected these 2 samples to RNase and DNase treatment followed by RNA extraction and NGS using the NextSeq 500 sequencing system (Illumina, https://www.illumina.com); 8,576,782 read pairs for KS/12/0644 and 6,168,437 for KS/11/2281 were generated. After a RAMBO-K analysis (12) suggested a low abundance of highly deviant rotavirus sequences, we performed data analysis and contig assembly using a newly generated pipeline (Appendix). By this method, contig lengths were 164–3,017 nt, and we obtained 48 contigs with sequence similarities to rotavirus A, 17 with low sequence similarities to rotavirus C, and 23 with low sequence similarities to rotavirus H (Appendix Table 2). Because contigs of homologous genes from each of the 3 viruses were detected in these samples, we concluded 3 different rotaviruses were present in both.

Despite several efforts, we could delineate only partial genomic sequences of rotaviruses from the NGS data. By application of primer ligation, rapid amplification of cDNA ends, and degenerated primer RT-PCR strategies, we acquired the complete open reading frames of VP1, VP6, and NSP5 of most viruses (Table 2). In addition, we reamplified and sequenced the VP6 genes of all viruses by dideoxy chain–termination sequencing and confirmed the VP6 sequences obtained. Sequence analysis of these genes and in silico translation indicated 14.1%–65.6% amino acid sequence similarity to the respective proteins of other rotavirus species (Table 2). The Rotavirus Classification Working Group reviewed the sequences of the shrew rotavirus A genes in sample KS/11/2281 and designated the new genotypes R23 for VP1, I27 for VP6, and H23 for NSP5. The maximum amino acid sequence similarities to established rotavirus type species of 50.1% for VP6 of species C–like rotavirus and 48.2% (species H) or 48.3% (species J) for VP6 of species H–like rotavirus suggest that these viruses should be classified as novel (tentative) rotavirus species (Table 2). 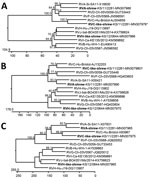 Shrews have been analyzed infrequently for rotaviruses. In 1 study, rotavirus antigen was detected in wild Chinese tree shrews (Tupaia chinensis, order Scandentia) (13), and in another study, species A rotaviruses not identical to those of our study (Appendix Figure 1) were identified in house shrews (Suncus murinus, order Eulipotyphla) from China (14). Here, a broader rotavirus screening of common shrew samples resulted in the identification of novel rotaviruses. The rotavirus detection rate of 10.9%–21.7% in the analyzed samples from animals from different regions of Germany suggests a wide circulation of rotaviruses in shrews, although more samples should be analyzed in the future to clarify the association of rotaviruses with these animals. We also identified co-infections with >1 rotavirus, a regular finding in other animal host species (15).

The shrew rotavirus A sequences showed low similarities with other species A rotaviruses, resulting in the assignment of novel genotypes and suggesting a long-term separate evolution of these viruses in this shrew species. The 2 other rotaviruses identified showed even lower sequence similarities to the known rotavirus species. According to the cutoff value of 53% suggested for the differentiation of rotavirus species on the basis of the encoded VP6 amino acid sequence (5), both viruses should be considered new rotavirus species, which we tentatively designate rotavirus species K (for the rotavirus C–like species) and L (for the rotavirus H–like species). However, because their complete genome sequences have not been determined, a final classification of these viruses remains to be accomplished. At least the 5′ and 3′ termini of these rotavirus genome segments, which are conserved within known rotavirus species (2), should be determined. The low virus amounts in samples, restricted available sample volumes, presence of multiple viruses in single samples, and low sequence similarities for some virus genes might help explain the failure to generate complete genome sequences in our study.

We identified multiple, genetically divergent rotavirus species in common shrews in Germany. These animals should be further investigated as a potential reservoir for rotaviruses capable of infecting humans.

Dr. Johne is a senior scientist at the German Federal Institute for Risk Assessment, Berlin, Germany. His research interests are the epidemiology, molecular evolution, pathogenesis, and transmission pathways of foodborne viruses.

The excellent technical assistance of Anke Mandelkow and Patrick Zitzow and the generation of Figure 1 by Patrick Wysocki are kindly acknowledged.