Cronobacter sakazakii has been documented as a cause of life-threating infections, predominantly in neonates. We conducted a multicenter study to assess the occurrence of C. sakazakii across Europe and the extent of clonality for outbreak detection. National coordinators representing 24 countries in Europe were requested to submit all human C. sakazakii isolates collected during 2017 to a study center in Austria. Testing at the center included species identification by matrix-assisted laser desorption/ionization time-of-flight mass spectrometry, subtyping by whole-genome sequencing (WGS), and determination of antimicrobial resistance. Eleven countries sent 77 isolates, including 36 isolates from 2017 and 41 historical isolates. Fifty-nine isolates were confirmed as C. sakazakii by WGS, highlighting the challenge of correctly identifying Cronobacter spp. WGS-based typing revealed high strain diversity, indicating absence of multinational outbreaks in 2017, but identified 4 previously unpublished historical outbreaks. WGS is the recommended method for accurate identification, typing, and detection of this pathogen.

Most reported cases of illness caused by C. sakazakii are in infants <2 months old (6,7). Premature infants and infants with underlying medical conditions are at the greatest risk for illness. Numerous outbreaks caused by C. sakazakii have been traced to contaminated powdered infant formula (8). Powdered infant formula is not a sterile product, and the ability of C. sakazakii to tolerate dry conditions enables it to survive for long periods in the final powdered product (9).

The screening of food (particularly powdered formula) was proposed to reduce the risk to neonatal and infant health (10,11). The most common syndromes of foodborne infection in infants include necrotizing enterocolitis (NEC), bacteremia, and meningitis (12,13). Examples of outbreaks of illness in hospital neonatal units caused by C. sakazakii associated with powdered infant formula have been compiled by Iversen and Forsythe (6) and by Lund (8).

A few cases of illness (usually nongastrointestinal) in adults caused by C. sakazakii have been reported. In most of these cases the adults had underlying diseases, and no evidence of foodborne transmission was reported (14,15). 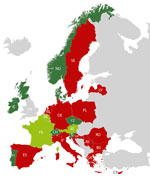 Figure 1. Countries participating in a multicenter study of Cronobacter sakazakii infections in humans, Europe, 2017. Dark green indicates the 8 countries that sent C. sakazakii isolates to the study center in Austria;...

We cultured isolates on Columbia blood agar plates (bioMérieux, https://www.biomerieux.com/) overnight at 37°C. We performed species identification by using MALDI-TOF Biotyper (Bruker, https://www.bruker.com) and MBT Compass IVD 4.1.60 (Bruker) according to the manufacturer’s instructions. We conducted isolation, quantification, and WGS of genomic DNA according to methods described by Lepuschitz et al. (16). We used Sequencing Coverage Calculator (https://www.illumina.com) for calculation of a desired mean coverage of >80-fold.

MALDI-TOF MS analysis in the study center identified 69 of 77 isolates as C. sakazakii; 1 isolate from 2017 yielded low-confidence identification (log[score] value 1.70–1.99). We assigned 7 clinical isolates from 2017 and 1 historical clinical isolate from 2005 to other species (Table 1). The WGS-based species identification using JSpeciesWS and rMLST confirmed MALDI-TOF MS identification results in all but 10 of the 69 isolates. WGS indicated that 5 isolates were C. malonaticus, 2 were C. turicensis, 1 was C. dublinensis, 1 was C. universalis, and 1 was Siccibacter turicensis (Table 1; Appendix Table 1).

In total, 21 C. sakazakii isolates from 21 patients were collected in 2017 in 9 participating countries in Europe. Case-fatality ratio (within 30 days after specimen collection) was 2 of 21 case-patients (Table 2).

Figure 2. Minimum-spanning tree of 59 Cronobacter sakazakii isolates, including 21 human isolates from 2017 and 38 historical human isolates, from 11 countries in Europe. Each circle represents isolates with an allelic profile...

Core genome comparison of 59 C. sakazakii isolates and the 3 reference strains revealed an average allelic difference of 2,402 and a maximum allelic difference of 2,724 (Figure 2). Isolates clustered in the minimum-spanning tree to their respective MLST. Eight isolates belonging to ST1 included 2 stool isolates from neonates with a common epidemiologic link in Austria in 2009; these 8 isolates showed 1 allelic difference and were most closely related (203 alleles difference) to reference ATCC BAA-894, an isolate collected from powdered formula in the United States in 2001. That outbreak affected 2 neonates with necrotizing enterocolitis (both male, age 10 days and 12 days) hospitalized in the same neonatal intensive care unit.

Twelve isolates belonged to ST4, of which 3 were confirmed isolates from infants. Two infant isolates belonged to an outbreak cluster with a common epidemiologic link detected in Austria in 2016; these isolates shared the same cgMLST profile and showed a maximum of 47 allelic differences to the historical reference strain NCTC 8155 (from milk, United Kingdom, 1950). This outbreak again affected 2 neonates (neonate A: female, age 22 days, positive blood culture, fatal outcome; neonate B: male, age 16 days, positive respiratory tract specimen) hospitalized in the neonatal intensive care unit of another hospital in Austria. The third infant isolate was a 2017 ST4 isolate from a case in Austria with a fatal outcome and was most closely related (302 allelic differences) to a historical strain from Denmark isolated in 2003.

All 10 isolates assigned to ST155 belonged to a historical outbreak among infants in Belgium during 1997–1998; the isolates originated from blood cultures (n = 2), stool specimens (n = 2), rectal swab specimens (n = 4), and respiratory tract specimens (n = 2). The first positive sample was collected in November 1997; the remaining 9 specimens were obtained during August–September 1998. Eight of the 10 isolates shared the same cgMLST profile, and 2 had 1 allelic difference.

In Vitro and In Silico Antimicrobial Resistance Analysis

In vitro susceptibility testing of 21 human C. sakazakii isolates from 2017 revealed 20 C. sakazakii isolates that were susceptible to all 14 tested antibiotics (Appendix Table 2). One isolate was resistant to ampicillin, cefotaxime, gentamicin (intermediate), moxifloxacin, and trimethoprim/sulfamethoxazole.

The aim of our 2017 C. sakazakii study was to assess the occurrence of this opportunistic pathogen in countries of Europe, characterize the isolates, and recognize possible multinational outbreaks. Our finding that only 59 of 77 presumptive C. sakazakii isolates had the species-identification C. sakazakii confirmed at the central study center shows that correct identification of Cronobacter spp. is still a challenge for many routine laboratories.

The prevalence of reported C. sakazakii cases was low, with only 11 (45.8%) of 24 participating countries submitting C. sakazakii isolates. Clinical isolates from 2017 showed high genetic diversity, indicating that neither multinational nor national outbreaks occurred in 2017 in the 24 countries studied. However, characterization of the historical isolates obtained during this study confirmed occurrence of 4 previously unpublished historical outbreaks: 2 outbreaks from 2009 and 2016 in Austria, 1 from Belgium during 1997–1998, and 1 from France during 2010–2016. Hospitals affected by nosocomial C. sakazakii outbreaks might still be reluctant to publish possibly food-related outbreaks or nosocomial infections, especially in the case of affected infants and particularly in the case of related fatalities.

The dominant STs found among our clinical C. sakazakii isolates from 2017 were ST4, ST17, ST1, and ST40, a distribution consistent with results from other studies (1). The medical literature often links C. sakazakii ST4 with powdered infant formula–associated outbreaks in infants (3). In our study, the sole strain (7750-17) affecting an infant (a 3-month-old baby boy who died) was ST4, isolated from a blood culture.

Antibiotic treatment is essential in the care of a patient with a confirmed Cronobacter infection. The traditional antibiotic regimen for Cronobacter spp. was ampicillin in combination with either gentamicin or chloramphenicol. In view of claimed resistance to ampicillin and most first- and second-generation cephalosporins, it has been suggested that carbapenems or third-generation cephalosporins be used with an aminoglycoside or trimethoprim/sulfamethoxazole (24). In our study, antimicrobial resistance testing showed susceptibility to all tested antibiotics for 20 of 21 human isolates from 2017. In comparison to other members of the family Enterobacteriaceae, Cronobacter strains seem to be more susceptible against so-called “key access antibiotics” of the World Health Organization’s Model List of Essential Medicines (25), such as ampicillin, aminoglycosides, chloramphenicol, and third-generation cephalosporins (the last is included in the List of Essential Medicines only for specific, limited indications) (26). For all isolates, we confirmed the presence of 1 of 4 tested ampC β-lactamase variants, which confer phenotypic resistance exclusively to first-generation cephalosporins (e.g., cephalothin) but not to ampicillin (23). A few studies have reported Cronobacter isolates conferring multidrug resistance (26), a phenomenon observed in our study only for 1 strain from Slovenia.

Adults were the main affected age group in our study. All but 2 of the isolates from 2017 originated from adults. This finding confirms the results from previous recent studies (14,30) and contradicts statements in numerous medical textbooks, postulating that infants are more often affected than adults (8,31–33).

Our study has some limitations. Lack of information (e.g., detailed epidemiologic and clinical patient data) and misidentification on genus and species levels might have played a role in underestimating the real prevalence rate; 13 of the 24 participating countries did not find or did not submit C. sakazakii isolates.

In conclusion, this C. sakazakii study in Europe revealed a high strain diversity, which points to highly diverse infection sources and an absence of national or multinational outbreaks in 2017. Correct identification of C. sakazakii still poses a diagnostic challenge to many laboratories, and the use of such imperfect detection systems might explain the low prevalence of reported clinical C. sakazakii isolates found in this study. WGS data must be used for accurate species identification and high-resolution strain typing. We recommend the inclusion of C. sakazakii as a notifiable organism by public health authorities.

Ms. Lepuschitz studied molecular biology with a focus on molecular medicine and is currently a PhD student focusing on infectious diseases at the Vienna University of Technology and the Austrian Agency for Health and Food Safety, Vienna, Austria. Her primary research interests include the characterization and epidemiology of clinical, foodborne, and environmental pathogens.

This study was initiated and partially funded by ESCMID Food- and Water-borne Infections Study Group.

The authors have no conflict of interests to declare.

The institutional review board of the city of Vienna studied the protocol and decided on July 28, 2016, under EK 16-161-VK-NZ that the study did not require formal ethics review.

1Members of the EUCRONI study group are listed at the end of this article.