Using metagenomic analysis, we identified a novel picornavirus in young preweaned lambs with neurologic signs associated with severe nonsuppurative encephalitis and sensory ganglionitis in 2016 and 2017 in the United Kingdom. In situ hybridization demonstrated intralesional neuronotropism of this virus, which was also detected in archived samples of similarly affected lambs (1998–2014). 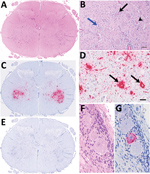 Figure 1. Histologic and in situ hybridization findings in cervical segment 7 of the spinal cord of 3-week-old lamb in Scotland in study of picornavirus in lambs with severe encephalomyelitis. A) Tranverse segmental...

In 2016 in Scotland, and in 2017 in Wales, progressive neurologic signs were observed in young lambs. These cases were associated with nonsuppurative encephalomyelitis predominantly involving gray matter, including neuronal necrosis/neuronophagia and ganglionitis consistent with lesions caused by a neuronotropic viral infection. The target sites included cerebellar roof nuclei in the Purkinje molecular layer of the cerebellum, caudal brainstem nuclei (red nuclei and vestibular complex), and all levels of spinal cord examined (cervical, thoracic, and lumbar segments) located mainly in the ventral horns and dorsal root ganglia (Figure 1, panels A, B). Severe lesions were found consistently in the spinal cord. Louping ill virus, a common etiologic agent of nonsuppurative encephalitis in ruminants in Great Britain, was ruled out on the basis of the clinicopathological presentations and neuropathology, as well as serology. The observed lesion distribution and age of affected sheep were inconsistent with other possible neurotropic viral infections, such as Borna disease virus (1).

In 2016, we subjected a sample from an affected lamb’s cerebrum to metagenomic analysis (Appendix) with read classification using RIEMS (2). From the resulting dataset (2 million reads), 99.97% were classified, but only 1 read was reliably classified as a viral sequence. This 326-bp read showed the highest sequence identity with the 5′ untranslated region (UTR) of the genome of human rhinovirus (81.3%), belonging to the family Picornaviridae, genus Enterovirus. For further validation and sample screening, this viral read was used to design a quantitative reverse transcription PCR (qRT-PCR) assay (Appendix). Using this qRT-PCR, we analyzed lambs that, in 2017, received diagnoses of nonsuppurative encephalomyelitis and ganglionitis typical of neuronotropic viral infection; all 3 animals tested positive (Table 1). We detected the highest viral loads in the cerebellum and spinal cord (PCR quantification cycle [Cq] 18–21), where the most severe lesions were also observed. We detected lower loads in the cerebrum (Cq 30), ileum (Cq 29–32), tonsil (Cq 32–36), and mesenteric lymph node (Cq 34–36). Lung and spleen samples were negative, as were CNS samples from 2 additional lambs from the Scotland flock with compressive spinal cord lesions and no evidence of nonsuppurative encephalitis (Table 1).

We subjected spinal cord samples from selected lambs affected in the 2017 lambing season to metagenomic analysis (Appendix), which yielded datasets with 2.4 million reads each. RIEMS analysis classified 99.9% of the reads, with 900 and 406 reads as sequences related to Picornaviridae (genera Enterovirus and Sapelovirus), and several unclassified species with relatively low sequence identities (64.8%–96.8%). Several reads were classified only after translation into amino acid sequences and comparison to the protein database. We found no evidence of other pathogens that could have resulted in the neuropathological manifestations.

Figure 2. Phylogenetic relation of ovine picornavirus to other picornaviruses of the genera Sapelovirus, Rabovirus, and Enterovirus, as well as unclassified picornaviruses. The maximum-likelihood phylogenetic tree is based on complete coding sequences and...

De novo assembly of reads related to Picornaviridae generated a complete genome of a novel virus, tentatively named ovine picornavirus (OvPV). The obtained 7.5 kb OvPV genome is only very distantly related to known picornaviruses, with nucleotide sequence identities of 59% with a bovine picornavirus (International Nucleotide Sequence Data Collaboration [INSDC] accession no. LC006971) (3) and 55% with a canine picornavirus (accession no. KU871312) (4). The OvPV genome comprises a 5′ UTR, a predicted 6,885-nt open reading frame encoding the polyprotein with 2,294 aa, a 3′ UTR, and a poly(A)-tail. The putative structure of the polyprotein is similar to sapeloviruses with the characteristic order 5′-L-1ABCD-2ABC-3ABCD-3′; 3 consecutive methionins in frame could act as start codons of the polyprotein. The translation initiation site is proposed to be the third, because it is contained in the best Kozak context (5). Pairwise amino acid identities with P1, P2, and P3 of related picornaviruses are <58% (Appendix Table). Within the family Picornaviridae, together with other unclassified viruses (4,6), OvPV forms a putative new genus that is closest related to the genera Sapelovirus, Rabovirus, and Enterovirus (Figure 2; Appendix Figure). All whole-genome sequences we identified are available from the INSDC databases (accession no. PRJEB28719).

We attempted virus propagation from selected samples of affected animals on various mammalian cell lines (Appendix); however, virus could not be isolated. This result is consistent with other described unsuccessful attempts of viral propagation of related picornaviruses in cell culture (4,7).

To investigate whether the newly detected virus emerged in 2016 or was present previously, we examined archived cases from sheep in England with nonsuppurative encephalomyelitis oriented on gray matter that had tested negative for Louping ill virus by immunohistochemistry. Although the impaired RNA extracted from formalin-fixed paraffin-embedded (FFPE) material proved to be challenging for sequencing and amplification, we identified several additional cases of OvPV infection using reverse transcription PCR, and we generated whole-genome sequences from selected cases (Table 2). We detected OvPV in lambs of different breeds <3–4 weeks of age with neurologic signs; the earliest case identified dated back to 1998 (Table 2). Compared with the 2017 cases in Wales, the full OvPV genomes of the archive cases had ≈90%–96% sequence identity at the nucleotide level but up to 99% sequence identity at the amino acid level.

Complete clinical data were not available for all of the archived cases; however, information was available for 5 flocks. In 4 of these flocks, the affected lambs were being fed artificially, usually because of maternal death or insufficient colostrum. Therefore, insufficient colostral antibody intake may predispose to development of neurologic disease similar to that proposed for porcine teschovirus, but this remains unproven. On the basis of the finding that OvPV has already been present in Wales, Scotland, and England for >20 years, we suspect that OvPV could be present in the intestinal tract commonly, similar to porcine teschovirus and porcine sapelovirus (8,9), but only occasionally causing disease in neonatal and early juvenile lambs.

In this study, we report identification of a novel neuroinvasive picornavirus associated with severe nonsuppurative encephalomyelitis and sensory ganglionitis in sheep. The virus has been associated with encephalomyelitis for >20 years, affecting sheep in Scotland, Wales, and England in a range of sheep breeds and management systems, but solely young lambs to date. These findings could suggest that OvPV infection is usually subclinical and self-limiting, particularly in older animals. For some cases, particularly those involving multiple affected lambs in a single flock over 1 lambing season, the clinical histories of snatching at birth or artificial feeding of orphan or pet lambs indicated likely failure of transfer of colostral antibodies. The resulting colostrum deficiency may have acted as a predisposing factor. Further research is needed to determine geographic distribution, disease burden, transmission route, and other factors; a serologic assay is also needed to further analyze the distribution in the field. However, OvPV should be considered in the differential diagnosis of ovine nonsuppurative encephalomyelitis oriented on gray matter, particularly in young lambs with sensory ganglionitis.

Ms. Forth is a biochemist and PhD student at the Friedrich-Loeffler-Institut, Greifswald-Insel Riems, Germany. Her research interests include novel and emerging viruses, metagenomics, and high-throughput sequencing.

This work was supported by the German Federal Ministry of Education and Research within the project DetektiVir (grant no. 13N13783). SRUC Veterinary Services is funded in part by the Scottish Government’s Veterinary Services Programme. The Animal and Plant Health Agency (APHA) Livestock Disease Surveillance System is funded by the UK Department for Environment, Food, and Rural Affairs.