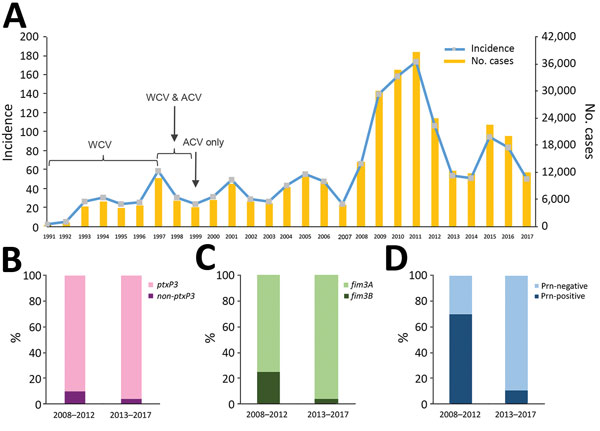 Figure 1. Pertussis trends and temporal changes of allele frequencies of vaccine antigens genes, Australia. A) Pertussis notifications in Australia, 1991–2017. Source: National Notifiable Diseases Surveillance System (http://www9.health.gov.au/cda/source/cda-index.cfm). Incidence is number of cases per 100,000 population. Reporting system was established in 1991. ACV was first introduced in Australia in 1997, and WCV was replaced with ACV in 1999. A large pertussis epidemic occurred during 2008–2012, and another epidemic occurred during 2013–2017. B) Percentage of Bordetella pertussis isolates carrying ptxP3 allele in the 2 epidemic periods. C) Percentage of B. pertussis isolates carrying fim3A and fim3B allele in the 2 epidemic periods. D) Percentage of pertactin-expressing (Prn-positive) and pertactin-deficient (Prn-negative) B. pertussis isolates in the 2 epidemic periods. ACV, acellular vaccine; Prn, pertactin; WCV, whole-cell vaccine.