Endemic scrub typhus was recently detected on Chiloé Island in southern Chile. We report a series of cases, acquired over a wide geographical range in continental Chile during 2016–2018, demonstrating that this emerging rickettsial infection is also found on the mainland of South America.

Scrub typhus is a vectorborne zoonosis caused by Orientia spp. bacteria; infection carries a potentially severe outcome (1). Although widely underrecognized, scrub typhus is considered one of the most important rickettsial infections worldwide in terms of prevalence and severity (2). Until recently, scrub typhus was associated with only a single species, O. tsutsugamushi, which is transmitted by larvae of trombiculid mites (chiggers) and threatens >1 billion human inhabitants within the so-called tsutsugamushi triangle in the Asia–Pacific region (1). Since 2006, the discoveries of scrub typhus in 4 patients on Chiloé Island in Chile (3,4) and in 1 patient from Dubai, United Arab Emirates (5), have suggested the emergence of the disease farther afield (6). This change of paradigm has been reinforced by recent studies mainly from Africa (7). The emergence of endemic scrub typhus on Chiloé Island has been confirmed by ongoing studies of our working group in Chile (8,9). Whether this disease is only endemic to Chiloé Island or has a wider distribution is unknown. We report 9 patients who had scrub typhus diagnosed after visiting different regions of continental Chile during 2016–2018.

After the confirmation of autochthonous scrub typhus cases in Chiloé in 2016 (4), the Chilean Ministry of Health issued a clinical alert advising healthcare providers in Chile to confirm possible cases in cooperation with our research group. Most of the patients described in this report were identified as a result of the clinical alert and are included in an ongoing clinical–epidemiologic scrub typhus project.

Among the 37 patients with suspected scrub typhus who were tested during 2016–2018, 13 were from mainland Chile. Of those, 9 had scrub typhus diagnosed both serologically and molecularly. None of these 9 patients lived in or traveled to Chiloé Island or other regions with endemic scrub typhus, but all were exposed to natural habitats on mainland Chile (Table 1). Seven patients were male and 2 female; median age was 28 years. 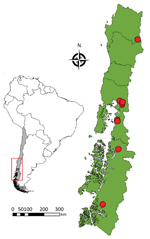 All cases occurred after outdoor activities during the summer months of February and March. We defined probable exposure sites as those locations where patients reported outdoor activities with close contact to natural environments within the 7–20 days before symptom onset. Most infections were acquired in the Los Lagos Region, which includes Chiloé Island. However, 2 cases were acquired farther south, in the Aysén Region, and another case farther north, in the Bio Bío Region (Figure). The sites of exposure ranged over a total distance of >1,120 km (https://ec.europa.eu/programmes/erasmus-plus/resources/distance-calculator_en), from 38°03′S to 47°47′S. Details of the activities leading to the exposure have been described elsewhere (12).

All patients had fever, generalized maculopapular rash, eschar, and headache; other frequent symptoms were myalgia (8 patients) and regional lymphadenopathy (5 patients). Laboratory abnormalities included elevated C-reactive protein (8 patients) and transaminases (6 patients), thrombocytopenia (4 patients), and leukopenia (4 patients). Eight patients required hospitalization. We noted a serologic response to O. tsutsugamushi antigens in all 9 patients. Eight patients were positive for IgG by indirect immunofluorescence assay, mostly with low titers, and 3 of the 6 patients for whom convalescent-phase samples were available showed seroconversion or a >4-fold rise in titer. IgG and IgM results by ELISA were positive in 6 of 9 patients on the basis of local cutoff values (Table 2). All cases were confirmed by detection of Orientia-specific DNA from eschar material using 3 different PCR assays (Table 2). After treatment with doxycycline (7 patients) or azithromycin (1 patient), patients recovered rapidly; 1 patient recuperated after 6 days of fever without receiving any scrub typhus–specific treatment.

Our understanding of the global epidemiology of Orientia spp. as human pathogens has undergone important changes. Most importantly, the paradigm of the geographic limitation of scrub typhus to the Asia–Pacific region, which had been unchallenged since the first scientific description of this disease at the beginning of the last century, has been superseded in light of the recent identification of scrub typhus cases on the Arabian Peninsula (Dubai) and South America (Chiloé Island in Chile) (4,5). The Dubai patient was infected by a distinct Orientia species, Candidatus O. chuto; the complete description of the isolates from Chile is pending.

Further studies in rodents and vectors have demonstrated molecular evidence of Orientia spp. or Orientia-like organisms in South Africa, Kenya, Senegal, and France (6,13,14). In addition, serologic reports point to possible human exposure to Orientia microorganisms in Djibouti, Kenya, Republic of the Congo, Cameroon, and Peru (6,7,15). Current data suggest that Candidatus O. chuto might be the Orientia species from Africa and the Arabian Peninsula (5,14). Clinical data from these regions are scarce, but 1 molecularly proven case and 2 cases diagnosed on the basis of serologic results occurred in patients with typical symptoms of scrub typhus (5,6).

The case series we report provides important epidemiologic information for South America, highlighting that scrub typhus is not limited to Chiloé Island but also occurs over a wide range of continental Chile. The actual incidence of the infection remains unknown; the observed increase from 1 case in 2016 to 6 cases in 2018 most probably reflects the growing awareness of scrub typhus among infectious diseases physicians in Chile. Because all of the case-patients we describe were included through a surveillance based on passive case detection, we believe that they only represent the tip of the iceberg for scrub typhus in Chile and South America.

The clinical data of this series showed the classical scrub typhus manifestation: fever, generalized maculopapular rash, and eschar at the inoculation site. However, this finding has to be interpreted cautiously because our epidemiologic alert describes these manifestations as typical, which biases the physicians’ attention toward these presentations. Less typical clinical signs and symptoms (e.g., without rash or with predominant respiratory symptoms), which are present in Asia in a relevant percentage of cases (1), might go undiagnosed in Chile.

All patients were serologically positive according to >1 of the applied commercial assays, which were based on O. tsutsugamushi antigens. The low seroreactivity against these antigens, however, suggests a distinct strain or species, which is supported by our preliminary molecular analyses (data not shown). Eschar material, which can be stored and transported under simple conditions (i.e., in a dry plastic tube at 4°C), proved to be the best and most practical specimen, permitting a rapid and reliable confirmation by molecular methods. Studies are ongoing to culture the Orientia species in Chile and to understand its life cycle, including vectors and possible zoonotic reservoirs.

Dr. Weitzel is a clinical microbiologist and infectious diseases physician specializing in tropical and travel medicine at Clínica Alemana and a professor at the Clínica Alemana Medical School of the Universidad del Desarrollo in Santiago, Chile. His main research interests include vectorborne zoonoses and imported tropical infections.

This work was supported by the Fondo Nacional de Desarrollo Científico y Tecnológico (FONDECYT grant no. 1170810) and the Global Emerging Infectious Diseases Section (work unit no. A1402).

The views expressed in this article are those of the authors and do not necessarily reflect the official policy or position of the Department of the Navy, Department of Defense nor the U.S. Government. A.L.R. is an employee of the US Government. This work was prepared as a part of his official duties. Title 17 U.S.C. §105 provides that “copyright protection under this title is not available for any work of the United States Government.” Title 17 U.S.C. §101 defines a US Government work as a work prepared by a military service member or employee of the US Government as part of that person’s official duties. J.J. and A.L.R. provided training and consultation, but did not have contact with patients or participate in the data collection at Naval Medical Research Center, USA.

1Preliminary results from this study were presented at the 67th Annual Meeting of the American Society of Tropical Medicine and Hygiene, October 28–November 2, 2018, New Orleans, Louisiana, USA.