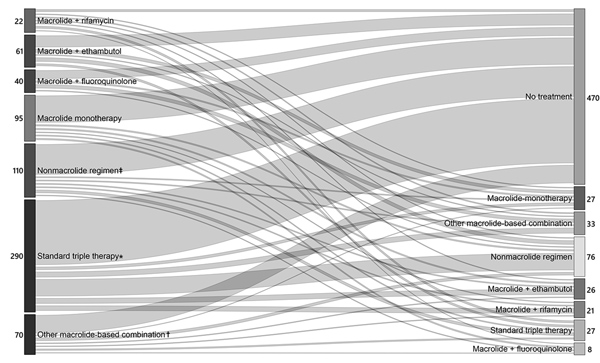 Figure. Flow of therapy for 688 patients with Mycobacterium avium complex pulmonary disease, depicting transition between first and second regimens during first 18 months of treatment, Ontario, Canada, 2001–2013. Values are the number of patients receiving each treatment regimen in each epoch of therapy. An epoch is defined as >60 days of the therapy. The width of the lines is proportional to the number of patients receiving and transitioning between each regimen. Mean (± SD) duration of treatment, in days, for each starting regimen is as follows: standard triple therapy 315 (± 167), other macrolide containing combination 331 (± 157), macrolide-ethambutol 274 (± 172), macrolide monotherapy 230 (±167), nonmacrolide containing regimen 176 (± 178), macrolide-fluoroquinolone 216 (± 147), macrolide-rifamycin 197 (± 139). *Macrolide, ethambutol, and a rifamycin, ± other drugs; †macrolide + >2 additional drugs (other than standard triple therapy); ‡ethambutol, a rifamycin, or fluoroquinolone, either alone or in combination.