In a multicenter study, we determined a prevalence rate of 4% for azole-resistant Aspergillus fumigatus in Taiwan. Resistance emerged mainly from the environment (TR34/L98H, TR34/L98H/S297T/F495I, and TR46/Y121F/T289A mutations) but occasionally during azole treatment. A high mortality rate observed for azole-resistant aspergillosis necessitates diagnostic stewardship in healthcare and antifungal stewardship in the environment.

Worldwide emergence of azole-resistant Aspergillus fumigatus since the late 2000s threatens human health (1). Azole resistance in A. fumigatus might develop during patient therapy with medical azoles or through exposure to azole fungicides in the environment; environmental exposure predominantly involves TR34/L98H and TR46/Y121F/T289A mutations in cyp51A (1).

Taiwan is an island country in eastern Asia that is geographically separated from mainland Eurasia and has a long history of azole fungicide use. To delineate the influence of clinical and environmental use of azoles on resistance, we conducted a multicenter study that investigated 375 A. fumigatus sensu stricto isolates collected during August 2011–March 2018 from 297 patients at 11 hospitals in Taiwan (Appendix Table 1, Figure 1). 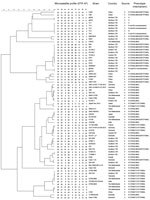 Phylogenetic analysis showed that TR34/L98H/S297T/F495I isolates from 2 patients with pulmonary aspergillosis (isolates B44 and B51 in 2012, isolates E071, E073, and E074 in 2015) (Figure) belonged to a local microsatellite genotype widely distributed in the environment of Taiwan (3), indicating that this clone has locally evolved and adapted to the environment. The TR34/L98H isolates were genetically clustered with local environmental isolates or clinical isolates from China and Europe (Appendix Table 4). The TR46/Y121F/T289A isolate (S05–322) recovered in 2018, which colonized a patient without overseas travel, was genetically identical to a clone prevalent in the Netherlands and Tanzania (6), raising the concern of the intercountry transfer of resistant isolates.

In Taiwan, the annual consumption of difenoconazole and tebuconazole has exceeded that of prochloraz since 2012 (Appendix Figure 3), further creating a favorable environment for maintenance and spread of TR34/L98H, TR34/L98H/S297T/F495I, and TR46/Y121F/T289A isolates. Thus, the One Health approach to implement environmental antifungal stewardship is warranted to minimize ongoing resistance selection in the fields.

Overexpression of cdr1B (a drug efflux transporter) and an S269P mutation in hmg1 (a hydroxymethylglutaryl-CoA reductase) were identified in 4 resistant isolates but not in the initial susceptible isolate (Appendix Table 5, Figure 4), suggesting their roles involved in azole resistance (4,9). Another 2 pan–azole-resistant respiratory isolates were recovered from a patient (no. 12) who had pulmonary aspergillosis and was receiving voriconazole for 4 months. Azole-susceptible and azole-resistant isolates co-existed in this patient, which echoes the international recommendation suggesting testing multiple colonies (>5) from a single culture (1). Cyp51A overexpression and an F262 deletion in hmg1(hmg1F262_del) were identified in these 2 resistant isolates. Although hmg1F261_del was recently reported in azole-resistant A. fumigatus from a voriconazole-exposed patient (4), whether cyp51A overexpression and hmg1F262_del act synergistically to cause resistance warrants further studies.

Finally, reduced colony sizes were observed in all 6 azole-resistant A. fumigatus isolates with wild-type cyp51A (Appendix Figure 2). Thus, attention should be paid to select colonies of various sizes for susceptibility testing from patients with azole exposure.

1Results from this study were presented in part at the 30th International Congress of Chemotherapy and Infection, November 24–27, 2017, Taipei, Taiwan.