In 2018, we detected a novel Ehrlichia strain infecting Amblyomma neumanni ticks in Argentina. The novel strain is phylogenetically related to the ruminant pathogen E. ruminantium and represents a potential risk for veterinary and public health because A. neumanni ticks parasitize domestic and wild ruminants and bite humans.

Ehrlichia spp. are intracellular gram-negative bacteria relevant to human and animal health; they infect monocytes, neutrophils, or endothelial cells, depending on the species involved (1). The genus Ehrlichia (Rickettsiales: Anaplasmataceae) comprises 6 formally recognized tick-transmitted species: E. canis, E. muris, E. chaffeensis, E. ewingii, E. minasensis, and E. ruminantium (2,3). Recently, other Ehrlichia species have been reported and diﬀerent strains of putative novel Ehrlichia species have been molecularly detected, but their taxonomic positions are still not clearly defined (4–6). Current knowledge about this group of pathogens suggests that a large number of Ehrlichia species might be not yet described.

Amblyomma neumanni ticks are relevant to human and veterinary medicine because in all stages they commonly parasitize wild and domestic ruminants and other large mammals, including humans (7). Moreover, A. neumanni ticks can reportedly be infected with Rickettsia bellii and Rickettsia amblyommatis and are potential vectors of the cattle pathogen Anaplasma marginale (7). To determine the presence of tickborne bacteria of the genus Ehrlichia in questing A. neumanni ticks in northwestern Argentina, we performed phylogenetic analyses on Anaplasmataceae-positive tick DNA samples. All procedures were approved by the Ethics and Biosafety Committee of the Facultad de Ciencias Veterinarias, Universidad Nacional del Litoral, Esperanza, Argentina.

During May 2018 (late autumn), we collected free-living ticks by dragging and by using dry ice-baited traps in Dean Funes (30°22′S, 64°21′W) and San José de la Dormida (30°21′S, 63°58′W), Córdoba Province, Argentina. Both sites are located in the Chaco Seco ecoregion. We identified all ticks by using standard taxonomic keys (7) and individually processed them for DNA extraction by using a boiling method (8). We screened DNA extracts for Anaplasmataceae by real-time PCR targeting the 16S rRNA gene, as previously described (9). We further tested samples positive for Anaplasmataceae by amplification of Ehrlichia genes dsb and groESL, as described elsewhere (5). We sequenced all amplicons and performed phylogenetic analyses with the maximum-likelihood method. 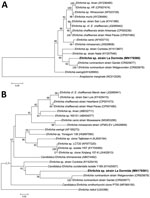 Ehrlichia sp. strain La Dormida, associated with A. neumanni ticks, circulates in rural areas of northwestern Argentina. In our phylogenetic analyses, Ehrlichia sp. strain La Dormida genotype was unique and well separated from all other available ehrlichial sequences, suggesting that it could represent a distinct species yet to be properly characterized. In addition, these analyses positioned Ehrlichia sp. strain La Dormida in a separate group together with E. ruminantium. The species E. ruminantium is native to the Africa continent, where it is the etiologic agent of heartwater, a tickborne disease of major economic relevance with regard to domestic ruminants throughout sub-Saharan Africa (10). Besides E. ruminantium, the only other species of Ehrlichia known to naturally infect and cause clinical manifestations of ehrlichiosis in cattle is E. minasensis (3). However, E. minasensis is phylogenetically distant from E. ruminantium and closely related to E. canis genotypes (3).

We report A. neumanni ticks as a potential vector of Ehrlichia sp. strain La Dormida. Because it is assumed that bacteria of the genus Ehrlichia are not transmitted transovarially in ticks (1), infection with Ehrlichia must be acquired during feeding of immature ticks, which then pass the infection to adults by transstadial transmission. Regarding E. ruminantium, wild African ruminants are reservoirs of the bacteria (10). The novel Ehrlichia sp. strain La Dormida is phylogenetically related to the ruminant pathogen E. ruminantium and represents a potential risk for veterinary and public health because A. neumanni ticks parasitize domestic and wild ruminants and bite humans.

Dr. Fargnoli is a postdoctoral student at the Instituto de Ciencias Veterinarias del Litoral in Esperanza, Santa Fe, Argentina. Her research interests focus on the ecology of tickborne diseases.

We thank Federico Ruiz and Anibal Gomez for their support with field work and Federico Prandi.