We report a case of Babesia crassa–like infection in an asplenic patient in Slovenia in 2014. We diagnosed the infection using microscopy, 18S rRNA sequencing, and serology and monitored parasitemia using digital PCR. With its increasing occurrence, babesiosis should be included in differential diagnoses for immunocompromised patients displaying fever.

Babesia infections occur worldwide and cause disease mainly in animals, but disease occurs occasionally in humans. Infections in humans are mostly attributable to B. microti, B. duncani, and Babesia sp. MO1 in North America; B. divergens, B. venatorum, and B. microti in Europe; and B. venatorum, B. crassa–like parasite, B. microti, Babesia sp. XXB/HangZhou, and Babesia sp. KO-1 in Asia (1,2). Transmission occurs predominantly through tick bites, but humans have acquired infections via contaminated blood products and through the transplacental and perinatal routes (1). Most patients with Babesia infections in Europe were reported to be asplenic or immunocompromised. Typical clinical signs and symptoms include fever (up to 40°C), parasitemia (20%–80%), severe anemia, muscle weakness, fatigue, and late-onset jaundice with dark urine, and sometimes complications develop. Long-term clinical follow-up that includes blood smear examination and PCR analysis is necessary because relapse and persistence of parasitemia can occur in spite of treatment. The application of novel molecular methods has revealed that the host range of many Babesia species is less restricted than previously thought. New species or animal pathogens are increasingly being discovered as causing Babesia infections in humans. We report a B. crassa–like infection in a patient in Slovenia in 2014.

In 2014, a 55-year-old woman, living on the outskirts of Murska Sobota, Slovenia, sought medical treatment for a 6-day history of intermittent fever up to 39°C, myalgia, headache, poor appetite concomitant with weight loss, fatigue, sweating, and dark urine. She previously had a splenectomy and partial pancreatectomy 5 years previous because of cystic adenoma and adrenal incidentaloma without hormonal activity. She reported no history of travel, tick bite, animal contact, or blood transfusions. 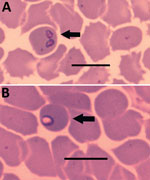 We gave the patient an oral treatment of clindamycin (600 mg 3×/d) and quinine (600 mg 3×/d). Three days later, the patient was normothermic, and after a total of 6 days, she was discharged from the hospital with platelet levels within the reference range (150–350 × 109/L). She continued the dual therapy for 14 days. To follow up on the patient’s response to treatment, we measured parasitemia levels by blood smear microscopy, PCR (3), and digital PCR (Appendix).

We later confirmed the infection by serology using an indirect immunofluorescence assay specific to another member of the large Babesia group, B. divergens (MegaFLUO BABESIA divergens; Megacor, https://www.megacor.at). Antibodies were cross-reactive, and results demonstrated a 4-fold increase in IgG titer (Appendix Table).

Reports of babesiosis in humans are increasing with the increase in number of immunocompromised persons; a species previously known only as an animal pathogen is posing a greater threat to those with weakened immune systems. B. crassa has been detected in sheep in Iran (4), goats and ticks in Turkey (5,6), and ticks in Hungary (7), and a case series of infections with B. crassa–like parasite in humans, sheep, and ticks was reported in northeastern China (8).

We report an infection of B. crassa–like parasite in an asplenic person in Europe that was confirmed by blood smear examination, PCR, sequencing, and serology (with assay specific to distant relative B. divergens). The patient recovered after treatment with the standard dual antimicrobial regimen. In addition to blood smear, we used a unique digital PCR assay to follow the decrease in concentration of babesial DNA in the patient’s blood until complete recovery. Note that DNA levels in blood do not necessarily correlate with levels of live pathogen (i.e., active infection).

With the development of new and more sensitive diagnostic techniques, parasites like Babesia spp., primarily recognized as animal pathogens, are becoming increasingly reported as human pathogens too, even in areas where the parasite has not been reported previously. Babesiosis should be included in the differential diagnoses for immunocompromised patients displaying fever worldwide.

Dr. Smrdel is a researcher at the Institute of Microbiology and Immunology, Faculty of Medicine, University of Slovenia, Ljubljana, Slovenia. Her research interests are babesiae and Anaplasma phagocytophilum.

This work was supported by the Slovenian Research Agency (grant no. P3-0083).