We screened nonequine animals with unexplained neurologic signs or death in South Africa during 2010–2018 for Shuni virus (SHUV). SHUV was detected in 3.3% of wildlife, 1.1% of domestic, and 2.0% of avian species. Seropositivity was also demonstrated in wildlife. These results suggest a range of possible SHUV hosts in Africa.

Shuni virus (SHUV) (Peribunyaviridae: Orthobunyavirus) was isolated in the 1960s from livestock, Culicoides midges, and a febrile child in Nigeria (1,2). In South Africa, SHUV was identified as the causative agent of neurologic disease in horses (3); seropositivity was also demonstrated in 3.0% of veterinarians, suggesting human exposures (4). SHUV was subsequently identified in aborted livestock and cattle with neurologic disease in Israel, suggesting an extended range beyond Africa (5,6). We investigated other potential susceptible species in South Africa.

During February 2010–September 2018, a total of 101 whole blood, 71 serum, and 476 tissue specimens from 608 nonequine domestic animals, wildlife, and birds (19 fetuses, 118 juvenile and 471 adults) with unexplained neurologic or febrile disease or sudden unexplained death from across South Africa were submitted to the Zoonotic Arbo and Respiratory Virus Program, Centre for Viral Zoonoses, University of Pretoria (Pretoria, South Africa) as part of a passive zoonotic arbovirus surveillance program. We extracted RNA under Biosafety Level (BSL) 3 conditions using the QIAamp viral RNA mini kit (blood) or the RNeasy mini kit (tissue) (QIAGEN, https://www.qiagen.com), according to the manufacturer’s recommendations. We screened all samples by a SHUV real-time reverse transcription PCR (rRT-PCR) (7) and a newly designed rRT-PCR targeting a conserved area of the S segment of the Simbu serogroup (Appendix). We confirmed PCR-positive samples by Sanger sequencing (Inqaba Biotech, https://www.inqababiotec.co.za) and phylogenetic analyses (Appendix). We also screened all specimens for West Nile (WNV), Wesselsbron (8), Middelburg (MIDV), Sindbis (9), and equine encephalosis viruses (10).

In addition, serum samples from African buffalo (Syncerus caffer) (n = 45) and white rhinoceros (Ceratotherium simum) (n = 48) from Kruger National Park were collected in March 2014 and June 2016, respectively, by South African National Parks and from wild Nile crocodiles (Crocodylus niloticus) (n = 34) from northern KwaZulu-Natal collected during 2009–2012 by the Faculty of Veterinary Sciences, University of Pretoria, as part of surveillance studies. We examined tissue samples from a SHUV PCR-confirmed positive buffalo (MVA43/10) microscopically under a light microscope using routinely prepared hematoxylin and eosin stained (11) histological sections at the Section of Pathology, Department of Paraclinical Sciences, Faculty of Veterinary Science, University of Pretoria. We subjected serum samples to an epitope-blocking ELISA (eb-ELISA) (12,13) with modifications to detect antibodies to SHUV (Appendix).

We calculated odds ratios (OR) and 95% CI in EpiInfo version 7.2.0.1 (https://www.cdc.gov/epiinfo/index.html). We excluded animals that were found dead, aborted, or stillborn from OR analysis. 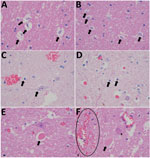 Necropsy examination on the buffalo showed no specific macroscopic lesions on histopathology examination of brain tissue (Figure 1). Pathological changes that could be detected in regions of the brain included mild white matter cerebro–cerebellar gliosis, especially microglial, associated with considerable glial apoptotic activity and occasional perivascular hemorrhage. In the spinal cord, occasional single neuronal necrosis (chromatolysis) and perineuronal hypereosinophilic bodies affecting the dorsal horns of the gray matter were distinctive. This finding seemed to be most severe in the lumbar spinal region. No evidence of demyelination or major immunological reaction was observed, apart from occasional perivascular lymphocytes. Development of appropriate antibodies for immunohistochemistry or probes for in situ hybridization may further describe the pathology of SHUV in animal tissue. 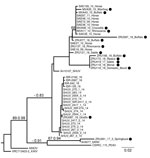 Figure 2. Phylogram of clade 1a, lineage I, of the Simbu serogroup (15) recovered from maximum-likelihood and Bayesian analyses of the small segment for SHUV isolates from wildlife and nonequine domestic animals, South...

We used phylogenetic analyses on the small segment of the Simbu serogroup to verify the molecular results. All novel sequences from this study, with 1 exception, were closely related to SHUV strains identified in horses in South Africa (3) in clade 1a of lineage I within the Simbu serogroup (bootstopping: posterior probabilities = 89:0.99) (Figure 2). An isolate from a springbok (ZRU261_17_3) clustered with Sango virus (bootstopping: posterior probabilities = 67:0.94). P-distance analysis based on the partial small segment demonstrated few nucleotide differences between novel SHUV strains and reference strains (98.0%–100.0% identity). Wildlife specimens were submitted mostly from dead animals that were already undergoing postmortem cytolysis, inhibiting further genetic analysis and isolation of the virus. The use of a PCR designed to detect Simbu group/orthobunyavirus genus PCR rather than SHUV-specific PCR facilitated detection of these infections.

We detected antibodies to SHUV by an eb-ELISA in 3/44 (6.8%) African buffalo and 2/48 (4.2%) white rhinoceroses but none in crocodiles. SHUV-specific IgG was confirmed, using microtiter virus neutralization assay, in 1 buffalo and 1 rhinoceros. Two of 3 buffalo and 1 rhinoceros positive for SHUV epitope antibodies were negative by microtiter virus neutralization assay, suggesting that these antibodies may have been elicited in response to closely related orthobunyavirus. Confirmation for the third buffalo was not possible because of depleted serum.

Our findings suggest that SHUV may have a wide host range, including several wildlife and domestic species, and should be included in the differential diagnosis of neurologic disease in animals. This study highlights the role of this virus as a potential emerging zoonotic pathogen in Africa that warrants increased surveillance and further investigation. Future epidemiologic studies would benefit from an increased sample size and more extensive serosurveys. Investigation of human infections may define SHUV’s importance as a zoonosis. The causative link between clinical manifestations in the various species and the evidence of SHUV infection must be regarded with caution because other possible infectious and noninfectious etiologies were not excluded by comprehensive investigations in all cases.

Dr. Steyn is a virologist and PhD candidate at the Centre for Viral Zoonoses at the University of Pretoria, South Africa. Her primary research focuses on investigating arboviruses with zoonotic potential at human–animal interface areas.

We thank participating veterinarians and veterinary pathologists from South Africa, as well as L.P. Snyman, for the help with the phylogenetic analyses.

Page created: March 25, 2020
Page updated: June 18, 2020
Page reviewed: June 18, 2020
The conclusions, findings, and opinions expressed by authors contributing to this journal do not necessarily reflect the official position of the U.S. Department of Health and Human Services, the Public Health Service, the Centers for Disease Control and Prevention, or the authors' affiliated institutions. Use of trade names is for identification only and does not imply endorsement by any of the groups named above.