We investigated a case of cutaneous infection in an immunocompromised patient in China that was caused by a novel species within the Mycobacterium gordonae complex. Results of whole-genome sequencing indicated that some strains considered to be M. gordonae complex are actually polyphyletic and should be designated as closely related species.

M. gordonae is frequently isolated from water systems and clinical samples as a potential opportunistic pathogen (4,5); clinical infections ranging from skin and lung infections to disseminated systemic infections have been reported, especially in immunosuppressed patients (6,7). Both the M. paragordonae and M. vicinigordonae strains were first isolated as nonpathogenic organisms from pneumonia patients (2,3). M. paragordonae is often isolated from hospital water systems and devices, but only 1 case of iatrogenic M. paragordonae infection has been reported (8,9). These reports reveal the dissimilar effects produced by different M. gordonae–like strains.

The advent of whole-genome sequencing has brought genomewide analyses into common use to delineate species (10–12). The widely accepted cutoffs adopted for the average nucleotide identity (ANI) and in silico DNA–DNA hybridization (isDDH), 95%–97% for ANI and 70% for isDDH, strongly correlate with traditional DDH division values, providing more robust resolution than phenotyping or mycolic acid analysis for determining mycobacterial taxonomy (11,12). We report a case of cutaneous infection in Jiangsu Province, China, caused by a previously undescribed novel species belonging to the M. gordonae group.

Figure 1. Novel Mycobacterium gordonae–like infection in a 63-year-old man in China. A) Verrucous dull nodule on the left shin of the patient. B) Mycobacteriumcolonies grown on Löwenstein–Jensen...

A 63-year-old man was admitted to the hospital for a 5-year history of a nodule on his left shin. The asymptomatic lesion initially appeared as a papule and gradually developed into a dull red verrucous nodule with scales (Figure 1, panel A). No trauma history before the onset was reported. The patient had received a diagnosis of lupus erythematosus 30 years earlier and had taken oral prednisone (20 mg/d) over the previous year. Laboratory test results indicated no remarkable findings. Histologic examination of a skin sample showed irregular epithelial hyperplasia and granulomatous infiltrations of a large number of epithelioid histocytes, neutrophil cells, plasma cells, and lymphocytes in the dermal layer. After 19 days of culture, orange colonies were observed on modified Löwenstein–Jensen slants at 32°C (Figure 1, panel B). The organism was scotochromogenic with a smooth appearance and grew well at 32°C and 37°C on both Löwenstein–Jensen slants and Middlebrook 7H9 with oleic acid dextrose citrate. The colonies were confirmed to be rod-shaped, acid-fast bacterium.

We extracted DNA from the colonies for PCR analysis and compared the sequences using BLAST (https://blast.ncbi.nlm.nih.gov/Blast.cgi). The 16S rRNA (1452 bp) gene shared greatest similarity (99.51%) with M. gordonae ASCr-1.2; gene sequencing showed rpoB (365 bp) shared 97.53% and hsp65 (765 bp) 95.53% similarity with M. paragordonae 49061. On the basis of these results, we diagnosed infection with a member of the M. gordonae complex. Drug sensitivity analysis revealed the bacterium to be sensitive to moxifloxacin, levofloxacin, ethambutol, and amikacin and resistant to clarithromycin, isoniazid, and rifampicin; we therefore prescribed a moxifloxacin regimen for the patient. Because the lesion had not healed over several years, we surgically resected it and applied photodynamic therapy after 2 months of antimicrobial drug treatment. One month later, the patient reported that the lesion had recovered well and refused further oral antimicrobial drugs. No recurrence was observed in the following year. 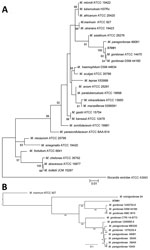 The core-genome phylogeny of the M. gordonae complex, constructed using a previously described method, suggested that the isolated strain is a branch within the cluster but distant from other M. gordonae-like strains (14,15) (Figure 2, panel B). Integration of these highly concordant results strongly suggested that the isolate is distinct from present M. gordonae–like strains and represents a novel species within the M. gordonae complex. We proposed Mycobacterium camsnse sp. nov. as the name for this strain.

M. gordonae is generally considered a minimally pathogenic mycobacteria. Nonetheless, clinical infections have been reported, even in immunocompetent individuals (6–7). We isolated a distinct strain within the M. gordonae group from a skin infection using whole genome–level approaches based on ANI, isDDH, and core gene phylogeny. We proposed the name Mycobacterium camsnse sp. nov. for this strain. We also provided genomic insights into the heterogeneity of the M. gordonae–like strains, including finding 2 strains potentially misclassified as M. gordonae ssp., and demonstrated that the present M. gordonae group should be designated as 5 closely related species.

Conventional routines for describing species, such as wet-lab DDH and phenotypic tests, which are tedious and restricted by laboratory capacity, often do not delineate closely related species. Genome-based analysis affords a more accurate alternative for delineating species. Although digital gene-expression analyses might not have provided enough conclusive authentication data, the low genomewide similarity between the strain X7091 and M. gordonae group strongly support it as a novel species. Only a few M. gordonae assembly models are available, and large-scale investigations are needed to better understand species diversity, geographic distribution, and clinical significance of M. camsnse sp. nov. infections.

The persistent but limited nonpurulent lesion of the immunosuppressed patient in our study reflects the attenuated nature of the pathogen. The various drug resistance properties of X7091 and other M. gordonae–like strains indicate the need for drug sensitivity testing before initiating drug treatment for M. gordonae–like strain infections (6,7). Our patient responded well, indicating that operation combined with antimicrobial therapy could be a good option for treating environmental Mycobacterium-induced skin infections.

Dr. Mei is a dermatologist at the Institute of Dermatology, Chinese Academy of Medical Sciences and Peking Union Medical College in Nanjing, China. Her primary research interest is mycobacterial infectious diseases.

Page created: August 24, 2021
Page updated: October 19, 2021
Page reviewed: October 19, 2021
The conclusions, findings, and opinions expressed by authors contributing to this journal do not necessarily reflect the official position of the U.S. Department of Health and Human Services, the Public Health Service, the Centers for Disease Control and Prevention, or the authors' affiliated institutions. Use of trade names is for identification only and does not imply endorsement by any of the groups named above.