Previous studies analyzed only a limited number of OXA-244–producing E. coli of an epidemic clone belonging to sequence type (ST) 38 that spread in countries in Europe (3,5,7,9). More data on the epidemiology and genetics of OXA-244 are required to understand its spread in Europe. We used whole-genome sequencing (WGS) to characterize the epidemiology of OXA-244–producing E. coli circulating in France during 2016–2019. 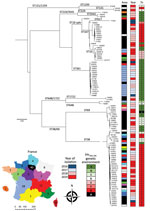 On all 97 genomes of OXA-244–producing E. coli, we used a core genome single-nucleotide polymorphism (SNP)–based approach to create a phylogenetic tree by using CSIPhylogeny (https://cge.cbs.dtu.dk/services/CSIPhylogeny). To identify clades within STs, we performed a nested phylogenetic analysis with isolates of each ST to construct a SNP matrix. Isolates within the same clade would be highly suggestive of patient-to-patient cross-transmission of the same strain. We considered 2 strains to be part of the same clade if they were separated by <100 SNPs along their common genome (Appendix 2 Figure). We identified large clades corresponding to clonal dissemination of a single strain in the same area, including 5/12 isolates of ST167 and 15/17 isolates of ST361. We identified <7 different clades of ST38, and most (30/37) isolates belonged to the same clade (Appendix 2 Figure). However, these 30 ST38 isolates were collected in 9 different areas of France and 25 were isolated during 2018–2019 (Figure 1).

Because assembly of regions with repeated sequences was difficult with Illumina WGS data, we sequenced some isolates by using long read nanopore technology by using a MinIon (Oxford Nanopore, https://nanoporetech.com) sequencer (10). We performed WGS on 3 isolates belonging to the most prevalent STs: isolate 119E4 (ST361), isolate 120E4 (ST38), and isolate 156E2 (ST69) (Appendix 1 Table). We found a chromosomal localization of blaOXA-244 gene in the 3 isolates. By combining data obtained by both WGS technologies, we reconstructed the different genetic environments of blaOXA-244 gene and annotated the assembled sequences by using CLC Genomics Workbench version 12.0 software (QIAGEN, https://www.qiagen.com). 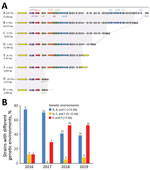 Figure 2. Genetic relationship and environment of blaOXA-244 genes identified in Escherichia coli isolates collected during 2016–2019, France. A) Schematic representation of the close genetic context of ...

Dissemination of ST38 OXA-244–producing E. coli has been observed in many countries in Europe (3–7) and a few other countries around the world (12,13). However, most of these studies focused on ST38. Our results confirm the phenomenon of OXA-244–producing E. coli isolates in France because 38% of isolates in our study belonged to ST38. In addition, we observed an increased number of ST38 isolates during 2018–2019. Phylogenetic analysis identified a substantial clade inside ST38 (Appendix 2 Figure), but massive dissemination of this clone in France likely does not correspond to cross transmission of a single strain in different areas. The few SNP differences identified among ST38 isolates suggest this clade emerged recently. Accordingly, inside this compact ST38, the <100 SNP cutoff used to discriminate between 2 clades might be lowered because it was recently described for another high-risk clone, Klebsiella pneumoniae carbapenemase–producing K. pneumoniae ST258 (14).

The other common STs noted in our study are ST361, ST167, ST69 and ST10. In Europe, OXA-244–producing E. coli of ST69, ST167, and ST361 have been reported in Denmark (6), and ST69 and ST10 in Switzerland. Unlike what we observed with ST38, clones observed inside ST167 and ST361 mostly correlate with the same geographic area suggesting patient-to-patient cross-transmission.

As previously described for ST38 E. coli VAL (2), we demonstrated the chromosomal location of the blaOXA-244 gene in 3 isolates belonging to the 3 main STs, ST38, ST361, and ST69. The chromosomal localization of blaOXA-244 together with the intrinsic lower hydrolytic activity of OXA-244, compared with OXA-48, contribute to the difficulties in accurately detecting OXA-244–producing E. coli using classical screening media (8,15), suggesting a large underestimation of the real spread of OXA-244 producers.

In 2013, the blaOXA-244 gene initially was reported to be embedded in a 21,852-bp transposon Tn51098, which contains ΔTn1999.2 (2). This structure still is present in 38.1% of OXA-244–producing E. coli. To our knowledge, Tn51098 is the sole genetic structure reported for blaOXA-244. In our collection, blaOXA-244 was embedded in truncated forms of Tn51098 in most isolates. Of note, in most (86.5%) ST38 OXA-244–producing E. coli the close genetic context of the blaOXA-244 gene was reduced to a small 3,310-bp fragment matching Tn51098 and corresponding to a truncated form of the Tn1999.2. In addition, the most recently collected isolates possess short versions of the Tn51098 compared with the isolates collected earlier (Figure 2, panel B). The effect on the clonal dissemination of this genome reduction around blaOXA-244 gene (e.g., better fitness) remains undetermined. Further analysis on the blaOXA-244 close genetic environment could elucidate the effects of this genome reduction.

Dr. Emeraud is an assistant professor at the INSERM, Le Kremlin-Bicêtre, France. Her main research interests include epidemiology, genetics, and biochemistry of β-lactamases in gram negative bacteria.

Page created: February 17, 2021
Page updated: March 18, 2021
Page reviewed: March 18, 2021
The conclusions, findings, and opinions expressed by authors contributing to this journal do not necessarily reflect the official position of the U.S. Department of Health and Human Services, the Public Health Service, the Centers for Disease Control and Prevention, or the authors' affiliated institutions. Use of trade names is for identification only and does not imply endorsement by any of the groups named above.