Leishmaniases in the European Union and Neighboring Countries

Leishmaniases are endemic in humans and animals in part of the European Union (EU) and its neighboring countries. Leishmania species in this region are L. major, L. tropica, and the L. donovani complex species (including L. infantum and L. donovani sensu stricto). All cause cutaneous leishmaniasis (CL); visceral leishmaniasis (VL) is caused mainly by L. donovani complex species. There is evidence that the risk for leishmaniases is increasing in some EU and neighboring countries (1). We conducted a questionnaire survey to gather information on the epidemiologic situation, surveillance, prevention and control measures, and drivers of emergence of animal and human leishmaniases in this region during 2010–2020.

Figure 1. Geographic distribution of countries that responded to survey questionnaires about animal and human leishmaniases in Europe, 2020.

We reviewed the countries’ epidemiologic status with regards to autochthonous Leishmania spp. infections in animals and humans and clinical forms in humans. The mapping of the countries with autochthonous transmission matches previous published information with few discrepancies. For instance, according to the questionnaire, Bosnia and Herzegovina and Hungary do not have autochthonous canine leishmaniasis cases, although such cases have been described (4,5). Human cases of leishmaniasis due to L. tropica were reported in Cyprus and Serbia and due to L. major in Georgia; however, none of the literature presents concurring evidence (Table 2). 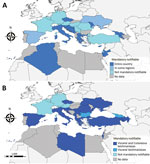 Figure 2. Geographic distribution of mandatory notification status for animal (A) and human (B) leishmaniases, 2020.

Animal leishmaniases are notifiable in 17 countries and human leishmaniases in 20 countries (Table 1; Figure 2). In Palestine and Turkey, AniL is not notifiable despite a high prevalence among dogs (6,7). Similarly, in France, neither AniL nor HumL are notifiable although the diseases are endemic in the south (8). Leishmaniases surveillance is not mandatory at the EU level which constitutes a limitation for successful control.

Seven countries conduct AniL surveillance (Table 1), indicative of its low priority among the animal health authorities. The target animal population for surveillance included symptomatic and asymptomatic dogs in Armenia, Cyprus, Italy, Spain, and Ukraine; we also studied wildlife in leishmaniasis foci in Spain. Testing subclinically infected dogs indicated awareness of their role as reservoirs of the parasite (1). Similarly, wild lagomorphs were the main reservoir of L. infantum in a HumL outbreak in Madrid in Spain (9). Surveillance of HumL is conducted in 19 countries, including all of those with autochthonous infections except Serbia (Table 1).

Antibody tests, including the immunofluorescence antibody test, ELISA, and the rapid immunochromatography test, are the main surveillance diagnostic methods used, followed by PCR. Antibody tests play a fundamental role in disease surveillance because they are relatively cheap and easy to use (10). However, their sensitivity to detect subclinical infections is lower than that of PCR tests (10), and they do not discriminate naturally infected from vaccinated dogs (11). PCR tests are ideal for epidemiologic studies to estimate Leishmania spp. infection prevalence in healthy hosts, but their diagnostic validity depends on the sample used, the DNA sequence target, and the PCR protocol. Standardization of PCR tests in leishmaniasis diagnosis is needed (12).

Of the 7 countries that have ongoing AniL prevention and control programs (Table 1), 5 use topical insecticides for dogs, 5 are diagnosing and treating leishmaniases in dogs, and 2 use canine leishmaniosis vaccines. In all countries, infected dogs may be euthanized on welfare grounds. Lack of funds and treatment costs were considered the most important AniL control challenges. Human leishmaniasis prevention and control activities are implemented in 12 countries (Table 1); for L. infantum, actions focused on the use of insecticides on dogs, and for L. major, L. tropica, and L. donovani, the common activity was the use of peridomiciliary and intradomiciliary insecticides. Lack of funds and capacity constraints are considered the main challenges for HumL.

Although zoonotic L. infantum strategies are centered on preventing and eliminating infections in dogs, the main parasite reservoir host, we found that insecticides and treatments are not fully effective and are expensive, and so provided to a relatively small proportion of dogs. Leishmaniasis control needs the One Health approach to account for the complexity of its transmission cycle involving humans, domestic animals, wildlife, and sand fly vectors (13).

Animal leishmaniases are considered emergent diseases in Cyprus and Jordan and in parts of Algeria, Armenia, France, Georgia, Jordan, Montenegro, North Macedonia, Romania, Slovenia, Turkey, and Ukraine. The most important AniL emergence risk factor is the lack of control. Human leishmaniases are considered emerging diseases in Cyprus, Libya and Malta and in parts of Albania, Austria, Armenia, Azerbaijan, Georgia, Israel, Italy, Montenegro, and Spain. The main risk factors for HumL emergence are vector expansion for L. infantum, and movement of infected persons between countries for L. major, L. tropica, and L. donovani.

In general, the perceived increasing risk for AniL and HumL was in line with the literature. In the EU and its neighborhood, the risks include movement of humans and dogs, increased number of immunosuppressed patients, climate warming, and other environmental changes affecting vector and reservoir host distribution (1,14). Limitations associated with existing surveillance and control programs, along with the fact that leishmaniases are often regarded as a local problem rather than a transnational problem, are deemed major obstacles to overcome to prevent leishmaniases emergence in the EU and its neighborhood.

Leishmaniases are considered widespread, endemic, or emerging infections in the EU and its neighborhood, yet are neglected and underreported because they are low priority at the country and EU level. Our study revealed a clear need to strengthen leishmaniasis prevention and control programs in the EU and its neighborhood. We recommend analysis of leishmaniasis incidence in the region for an objective assessment of disease emergence, and also improvement of prevention and control programs based on a robust surveillance and following a One Health approach.

Dr. Berriatua is a professor of animal health at the University of Murcia in Spain, where he teaches and conducts research on the epidemiology and ecology of parasitic diseases and specifically leishmaniases.

Y.V.d.S. is employed with the European Food Safety Authority (EFSA) in the ALPHA Unit that provides scientific and administrative support to EFSA’s scientific activities in the area of Animal Health and Welfare. The positions and opinions presented in this article are those of the authors alone and are not intended to represent the views or scientific work of EFSA.

Page created: April 21, 2021
Page updated: May 18, 2021
Page reviewed: May 18, 2021
The conclusions, findings, and opinions expressed by authors contributing to this journal do not necessarily reflect the official position of the U.S. Department of Health and Human Services, the Public Health Service, the Centers for Disease Control and Prevention, or the authors' affiliated institutions. Use of trade names is for identification only and does not imply endorsement by any of the groups named above.

Leishmaniases in the European Union and Neighboring Countries