Extensive dermatophytosis caused by terbinafine-resistant Trichophyton indotineae harboring Phe397Leu and Leu393Ser substitutions in the squalene epoxidase enzyme was diagnosed in France. Analysis of internal transcribed spacer sequences revealed the wide spread of this species in Asia and Europe. Detection of T. indotineae in animals suggests their possible role as reservoirs.

In recent years, dermatologists in India have alerted the medical community to the wide spread of recalcitrant extensive dermatophytosis across the country. Clinically, extensive dermatophytosis is characterized by tinea cruris, tinea corporis, or both, of the glabrous skin (1). The spread of this condition is thought to be a consequence of ill-advised use of over-the-counter corticosteroid-antifungal combinations, resulting in the emergence of terbinafine-resistant Trichophyton strains in India (2). T. mentagrophytes and T. interdigitale were suspected, but the correct identity of the etiologic agent of this outbreak was debated (3,4). Genomic data showed that India terbinafine-resistant isolates form a distinct clade from T. interdigitale and T. mentagrophytes (5). Recently, the clinical, mycological, and molecular features of 2 highly resistant T. interdigitale isolates from patients from Nepal and India, harboring mutations in the squalene epoxidase (SQLE) gene, have been analyzed and identified as a new species named T. indotineae (6).

The taxonomy of the T. mentagrophytes/T. interdigitale complex, including T. indotineae, has been revised based on multigene phylogeny revealing that analysis of the high-mobility group gene clearly demarcates the species, as suggested elsewhere (5,7). T. indotineae appears to be the primary contributor to terbinafine resistance (8). Migration and travel enable the spread of nonautochthonous pathogens in nonendemic areas. Terbinafine-resistant T. indotineae isolates have been recently identified in Europe (9–11). We present a series of extensive dermatophytosis cases in France caused by terbinafine-resistant T. indotineae and document the worldwide spread of T. indotineae using results from internal transcribed spacer (ITS) sequence-based screening.

Ten patients in 4 hospitals in France with clinical manifestations of tinea cruris or tinea corporis were diagnosed with extensive dermatophytosis caused by T. mentagrophytes (Table; Appendix Figure 1). The first case was observed in 2017, and the involvement of T. indotineae, confirmed in 2019, revealed that the condition was probably introduced into France several years earlier. Patients were 9 men and 1 woman (mean age 30 years, range 16–53 years). All but 1 patient came from or had visited Bangladesh (Table), a commonality probably related to a 2016 increase in migrants from Bangladesh applying for asylum in France (12). Source of infection was difficult to determine. Patients 3 and 10 reported clinical symptoms after a journey in Bangladesh. Patients 6 and 9 reported that symptoms started before arriving in France after a stay in refugee camps in Turkey and Bangladesh. For patients 1, 4, and 8, skin lesions had appeared after living in France for 3–4 years, suggesting that human-to-human transmission could have occurred in France. All patients declared no contact with animals.

Eight out of 10 patients received oral treatment with terbinafine. Clinical cure or treatment failure were difficult to evaluate because most patients could not be reached for follow-up. We observed clinical cure in 2/8 patients (patients 1 and 3) and clinical improvement in 2/8 patients (patients 2 and 9). However, we observed no clinical improvement or relapse in 4/8 patients (patients 4, 5, 7, and 10). Patient 4 received a second round of oral griseofulvin treatment during the 3 months after initial treatment, and patient 10 received a second round of oral terbinafine for 3 months followed by griseofulvin treatment over 6 months, without clear clinical improvement for either. Finally, we observed clinical improvement in patient 10 after 1 month of a 2-month treatment with itraconazole (400 mg/d). Indeed, limited effectiveness of 4 oral antifungals (fluconazole, griseofulvin, itraconazole, and terbinafine) has been described in India, but itraconazole has shown better efficacy than the others (13). Increasing terbinafine exposure through higher doses or longer durations has been proposed to overcome treatment failure and could protect azole-based antifungal drugs from developing resistance (14).

Seven isolates initially diagnosed as T. mentagrophytes by microscopy, mass spectrometry, and clinical localization were available for further characterization (Table). ITS region sequencing revealed that all isolates were T. indotineae. Three out of 6 isolates grew on a solid terbinafine-containing medium (Appendix Figure 2). We confirmed terbinafine resistance by the EUCAST (https://eucast.org) method (15) with MICs of 2 or >8 μg/mL (Table). Sequencing the SQLE gene revealed that 4 resistant isolates contained Leu393Ser, Phe397Leu, or Phe397Leu/Ala448Thr substitutions. Three terbinafine-susceptible isolates exhibited no substitutions or an Ala448Thr substitution alone. We determined low MICs for itraconazole, voriconazole, and amorolfine for 6 isolates (Table).

Using an ITS sequence-based screening of sequences stored in GenBank and a review of literature up through March 2021 (Appendix Table 2), we investigated the epidemiologic characteristics of T. indotineae. Information was available about the origin of the infection for 526/537 sequences found. Human-to-human transmission was predominant because 98.8% of the sequences identified were of human origin; however, 6 sequences indicated an animal origin. Two sequences detected during a survey that included 760 calves came from Egypt, 1 detected in an infected dog came from India, and 3 came from Poland but with no specific animal host indicated. These results suggest that animals can be reservoirs of T. indotineae and zoonotic transmission must be considered. 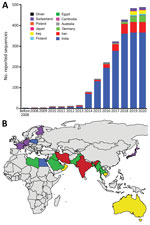 Figure 1. Analysis of dynamic and geographic distribution of Trichophyton indotineaereported sequences from France (this study) and reference sequences from GenBank for 2004–2021 A) Cumulative curves of 486 published sequences;...

We obtained geographic information for all 537 sequences and temporal information for 486 sequences. Our study revealed that T. indotineae was present in India, Australia, Iran, and Oman during 2004–2013 (Figure 1, panel A). After 2014, a substantial increase in reported cases was observed, related to the outbreak in India. Since 2019, the number of reported T. indotineae cases has increased in Europe, confirming its spread. Currently, 76% of the known sequences have been identified in India, 12.8% in the Middle East, 9.6% in Europe, and 1.1% in other countries (Figure 1, panel B). Cases reported in Europe are supposed to have been introduced by migrants or travelers from India, Bangladesh, Pakistan, Bahrain, Libya, Saudi Arabia, or Thailand, suggesting the presence of T. indotineae in those countries. The cases imported from Bangladesh that were reported in France, together with those reported in Germany (9), suggest that T. indotineae transmission could be endemic in Bangladesh. Results obtained in this study were limited to data obtained from sources available in GenBank; T. indotineae distribution is probably greater than what is documented here. 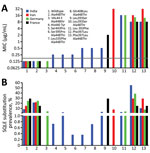 The epidemiology of terbinafine-resistant T. indotineae isolates was difficult to assess because studies recording available molecular analysis and in vitro antifungal susceptibility testing were scarce. In India, 71.3% (n = 279) of reported isolates were resistant to terbinafine, but in Iran, 71.8% (n = 32) were susceptible. Of the isolates from this study, 50% (n = 29) from Germany and 57.1% (n = 7) from France were resistant. Isolates from India showed 11 different single or combined missense mutations of the SQLE gene with a large range of terbinafine MICs (Figure 2). Of note, Phe397Leu and Leu393Phe substitutions, associated with terbinafine resistance, were predominant in isolates from India and Germany, probably related to population movements between the 2 countries. Leu393Ser substitution was predominant in France in the isolates from Bangladesh.

The medical community and organizations receiving migrants and travelers should be aware that extensive dermatophytosis linked to terbinafine-resistant T. indotineae has reached France. Efficient systems to promptly identify terbinafine-resistant T. indotineae isolates must be implemented to halt the progression of this pathogen throughout Europe.

Dr. Jabet was a final-year resident at La Pitié-Salpêtrière Hospital (now a medical mycologist at La Pitié-Salpêtrière Hospital and Saint Antoine Hospital) in Paris, France. His primary research interests are dermatophytosis infections and emerging fungal pathogens. Dr. Brun is a medical mycologist working at Avicenne Hospital in Bobigny, France, and is particularly interested in dermatophytosis and fungal infections observed in migrants.

We thank technical staff of the parasitology-mycology and dermatology departments from the hospitals included in this study.

Page created: November 29, 2021
Page updated: December 20, 2021
Page reviewed: December 20, 2021
The conclusions, findings, and opinions expressed by authors contributing to this journal do not necessarily reflect the official position of the U.S. Department of Health and Human Services, the Public Health Service, the Centers for Disease Control and Prevention, or the authors' affiliated institutions. Use of trade names is for identification only and does not imply endorsement by any of the groups named above.