The fungus Ophidiomyces ophiodiicola is the etiologic agent of snake fungal disease. Recent findings date US occurrence at least as far back as 1945. We analyzed 22 free-ranging snakes with gross lesions consistent with snake fungal disease from museum collections from Europe. We found 5 positive samples, the oldest collected in 1959.

In the past few decades, fungal agents have surfaced as relevant threats to conservation and biodiversity among both ectotherms and endotherms (1–3). The emerging fungal agent Ophidiomyces ophiodiicola has been detected in both captive and free-ranging snakes in the United States in the past 16 years (4–7) and more recently in the United Kingdom and Czech Republic (8). O. ophiodiicola fungus has been associated with a variably severe dermatitis but also multisystemic disease (9). Experimental infections (10) demonstrated the causative association between O. ophiodiicola infection and snake fungal disease (SFD), the common name attributed to the disease caused by this fungus. The effect on free-ranging populations of snakes is not completely understood, but many species of snakes appear to be susceptible and different populations appear to have been negatively affected (9,11).

A recent article showed that the earliest evidence of O. ophiodiicola infection in North America dates back to 1945 (12). However, records of O. ophiodiicola fungi in Europe date back only to 2010–2016 (8). Detection of 2 phylogenetically distinct lineages in the United States and Europe consistent with genetic differences between the clades, presumably reflects independent evolution of the lineages. To acquire additional data about the origins of this agent in Europe, we obtained skin samples from free-ranging snake collections from multiple natural history museums in Switzerland.

We selected 22 skin samples with macroscopic lesions consistent with SFD out of 1,100 free ranging snakes examined from the collections of 3 natural history museums in Switzerland (Table 1; Appendix). We collected tissue samples from the integument of snakes showing obvious macroscopic lesions consistent with dermatitis (Appendix Figure 1). Snake specimens were preserved in 100% ethanol. We collected tissue samples using sterile instrumentation changed between each sampling. We placed each tissue sample in a cryotube containing an aliquot of absolute ethanol. Upon delivery at the laboratory, tissue samples were split into 2 portions for processing for DNA extraction and histopathology (Appendix).

We performed PCR according to various protocols aiming to detect multiple gene targets belonging to the O. ophiodiicola genome. Initial screening for the presence of O. ophiodiicola fungi was performed by applying a modified PCR protocol (an original protocol performed in a conventional PCR setting) (13) targeting the partial sequence of the intergenic spacer (IGS). We then tested positive samples and, later, negative samples to rule out false-negative results by IGS PCR by using 3 additional newly developed protocols targeting distinct genome sequences: the 5.8–28s RNA internal transcribed spacer (ITS) 2, the transcription elongation factor (TEF), and the actin genes (Appendix). We used nucleotide sequences obtained from each of the readable PCR amplicons for phylogenetic analysis. We used partial sequences from the amplified ITS, TEF, and actin targets to build up a maximum-likelihood phylogenetic tree for each of the amplified genomic sequences (Appendix). All 22 samples examined for the presence of O. ophiodiicola genomic DNA were characterized by gross and microscopic lesions consistent with dermatitis (Table 2; Appendix Figures 1–3).

Overall, we observed fungal elements in 14/22 examined tissue sections. All samples positive for SFD by PCR were characterized by the presence of intralesional fungal hyphae and heterophilic granulomas or microabscesses (Appendix Figures 2, 3); we observed intradermal granulomas in 1 sample, in which we could not histologically detect any fungal elements. When we used the original IGS-PCR protocol (13), 5/22 samples yielded a detectable band (sample numbers 1, 6, 7, 9, and 12). Samples 6, 7, 9, and 12 were also confirmed positive when we used the ITS primer set. Four of 22 samples (6, 7, 9, and 12) yielded a detectable band when we used the actin primer set. Two of 22 samples (9 and 12) yielded a detectable band when we used the TEF primer set. Despite positive IGS amplification, we could not amplify sample 1 with either the actin or the TEF primer sets. We obtained a nonspecific amplification with the ITS primer set and consequently did not further consider sample 1 for sequence comparison and phylogenetic analysis (Appendix, Figure 4). 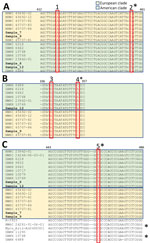 Sequence alignments, reflected in the phylogenetic trees (Appendix Figure 4), showed unique single-nucleotide polymorphisms clearly separating the museum samples from Switzerland into either the clade circulating in Europe or the one circulating in North America (Figure) (8). Results were consistent across the partial sequences of the targeted ITS, TEF, and actin genomic regions. Specifically, samples 7 and 9 from Italy always clustered within the clade from Europe, whereas 6 and 12 from Switzerland clustered within the clade from North America (Appendix Figure 4).

Our research, conducted similarly to an investigation performed in North America, provided evidence of the presence of O. ophiodiicola infection in free-ranging snakes in Europe at least since 1959 (12). Our findings were supported by test results for 4 distinct molecular targets and consistent histological findings. Furthermore, all PCR-positive samples confirmed by sequencing were also associated with the presence of intralesional fungal structures consistent with O. ophiodiicola and associated with an obvious inflammatory reaction.

Of note, supporting data are consistent with the surprising finding that the proposed clades from both North America and Europe (8) have been present at least since the early 1960s. Furthermore, because our dataset spanned only 1959–2012, O. ophiodiicola fungi might have been present in Europe even before 1959. The significance of both clades existing in Europe will require further investigations. In spite of the absence in the United States of any strain proven to belong to the clade from Europe, introduction cannot be completely ruled out (14). In an alternative scenario, the clade from North America might have been introduced into Europe before the 1950s. At the moment, the colonization of O. ophiodiicola fungi on the European continent appears to have occurred several decades before proposed (8).

Detection of O. ophiodiicola fungi in Italy and Switzerland north of the Alps, further expands its known distribution in Europe. Curiously, Switzerland appears to be the only country in Europe where the clade of O. ophiodiicola fungi from North America has to date been identified. However, sampling bias secondary to the restricted sampling area selected cannot be ruled out. Finally, although the 2 samples from Switzerland that clustered with the clade from North America were from different regions, the regions are located relatively close geographically to one another (160 km or ≈100 miles).

Dr. Origgi is a veterinary microbiologist and pathologist with strong interest in infectious diseases and associated pathogenesis in wildlife and nondomestic animals.

Page created: July 31, 2022
Page updated: September 21, 2022
Page reviewed: September 21, 2022
The conclusions, findings, and opinions expressed by authors contributing to this journal do not necessarily reflect the official position of the U.S. Department of Health and Human Services, the Public Health Service, the Centers for Disease Control and Prevention, or the authors' affiliated institutions. Use of trade names is for identification only and does not imply endorsement by any of the groups named above.