We report 5 clustered acute gastroenteritis outbreaks in long-term care facilities in Utah, USA, that were linked to healthcare employees working at multiple facilities. Four outbreaks were caused by norovirus genotype GIX. We recommend continued norovirus surveillance and genotyping to determine contributions of this genotype to norovirus outbreaks.

Norovirus is the leading cause of acute gastroenteritis worldwide (1). The virus can be transmitted through person-to-person contact, aerosolized vomitus, contaminated food or water, or fomites (2). Noroviruses are divided into 10 genogroups; viruses in genogroups GI, GII, GIV, GVIII, and GIX cause illness in humans. Norovirus GIX was first identified in fecal samples collected in 1990 from US troops deployed to Saudi Arabia (3). This genogroup was previously known as GII.15 and was reclassified recently (4).

On March 31, 2021, the Utah County Health Department and Utah Department of Health were notified of an outbreak of gastrointestinal illness at LTCF A. The outbreak was believed to have originated from 2 residents on March 28 and 29. One resident vomited in a well-trafficked, carpeted hallway, which likely contaminated the environment. By mid-April, 4 other LTCFs (B–E) within 20 miles of facility A reported similar outbreaks.

We asked LTCFs to provide data on resident and staff illnesses and a list of residents who were receiving services from home healthcare companies. We conducted interviews with home healthcare employees in September 2021 to identify symptoms of gastrointestinal illness, which residents were cared for by those employees, and which facilities they worked in.

We collected fecal samples from symptomatic residents and staff at facilities A–D during active illness; no samples were collected from facility E. After etiology was confirmed as norovirus by the Utah Public Health Laboratory, we forwarded all samples to the California Department of Public Health Viral and Rickettsial Disease Laboratory, which serves as a CaliciNet outbreak support center for genotyping and next-generation sequencing. 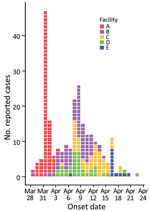 We obtained partial sequences of RdRp and capsid genes from 12 of 13 positive specimens by using dual region reverse transcription PCR, genotyped the virus as norovirus GIX.1[GII.P15], and uploaded the sequence data into the CaliciNet database. All 12 partial RdRp or capsid sequences showed 100% nucleotide identity. NGS produced near-complete genomes (≈7,490 nt) for all 12 specimens, which were 99.9%–100% identical. The closest matching sequence in GenBank (accession no. MN227777) had a 98% nucleotide identity. By using phylogenetic comparisons of complete RdRp and capsid nucleotide sequences (Figure 2), we determined the 12 sequences from facilities A–D were closely related to LTCF outbreaks in California in 2021 (GenBank accession nos. OK247589 and OK247590). We submitted the near-complete genomic sequences for the 12 specimens from Utah to the National Center for Biotechnology Information (accession nos. OL685293–304).

Our investigation highlights the ability of norovirus to spread rapidly despite increased disease prevention measures established during the COVID-19 pandemic. Whereas some pandemic restrictions were beginning to ease in the spring of 2021, LTCFs in Utah maintained precautions, including enhanced cleaning protocols. In addition, the home healthcare company that provided services to the facilities in our investigation reported limiting the number of facilities where each employee worked to prevent COVID-19 transmission between facilities. Our results show that these precautions were insufficient to prevent transmission of norovirus GIX and emphasize the overall challenges of controlling norovirus outbreaks.

In addition to these outbreaks in Utah, norovirus GIX was reported as the cause of 7 acute gastroenteritis outbreaks in other states during September 1, 2020–September 30, 2021 (https://www.cdc.gov/norovirus/reporting/calicinet/data.html). These numbers represent a substantial increase in reported GIX outbreaks in the United States, considering only 2 were reported during 2009–2016 (5,10). We recommend continued norovirus surveillance and genotyping to determine contributions of the uncommon GIX genotype to increasing norovirus outbreaks.

Ms. Osborn is an epidemiologist at the Utah Department of Health, Salt Lake City, UT. She works primarily on enteric disease surveillance and outbreak investigation.

We thank Leslie Barclay and Hannah Browne for extracting data from CaliciNet; Blanca Molinar, Chelsea Wright, Alice Chen, and Tasha Padilla for their laboratory support; Preeti Chhabra for assistance with the phylogenetic trees; and the Healthcare Associated Infections program at the Utah Department of Health for providing infection prevention support to the outbreak facilities.

The findings and conclusions in this report are those of the authors and do not necessarily represent the official position of the Centers for Disease Control and Prevention or the views or opinions of the California Department of Public Health, California Health and Human Services Agency, or Utah Department of Health.

Page created: September 08, 2022
Page updated: October 24, 2022
Page reviewed: October 24, 2022
The conclusions, findings, and opinions expressed by authors contributing to this journal do not necessarily reflect the official position of the U.S. Department of Health and Human Services, the Public Health Service, the Centers for Disease Control and Prevention, or the authors' affiliated institutions. Use of trade names is for identification only and does not imply endorsement by any of the groups named above.