To determine Bartonella spp. dynamics, we sampled bats and bat flies across 15 roosts in Costa Rica. PCR indicated prevalence of 10.7% in bats and 29.0% in ectoparasite pools. Phylogenetic analysis of 8 sequences from bats and 5 from bat fly pools revealed 11 distinct genetic variants, including 2 potentially new genotypes.

Bartonella, the causative agent of bartonellosis, is a genus of gram-negative bacteria. Bartonellosis causes a range of symptoms from severe to life-threatening (e.g., endocarditis and meningitis). Clinical syndromes from Bartonella infections include trench fever (B. quintana), cat scratch disease (B. henselae), and Carrion’s disease (B. bacilliformis) (1). Bats (Order Chiroptera) and their blood-feeding ectoparasitic bat flies (Superfamily Hippoboscoidea) host a diversity of Bartonella species, awakening interest in their potential role as natural reservoirs for this pathogen (2,3). To learn more about this interplay, we examined the genetic diversity and geographic sharing of Bartonella spp. in diverse assemblages of bats and bat flies across Costa Rica.

To create global phylogenies, we trimmed obtained consensus sequences to 768 bp and aligned them to 45 genetic sequences: 28 from known Bartonella species, 12 Bartonella sequences from bats and bat flies in Costa Rica (8), 4 sequences from bats in Guatemala (9), and 1 sequence from Mexico (3). We used B. tamiae and Brucella melitensis as outgroups to root the tree. We created the alignment by using the multiple alignment program MAFFT (https://mafft.cbrc.jp/alignment/software), manually checked in MEGA X (https://www.megasoftware.net), and further refined with alignment refinement tool Gblocks version 0.91b (http://molevol.cmima.csic.es/castresana/Gblocks/Gblocks_documentation.html). We constructed the global phylogenetic tree by using Bayesian Markov chain Monte Carlo analyses (MrBayes 2.2.4, https://www.geneious.com) with 1 million generations and a burn-in fraction of 25% and determined the parameters for the nucleotide changes (MEGA X). 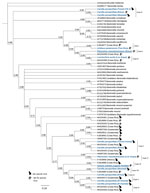 Bartonella prevalence from all samples, determined by PCR, was 14.3% (45/314), 10.7% (27/252) for bats and 29.0% (18/62) for ectoparasite pools (Table). Bartonella seems to be widespread and diverse in bats and bat flies in Costa Rica, where 6 of the 16 bat species and 9 of the 23 bat fly species were positive for the bacterium. Because of sequence quality, we included only 8 Bartonella sequences from bats and 6 from bat fly pools in phylogenetic analyses, which revealed 11 genetic variants, including 2 potentially new genotypes (93.2% similarity value; Figure; Appendix Table). These 11 genetic variants clustered into 9 clades of 96.0%–99.2% similarity.

Our results suggest that within Costa Rica variants are shared between bats and their flies in different parts of the country and in different years. For example, Bartonella sequences from Emus Cave (GenBank accession no. MW115627) and Túnel Arenal (GenBank accession no. MW115628) at opposite ends of the country (clade V; Appendix Figure) clustered together with sequences from a study conducted in Costa Rica in 2015 (8). In addition, Bartonella sequences from our study clustered with previously identified sequences from bats and bat flies from Guatemala (9) and Mexico (3), suggesting wide geographic distribution.

We also found a high level of diversity of Bartonella variants within caves and species (Figure). For example, Bartonella sequences from different bats (of same and different species) in Emus Cave clustered in 4 distinct clades. In addition, Carollia perspicillata bats, the most sampled species in our study, carried Bartonella with sequences from 6 distinct clades. This finding suggests that >1 Bartonella strain is circulating within bat species, even within the same cave.

In conclusion, we found Bartonella species to be diverse, prevalent, and potentially widely shared among species of bats and bat flies in Costa Rica and Mesoamerica. We expanded existing scientific knowledge on the prevalence and diversity of Bartonella in bats and bat flies in Costa Rica by including species that were not previously tested and described as positive by PCR for these bacteria. We also described 2 new Bartonella genotypes through phylogenetic analysis. Information about the dynamics of Bartonella in its natural hosts can be used to predict and avert further Bartonella emergence.

We thank the Anthros Speleology Group and Paula Ledezma-Campos for their assistance in the field and Hunter Seabolt and Christopher Phipps for guidance with molecular and phylogenetic analyses.