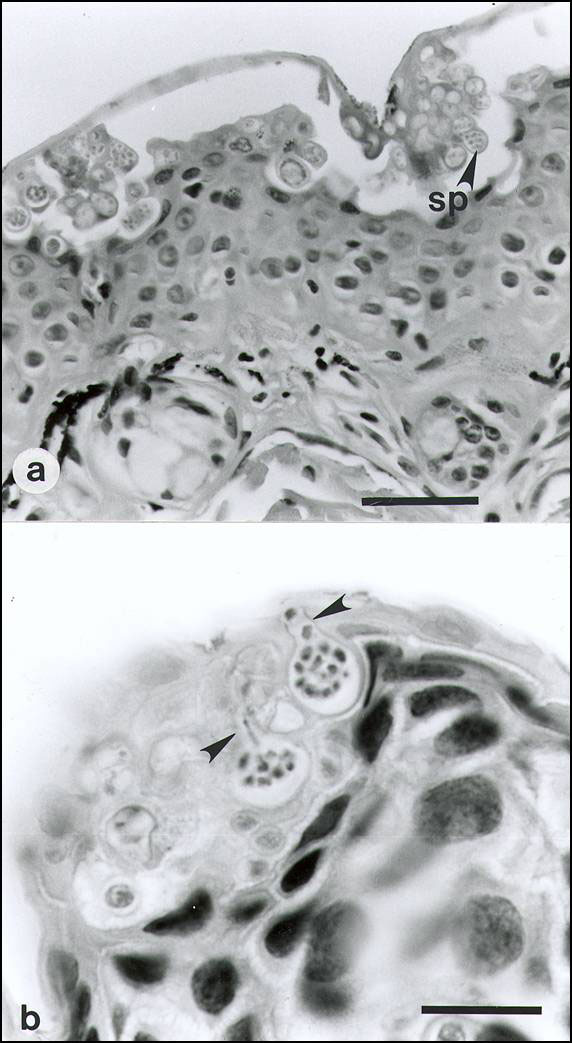 Figure 1. . A: Ventral abdominal skin of Bufo haematiticus from western Panama. The superficial keratinized layer of epidermis (stratum corneum) contains numerous intracellular spherical-to-ovoid sporangia (spore-containing bodies) of Batrachochytrium sp. The mature sporangia (sp, arrows) are 12-20 µm (n = 25) in diameter and have refractile walls 0.5-2.0 µm thick. Most sporangia are empty, having discharged all zoospores, but a few sporangia contain two to nine zoospores. This stratum corneum is markedly thickened adjacent to groups of parasitized cells and in some cases, the superficial layer has become detached. No chytrids are present in the stratum spinosum, stratum basale, dermis, dermal glands, and blood vessels. Note the absence of hyphae and lack of an inflammatory cell response in the deeper layers of epidermis and the dermis. Hematoxylin and eosin stain. Bar = 35 µm. 1b. Ventral skin of upper hind limb of Atelopus varius from western Panama. Two sporangia containing numerous zoospores are visible within cells of the stratum corneum. Each flask-shaped sporangium has a single characteristic discharge tube (arrow) at the skin surface. Exiting zoospores are visible in the discharge tubes of both sporangia. Hyperkeratosis is minimal in this acute infection. Tissues were fixed in neutral-buffered 10% formalin, paraffin-embedded, sectioned at 6 µm thick and stained with hematoxylin and eosin. Bar = 35 µm.

1Note that the relative number of mass death events decreases with increasing impact on population.