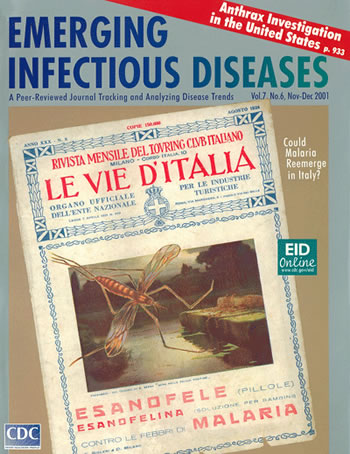 Le Vie d'Italia was established near the end of the 19th century in Milan as the monthly magazine of the Touring Club of Italy. Some 30 years later, in the 1920s, the magazine took on the additional role of Bulletin of the (then informal) National Organization for Tourism in Rome. Today, the magazine, which has been very popular, is still published by the Touring Club of Italy under the name Quì Touring.

In the center of this Le Vie d'Italia cover, under the image of the mosquito looming over the water, the inscription reads, "From the painting by E. Serra, Evening in the Pontine Marshes."The Pontine marshes, 50 Km south of Rome, were at that time the most malarious area of continental Italy–today the area is one of the most fertile plains in the country.

In the lower part of the cover, the Italian text reads, "Esanofele tablets, Esanofelina syrup for children, against malaria fever."Esanofele was produced by the F. Bisleri Company, which also produced a famous liqueur, Ferrochina Bisleri, probably an alcohol infusion of cinchona bark, herbs, and iron salts. In 1924, quinine was produced only under a state monopoly, so Esanofele was probably also an herbal preparation with perhaps some antimalarial activity due to the cinchona bark.