Eight fatal cases of tick-borne encephalitis with unusual hemorrhagic syndrome were identified in 1999 in the Novosibirsk Region, Russia. To study these strains, we sequenced cDNA fragments of protein E gene from six archival formalin-fixed brain samples. Phylogenetic analysis showed tick-borne encephalitis variants clustered with a Far Eastern subtype (homology 94.7%) but not with the Siberian subtype (82%).

Tick-borne encephalitis virus (TBEV) is one of many arthropod-borne viruses from genus Flavivirus (family: Flaviviridae) pathogenic to humans (1). Infection caused by TBEV is one of the most widespread natural foci infections in Russia; incidence varies from 5,593 to 10,298 cases annually and includes 89–166 deaths (2,3). The incidence of tick-borne encephalitis (TBE) increased sevenfold from 1974 to 1999 in Russia. The geographic distribution of the infection is uneven, with most illnesses occurring in the Siberian and Ural regions. In these regions, incidence is 10 to 30 times higher than in the Russian Far East region, where TBEV was discovered in 1937.

The major surface glycoprotein E is commonly used for studying phylogenetic relations of different TBEV strains. Analysis of the protein E sequence of 16 European and Asian TBEV strains showed clear segregation into three genetic subtypes, designated as European, Far Eastern, and Siberian (4). Genotyping of 75 TBEV strains typical for southern regions of Western Siberia showed that they differ considerably from European and Far Eastern strains (5–7). In reviewing published data, we found no substantial changes in the E gene in the Siberian subtype in 1981 to 1992 (8).

Our study was performed in the Novosibirsk Region of Western Siberia, where 243 to 534 cases of TBE are reported annually. We investigated retrospectively the first reported cases of lethal TBEV infection with hemorrhagic syndrome by using archival histologic samples. To determine the TBEV genotype that probably caused the hemorrhagic form of the infection, we sequenced cDNA fragments of protein E gene. We found that the TBEV strains that most likely caused the infection with hemorrhagic syndrome also carry unique mutations in protein E and belong to the Far Eastern genomic subtype.

Figure 1. Distribution map of tick-borne encephalitis (TBE) cases by district, Novosibirsk Region, Russia, summer 1999. Case-patients were defined as persons who died from May 1 to August 15, 1999, and who had...

In 1999, a total of 447 TBE cases confirmed by enzyme immunoassay were reported in Novosibirsk Region (Figure 1). Nine (2.0%) patients died; 72.9% of cases occurred in the city of Novosibirsk or its suburbs. The deaths of eight of these patients were associated with a pronounced hemorrhagic syndrome; symptoms included massive gastrointestinal bleedings and multiple hemorrhages in mucosa and internal organs. Four of the patients who died resided in the Toguchin District; the remainder lived in districts located near Novosibirsk (Figure 1). A total of 371 and 358 cases of TBEV infection confirmed by enzyme immunoassay and reverse transcriptase-polymerase chain reaction (RT-PCR) were reported in 2000 and 2001, respectively. In 2001, the mortality rate increased to 3.6%. Surveillance for TBEV during the summers of 2000 and 2001 identified no new cases of TBE with the hemorrhagic syndrome. This lack might be ascribed to the decrease in TBE incidence during this period, the change in the circulation of TBEV strains, and an unusual weather pattern during May and June.

By reviewing all available medical records, we retrospectively analyzed the eight cases of fatal hemorrhagic TBE infection. Diagnoses were confirmed serologically by testing for specific antiviral immunoglobulin M antibodies. All cases occurred in June and July 1999 after patients were bitten by ticks; the latent period was from 5 to 26 days (average 12.8). The ages of the patients ranged from 44 to 69 years. Disease onset included typical TBE clinical symptoms such as fever, myalgia, and malaise, followed by pronounced viral encephalitis accompanied by loss of consciousness, pareses, and paralyses. Hemorrhagic symptoms developed as massive gastrointestinal bleeding and local hemorrhages on mucosa and skin. The first sign of the hemorrhagic syndrome was erythrocytes in urine on day 7 of the infection, which is not usual for TBE infection. Common central nervous system manifestations occurred 3 days later. Patients died 2−3 days after the massive hemorrhagic syndrome developed, despite intensive treatment. The average time of death was 16 days after illness onset. Autopsies showed the pronounced hemorrhagic syndrome and viral encephalitis. Our retrospective screening of medical records from 1999 did not produce any evidence of a milder hemorrhagic syndrome in the rest of the case-patients.

Since hemorrhagic TBE has not been described previously, our objective was to determine the genotype of the virus. However, only six brain tissue samples from the fatal cases were available at the time this study was initiated. Archival samples of formalin-fixed brain tissue from the fatal hemorrhagic cases were collected in March 2000 and stored at −70°C. These samples had been stored for 8 to 9 months in 10% formaldehyde solution at room temperature at the pathology laboratory of the First Municipal Clinical Infectious Hospital of Novosibirsk. Viral RNA was isolated from formalin-fixed brain tissue by using the modified protocol described by Masuda et al. (13) and Coombs et al. (14). The RT-PCR system (GeneAmp RNA PCR Kit, Perkin-Elmer, Branchburg, NJ) was developed for detection of TBEV. RT-PCR primers were designed by using conserved DNA regions encoding gene E of TBEV, strain 205: 5′-TGCACACAYYTGGAAAACAGGGA-3′ (TBE913F), 5′-TGGCCACTTTTCAGGTGGTACTTGGTTCC-3′ (TBE1738R). The sense primer 5′-CAGAGTGATCGAGGCTGGGGYAA-3′ (TBE1192F) and antisense primer 5′-AACACTCCAGTCTGGTCTCCRAGGTTGTA-3′ (1669R) were used for second round of PCR. 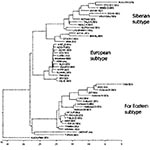 The amino acid sequence of hemorrhagic TBE has higher homology with the Far Eastern subtype (98%) than with the Siberian subtype (96%). We identified 13 different amino acid mutations in six sequenced fragments of protein E (Table 2). These mutations were not previously described for TBEV; however, most of them (except 121C, 244L, and 249A) were found among other flaviviruses. Cysteine 121 is highly conserved among all flaviviruses since it is involved in maintaining the protein E 3D structure through a disulfide bridge with cysteine 92. Substituting cysteine 121 for glycine in the Koltsovo 31 TBEV variant might cause dramatic changes in protein E structure and function.

Long-term surveillance in Siberia indicates that persons with TBEV infection have relatively mild fever; death occurs in 1% of patients (2). The high incidence of TBE in Western Siberia is attributed to the active circulation of Siberian TBEV variants (3,6,7). By sequencing a fragment of protein E, we found these variants grouped to a separate subtype (Siberian). Overall, 75 protein E sequences of TBEV variants isolated in 1952 to 2002 in different regions of Russia were published. Of these virus isolates, 46 were collected directly in the suburbs of Novosibirsk (8). Our study showed that Siberian variants have approximately 78% to 81% homology in protein E genes with the Far Eastern TBEV subtype.

Our sequencing data showed that the genome of hemorrhagic TBEV variants differs from already known Siberian TBEV and OHFV strains. Variants of hemorrhagic TBEV show the highest degree of homology with the Far Eastern subtype, represented by prototype strains 205 and Sofiin. This finding supports our hypothesis that a relationship exists between the occurrence of unusual clinical disease and emergence of new TBEV variants in the Novosibirsk Region.

Dr. Ternovoi is a senior researcher at the Laboratory of Molecular Biology of RNA Viruses, State Research Center of Virology and Biotechnology VECTOR, Koltsovo, Novosibirsk Region, Russia. He specializes in the diagnosis, identification, and molecular characterization of viral pathogens (i.e., flaviviruses, Ebola virus, and hepatitis A). His research interests include the mechanisms of gene expressions and the role of some viral peptides in developing immune response to prevent viral infection.

We thank E.G. Sacharova and N.Y. Chernousova for their assistance in epidemiologic control of tick-borne encephalitis virus infection in Novosibirsk in 1999 to 2001.